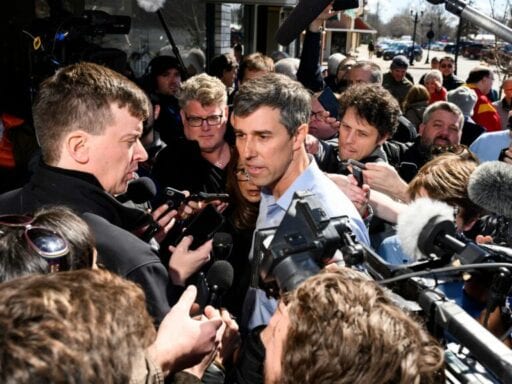 They did so after senior Breitbart editor Joel Pollak published an article lamenting that he was asked to leave a Beto O’Rourke campaign event at Benedict College, a historically black college in South Carolina, earlier that day — a move Pollak and others saw as an attack on the freedom of the press.

“[W]ith his poll numbers falling in the Democratic presidential primary, O’Rourke has decided that he is entitled to abuse members of the press who cannot be relied upon to provide favorable coverage,” Pollak wrote, hyperbolically, before going on to explain how he was asked to leave by a campus police officer after a staffer read the press credential on his chest.

The reality is that, though Pollak may fit some definitions of journalist, he is more of a Trump-supporting provocateur. Still, news that the O’Rourke campaign singled him out and asked him to leave an event struck some as a bad look. On Wednesday, a number of journalists at major mainstream outlets — including at least two from the New York Times — shared Pollak’s story, and denounced the O’Rourke campaign’s handling of the situation.

This is WRONG and hypocritical for any candidate, or come
to think of it, any American https://t.co/leXWobEiZe

No matter what you think of Breitbart, this is wrong. No campaign should be deciding who gets to cover its events. An event is either open to the press, or it is not. Freedom of the press is not a conditional right — it applies to every American regardless of their views. https://t.co/BHFxslRxjL

The O’Rourke campaign, however, doesn’t seem to have regrets about the way the situation was handled. In a statement sent to Vox, campaign national press secretary Aleigha Cavalier justified Pollak’s removal by writing that “[g]iven this particular Breitbart employee’s previous hateful reporting and the sensitivity of the topics being discussed with students at an HBCU, a campaign staffer made the call to ask him to leave to ensure that the students attending the event felt comfortable and safe while sharing their experiences as young people of color.”

But whether you agree with the O’Rourke campaign depends on whether you think Breitbart is a journalistic organization or something else. And Breitbart has certainly given critics lots of reason to take issue with those who are echoing Pollack’s grievances.

Breitbart has a dubious place among journalistic outlets

Breitbart rose to national prominence riding the coattails of Steve Bannon, who in 2016 went from being the site’s executive chairman to a top Trump campaign strategist, and ultimately took a job in the Trump White House. It’s undeniable that the site has a long history of pushing bigoted content and behaving more like a right-wing political action committee than a journalistic outlet. The site once included a “black crime” section, and it has published stories with headlines like, “Trannies 49Xs Higher HIV Rate,” “Birth Control Makes Women Unattractive and Crazy,” and “Hoist it high and proud: The Confederate Flag Proclaims A Glorious Heritage.”

Breitbart may have toned things down a bit in recent years, but the site still pushes right-wing misinformation. Pollak himself, for instance, has repeatedly dismissed the factually true observation that Trump defended white supremacists after the violent Charlottesville rallies — comments that were recorded on video — as a “hoax,” arguing that when Trump said there were “very fine people” on both sides of the rallies, he was referring merely to people who opposed the removal of Confederate monuments (the rallies were organized by avowed white nationalists).

In fact, following an O’Rourke event on Monday, Pollak published an interview with the candidate in which he asked him a series of gotcha questions about the purported “Charlottesville ‘very fine people’ hoax” (which is in fact a direct quote of the president). The next day, Pollak was asked to leave.

As Pollak notes in his article about being asked to leave the campaign event, he has been a regular guest on MSNBC on CNN. But his appearances on cable news certainly indicate he’s anything but that he’s a real reporter. For instance, in one memorable late 2017 CNN interview, Pollak attempted to defend then-Republican US Senate candidate Roy Moore against allegations that he molested children and sexually assaulted teenagers by citing a lyric from a song popularized by Ringo Starr more than 40 years ago.

“You know, in 1973 Ringo Starr hit number one on the Billboard charts with the song, ‘You’re 16, you’re beautiful, and you’re mine,’” Pollack said, as host Chris Cuomo looked on in disbelief. “He was 30-something at the time singing about a 16-year-old — you want to take away Ringo Starr’s achievement?”

At that time Breitbart was still run by Bannon, and Moore was one of the site’s darlings. In fact, its support for Moore may have gone beyond merely defending him against a string of misconduct allegations — the Washington Post reported last year that two Breitbart writers were contacted for a potential story as part of an alleged scheme to bribe a lawyer who was representing one of Moore’s accusers. Breitbart has denied any knowledge of a bribery scheme.

Bannon was forced out as Breitbart’s executive chair shortly after Moore’s campaign ended in defeat, in part because comments he made to author Michael Wolff in his bestseller, Fire and Fury, alienated Rebekah Mercer, one of the site’s key funders. Some of those comments painted an unflattering portrait of the publication.

My favorite Steve Bannon quote in ‘Fire & Fury’ is when he acknowledges that the website he ran — Breitbart — isn’t a fully “legitimate” publication pic.twitter.com/6CKD0tnbnn

Breitbart has been in the wilderness since. The Washington Post reported last month that since Trump’s inauguration, Breitbart’s “monthly traffic has virtually collapsed, plummeting nearly 75 percent.”

Pollak’s story has made the website relevant again, at least for one news cycle. But that some prominent journalists regard the O’Rourke campaign kicking Pollak out of an event as a violation of “freedom of the press” is dubious — candidates have a prerogative to credential whichever outlets they choose, and it makes sense that the O’Rourke campaign would exclude one with a history of racism from covering an event at a historically black college.

As O’Rourke press secretary Aleigha Cavalier went on to note in the statement she sent to Vox, “whether it’s dedicating an entire section of their website to ‘black crime,’ inferring that immigrants are terrorists, or using derogatory terms to refer to LGBTQ people, Breitbart News walks the line between being news and a perpetrator of hate speech.” And that characterization is hard to dispute.

These senators are going after the biggest climate villains in Washington
The US and the Taliban are inching closer to a peace deal. It could all still fall apart.
Georgia’s unusual unemployment benefits rule lets some workers fall through the cracks
This pregnant black mom was accused of hiding stolen goods under her shirt
Congress is running out of time to extend expanded unemployment insurance
2 winners and 4 losers from Trump’s 2020 reelection campaign launch