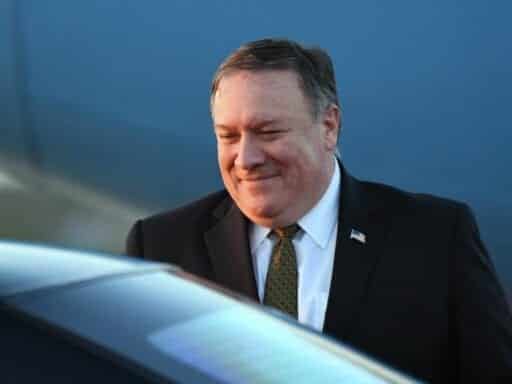 Secretary of State Mike Pompeo wants you to believe North Korea just gave up something big. It didn’t.

Secretary of State Mike Pompeo said on Monday that he and North Korean leader Kim Jong Un made “significant progress” over the weekend toward dismantling Pyongyang’s nuclear program. The problem is it’s not clear what advancement he’s pointing to.

The two met for a nearly three-hour summit in Pyongyang on Sunday to discuss a way to break the impasse in discussions. Speaking after the meeting on Monday, Pompeo told reporters that North Korea has agreed to let international inspectors visit Punggye-ri, the site of all six of North Korea’s nuclear tests. In September 2017, Pyongyang tested a nuke there that was around seven times stronger than the bomb America dropped on Hiroshima in 1945.

Letting inspectors visit the facility may sound well and good, except for one thing: It’s already been destroyed.

North Korea blew up that facility in May. And although the country’s leaders had originally invited international inspectors to witness the demolition, they changed their minds and said they would only allow a small group of foreign journalists to watch. CNN, for example, could only watch the destruction from about 1,600 feet away.

Letting inspectors in now to verify that the site is, in fact, destroyed is certainly a welcome step. After all, North Korea has been reluctant for years to let outsiders into its nuclear facilities and question officials at the sites. And while it’s unclear how much access the inspectors will get, it’s understandable that Pompeo is touting this as a victory.

“We made significant progress, we’ll continue to make significant process, and we are further along in making that progress than any administration in an awfully long time,” Pompeo told reporters on Monday.

But experts are skeptical that this move actually represents any meaningful “progress” toward denuclearization.

“Arguably the least interesting nuclear site to inspect in North Korea is the defunct, abandoned former testing facility at Punggye-ri,” Mark Groombridge, who used to advise National Security Adviser John Bolton on Asian affairs, tells me. “Who is Pompeo trying to kid? … This gets more comical by the meeting.”

He’s not alone in that analysis. “Kim committed to closing these sites six months ago. He is milking them by offering them up piecemeal. It’s brilliant,” says Vipin Narang, a nuclear expert at MIT. “He’s selling the same horses twice and we are buying.”

It seems the administration is grasping for tangible wins to prove to critics of current talks that they are actually making progress. For example, the secretary also said on Monday that he hopes North Korea will allow inspectors into a “missile engine testing site” — likely the one at Tongchang-ri — soon. However, experts tell me Pyongyang doesn’t actually need that site anymore either, which makes Kim’s latest offers less significant than they seem.

Pompeo’s visit, however, might have succeeded in another way.

A second Trump-Kim summit may be on the horizon

The US and North Korea remain in a stalemate over how to dismantle Pyongyang’s nuclear program.

Washington wants Pyongyang to destroy much of its nuclear arsenal upfront and offer an inventory list of all parts of its program. Kim’s regime, meanwhile, wants President Donald Trump to sign a peace declaration — a nonbinding document that would formally end the Korean War — before Pyongyang makes any concessions.

Experts are split on whether that’s a good idea. Those who want the US to sign the agreement say it’s costless because it’s nonbinding, and therefore America has nothing to lose and everything to gain by signing it.

Others disagree, claiming that signing the declaration will make it harder for the US to criticize North Korea’s poor human rights record, for example. Further, some in the administration — including Secretary of Defense Jim Mattis — fear it would give Kim greater leverage in asking the US to remove its 28,500 troops from South Korea.

But Pompeo has had trouble breaking the impasse in part because Trump promised Kim during their June Singapore summit that he’d sign the peace declaration. But since then, Pompeo has kept asking for concessions from the North Koreans first, causing Kim’s regime to bristle and ask to deal directly with Trump instead.

After their meeting last weekend, both Pompeo and Kim said their sides have begun planning for a second Trump-Kim summit. It’s unclear when and where it will take place, but some experts tell me it’s likely both leaders will sign the peace declaration at the event.

If that’s the case, Pompeo’s trip may have ultimately proven successful. After all, it’s kept US-North Korea talks ongoing despite the tense stalemate. Stalled negotiations with a chance of a later breakthrough are surely preferable to the return of the specter of war.

“I think the aim of this meeting was to get another meeting,” Narang told me. “And on that count, it succeeded.”

The New York state presidential primary is back on after a federal court ruling
Why these scientists still doubt the coronavirus leaked from a Chinese lab
Congress’s new plan to end surprise medical bills, explained
Read John McCain’s final letter to America
Teen girls are now poisoning themselves at alarming rates. There are ways to help.
A life insurance company wants to track your fitness data