Why people are mad about a list of Trump donors online 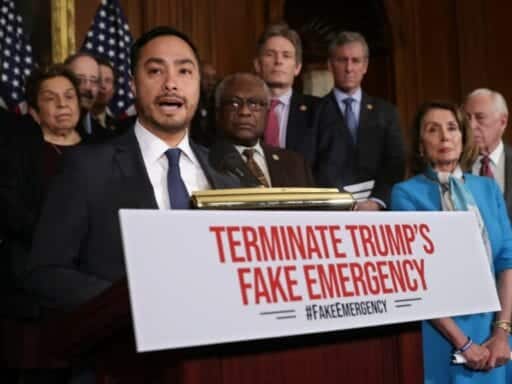 Take note: If you donate to a political campaign, some of your information will probably be made public.

Rep. Joaquin Castro (D-TX) is under fire for tweeting out a list of donors to President Donald Trump. Why the maneuver is so controversial isn’t entirely clear: It’s all information that was already public.

The Texas Democrat and brother to 2020 Democratic presidential candidate Julián Castro on Monday tweeted a list of 44 San Antonio donors who contributed the maximum amount under federal law to Trump in 2019. “Sad to see so many San Antonians as of 2019 maximum donors to Donald Trump,” he wrote, calling out a couple of the city’s better-known donors by their Twitter handles. “Their contributions are fueling a campaign of hate that labels Hispanic immigrants as ‘invaders.’”

Sad to see so many San Antonians as 2019 maximum donors to Donald Trump — the owner of ⁦@BillMillerBarBQ⁩, owner of the ⁦@HistoricPearl, realtor Phyllis Browning, etc⁩.

Their contributions are fueling a campaign of hate that labels Hispanic immigrants as ‘invaders.’ pic.twitter.com/YT85IBF19u

Castro’s tweet came after two mass shootings over the weekend in El Paso, Texas, and Dayton, Ohio, that left 31 people dead and dozens others injured. The El Paso shooter reportedly targeted Latinx people and posted a manifesto online warning about a “Hispanic invasion” of the United States, mimicking the president’s language.

Some observers — and not just those across the aisle — cried foul on Castro’s tweet, arguing that it unfairly put the spotlight on Trump donors and potentially put them in danger by publicizing their names and professions.

“Targeting and harassing Americans because of their political beliefs is shameful and dangerous,” said House Minority Leader Kevin McCarthy, who blamed the weekend’s shootings on video games, in a tweet. “What happened to ‘When they go low, we go high?’ Or does that no longer matter when your brother is polling at 1%? Americans deserve better.”

But it isn’t as though what Castro tweeted out was secret information. Thanks to how campaign contribution laws work under the Federal Election Commission, it’s data anyone could look up.

This is, in part, a discussion about privacy and what level of publicity donors to political campaigns do and do not deserve. But it’s also a conversation about how much the president’s supporters should be held accountable for his rhetoric and its implications.

“No one was targeted or harassed in my post. You know that,” Castro tweeted in response to McCarthy. “All that info is routinely published.”

President Trump reacted to Castro’s tweet on Wednesday evening, saying on Twitter that he didn’t know who the congressman was “other than the lesser brother of a failed presidential candidate.” In the original version of the tweet, Trump misspelled Rep. Castro’s first name.

I don’t know who Joaquin Castro is other than the lesser brother of a failed presidential candidate (1%) who makes a fool of himself every time he opens his mouth. Joaquin is not the man that his brother is, but his brother, according to most, is not much. Keep fighting Joaquin!

If you donate to a political candidate, some of your information will probably be made public

The graphic Castro tweeted out, which according to Politico came from a Democratic activist group, doesn’t contain secret information. It’s data that, because of how federal campaign finance laws work in the United States, is already out there.

According to FEC guidelines, individuals can contribute up to $2,800 to federal candidates per election — that means they could, for example, give that maximum for the primary and general election, meaning $5,600 combined. Cash contributions of $50 or less can be anonymous. Once contributions add up to more than $200 during a two-year cycle to a certain candidate, then campaigns have to report them to the FEC, including the amount, date of receipt, and the contributor’s name, address, occupation, and employer. That information can then be accessed on the FEC’s website or on websites that aggregate that information, such as OpenSecrets.

The point of all of this is pretty straightforward: It’s a way to keep campaigns accountable and make sure they’re following the laws, and it also increases transparency for voters to see who is backing campaigns. Of course, not all political donations face such limitations. Super PACs can take in unlimited amounts of money, though they have to report their donors, and political nonprofits, or “dark money” groups, don’t have to publicly say who’s giving to them at all.

The Trump donors Castro listed are ones who purportedly donated the maximum to the president, meaning they’re well over the $200 threshold for their contributions to be made public.

That’s not to say that the conversation isn’t without nuance. It’s one thing to know your donation is going to end up in an FEC database where people have to search for it, it’s another for your contribution to show up on a member of Congress’s Twitter account. And yes, news outlets regularly have stories about who’s backing campaigns and hosting fundraising events, but they’re often focused on big-name donors and hyper-rich individuals.

People in the United States are allowed free speech, including when it comes to their political preferences and donations. But that speech is also often public, especially in the age of the internet where information is so easily accessible.

A lot of people are mad about Castro’s tweet

Though the list Castro tweeted out was public information, many people were still opposed to it. They complained that it unfairly targeted donors, including business owners and retirees, for potential harassment and called for Castro to rescind it and apologize.

Multiple Republicans called Castro out. “People should not be personally targeted for their political views. Period. This isn’t a game. It’s dangerous, and lives are at stake. I know this firsthand,” said Rep. Steve Scalise (R-LA), who was shot at a congressional baseball game in 2017, in a tweet.

Sen. Ted Cruz (R-TX) called for Castro to retract the tweet and called for everyone to tone things down. He also said the tweet amounted to “doxxing.”

Some reporters criticized Castro as well.

“I don’t want to put these people’s names in my feed because this is dangerous, by any campaign,” tweeted New York Times reporter Maggie Haberman. Journalist Yashar Ali wrote that Castro’s tweet was a “terrible and dangerous precedent to set.”

Trump campaign spokesperson Tim Murtaugh wrote that Castro was at the very least “inviting harassment” to private citizens. In a separate statement to the Washington Post, Murtaugh said that “no one should be targeted for exercising their First Amendment rights or for their political beliefs” and called for Castro to delete the tweet and apologize, and for his brother’s campaign to disavow it.

The president’s son Donald Trump Jr. in an appearance on Fox & Friends on Wednesday, compared Castro’s tweet to the alleged “hit list” and “rape list” the Dayton shooter reportedly kept while in high school.

Others, however, pushed back and jumped to Castro’s defense. Some people pointed out that doxxing is when private information, such as a phone number and address, is published online. And, as mentioned, this information was already public.

As regards the faux outrage by conservatives in response to Joaquin Castro’s tweeting of the names and occupations of his constituents who maxed out their donations to Trump, here’s a website where such public info is readily available to all who want it.https://t.co/BWepCtyZa0

.@JoaquinCastrotx is right to name publicly those who are funding Trump’s hateful ads, ads that put Hispanic lives at risk. That’s all public information. There’s no basis to complain of what Rep. Castro is doing to shine light on it.

Castro is also refusing to back down. In an appearance on Morning Joe on Wednesday, when pressed on whether the people on the list would now be harassed, Castro said he wants the donors “to think twice about supporting a guy who is fueling hate in this country.”

Julián Castro’s campaign appears to have no plans to disavow the tweet. “Trump and his right-wing enablers whine about publicly available information being released because they want to distract from his role in fueling the kind of racism, bigotry, and white nationalism that we saw in El Paso this weekend,” said campaign spokesperson Sawyer Hackett in an email to Vox. “It’s pathetic.”

It’s also worth noting this type of controversy isn’t particularly new. As one Twitter user pointed out, in 2009, a similar controversy erupted around efforts to publicize information about donors who had supported California’s same-sex marriage ban.

There have long been concerns about the president’s rhetoric and the ways in which it stokes racist and anti-immigrant sentiment. And it’s not just at rallies and on Twitter where Trump often warns about immigrants invading the United States or finds new migrant caravans to stoke fears about — it’s also part of his paid advertising plan.

As Thomas Kaplan at the New York Times pointed out, Trump’s reelection campaign has posted over 2,000 ads on Facebook using the word “invasion,” and generally, they’ve been about immigration. While the El Paso shooter has said his anti-immigrant beliefs predate Trump, it’s impossible not to notice the parallels: His reported manifesto says that his attack “is a response to the Hispanic invasion of Texas.”

Donors to Trump’s campaign are directly fueling his advertising — they give to his campaign and then his campaign pays Facebook to run the ads. Whether they should be publicly shamed for it might be debatable, but that this is where their money is going is undeniable.

Castro said on Morning Joe that was part of the point. “My post was actually a lament. If you look at my language, I said that it’s sad that these folks, many of whom are prominent business owners in San Antonio, a city that’s about 65 percent Hispanic — their customers, the people that have made them wealthy, their employees, the people that have worked for them for years, many of those folks are Hispanic. And they’re giving their money to a guy who’s running ads talking about Hispanics invading this country.”