Why Pete Buttigieg is suddenly surging in the polls 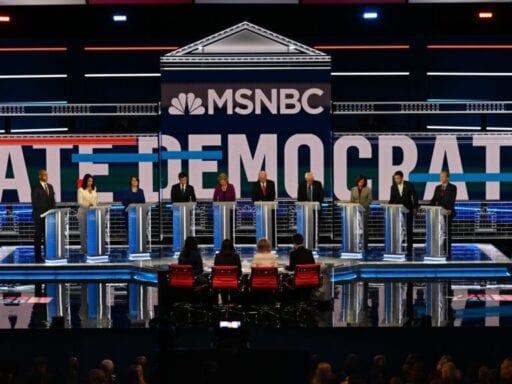 Vox’s Today, Explained podcast covers what we learned from the November Democratic debate.

The fifth Democratic debate in the 2020 election cycle came after multiple days of public hearings in the impeachment inquiry. So, naturally, the moderators kicked off the night with the topic. Beyond impeachment, the debate didn’t feature too many robust policy conversations. But we did learn more about some of the candidates through questions about income inequality, the environment, and race. Vox’s Ella Nilsen joins host Sean Rameswaram on this episode of Today, Explained, Vox’s daily explainer podcast, to break it down.

The debate also proved that the top tier of candidates is fluid. Polling has remained steady with Vice President Joe Biden and Sens. Elizabeth Warren and Bernie Sanders consistently in the lead. Recently, South Bend, Indiana, Mayor Pete Buttigieg has joined the list of candidates pulling ahead of the pack.

A lot of the other main candidates in this race, they were sort of very well-known before the primaries started. Bernie Sanders, Elizabeth Warren, Joe Biden. Those were sort of big heavyweight celebrities. Pete has really sort of had to bootstrap a campaign, like literally nobody knew who he was when he started. It seemed like a joke candidacy.

But he was incredibly available to the media, he went on all kinds of podcasts everywhere. He went on The Weeds. Then he became quite popular with donors. He raised a ton of money. And now he is running TV ads strategically in the early states. And the ads seem to be working. You know, he’s still behind, obviously, but it’s been a real kind of success story out of a very big field.

I think something that Pete appeals to is people who like the idea of a more moderate Democrat, somebody who will not frighten the voters with radical positions, but who is still something of an outsider, something of a fresh face, right? That, you know, there’s a sense that you need somebody who is not part of this system and not part of the establishment, but also isn’t a frightening radical. At the same time, you hear incredible hostility to him from, like, members of Congress, right? Democratic Party elected officials really see him as a guy who’s like jumping in line. It offends their sensibilities as professional politicians to see somebody that young with that thin a resumé. Something on top of the polls for Iowa caucuses.

Is his resumé that thin? I mean, he’s a veteran. He is an elected official. He speaks more languages than your average American. Is he unqualified?

But as a resumé for a president, it’s very unusual. I mean, South Bend, Indiana, is a small city, right? It’s the fourth-largest city in Indiana. And the idea of making the leap from there to the presidency with nothing in between is very unusual. Trump has obviously changed the rules of the game, but to people who have made careers in politics, right, Amy Klobuchar was district attorney and now she’s been a senator for a long time and now she’s running for president. And there’s this guy who has been mayor of a city of 100,000 people. And now he’s like, “I’m going to be president.” And it rubs a lot of people the wrong way.

What is he actually running on?

He early on made a big deal out of political reform. He talked a lot about the importance of changing the filibuster, of looking at changing how the judicial system works and really emphasizing the need to democratize the political process.

Then on policy substance. You know, he’s offering what would have been considered a very progressive agenda 10 years ago but looks moderate today. And that’s a big sort of public option plan. He calls it Medicare For All Who Want It, some increased funding for college and other educational subsidies. He’s got a sort of what he calls a Douglass plan for black America. I’d say it addresses redlining, a lot of issues like that. It’s not shocking stuff, right? He’s very much from the center of the Democratic Party today. What was distinctive about him in his early presentation was really that emphasis on political reform, which he has emphasized a little bit less more recently and instead has drawn the contrast on health care with Sanders and Warren.

And just for the fun of it, how do you think someone like Mayor Pete matches up against Trump in a potential general election?

In some ways he cuts an appealing contrast with Trump, right? He’s young. He actually served in the military. He’s like a physically vigorous guy against this oldster. He’s very good, very quick on his feet. You know, good at answering extemporaneous questions. He seems knowledgeable in a way that Trump isn’t. At the same time, you know, if you’re thinking about Trump’s key electoral wins with white working-class voters in the northern Midwest, Buttigieg, you know, he will emphasize his Midwestern ties and the fact that South Bend is a post-industrial city.

But really, he’s the mayor of a college town, right? And his whole biography is in sort of elite professional circles. Right. Harvard, McKinsey. He goes back to his hometown. But he didn’t grow up there because his dad was a retired auto worker. His dad was a college professor. And you’ve got to wonder, right, does Pete have the connection with the right kind of voters to come and win? He’s he’s very weak in the primary with African Americans. And he doesn’t seem to have the persona to sort of get those white working class Obama-to-Trump switchers. At least, that would be my concern about him, more than, you know, can he go toe to toe verbally with Donald Trump? I think absolutely.

That being said, he is doing well in Iowa with a lot of middle-class voters.

In the early states where he’s advertised, he’s doing very, very well. In national polls, you know, he does well with sort of white college graduates, right. That’s sort of his core base of support. So, you know, that works in an Iowa caucus. It works potentially in a New Hampshire primary. And the question for him is going to be, can he broaden that base of support, right? If he wins in Iowa, he will get a surge of positive coverage that should give him a boost elsewhere. But how big of a boost and, in particular, can he make any kind of headway with African American voters? Because you see polls like of South Carolina where he’s getting zero percent of the black vote. And that’s not a winning strategy in a Democratic primary.

That being said, he’s come a long way. He’s doing well in Iowa, which is like, what, two-and-a-half months away at this point. Is there a chance that, you know, a surge in Iowa could mean that Mayor Pete’s gonna be a lot more prominent player in this race?

You never want to discount the guy who’s leading in the early states. That’s a big deal. It means something. It means other candidates will go after him. You know, at the same time, to keep it in perspective, right? What you really have here is a fascinating story. This guy nobody had heard of, this small city mayor getting into the conversation is much more interesting than the former Vice President kind of hanging out at 30 percent for months, but still 8 percent is not 30 percent.

Joe Biden is the guy who’s in first place. He’s been in first place. Warren and Sanders are nipping at his heels. Pete is way behind, right. The odds of him winning still seem pretty low to me. But it is the most interesting political story; how has this guy gone from nowhere to somewhere? But then the question is, can he go from somewhere to actually winning? That’s still a very uphill battle.

Disney’s Lion King remake is just like the original, but without the magic
The most important IPO for Silicon Valley in 2019 comes from Saudi Arabia
Vox Sentences: Disarray down under
Michael Avenatti, Stormy Daniels’s lawyer and potential presidential candidate, explained
Vox Sentences: The Facebook Papers
Australia wants the US to investigate a police attack on 2 Australian reporters