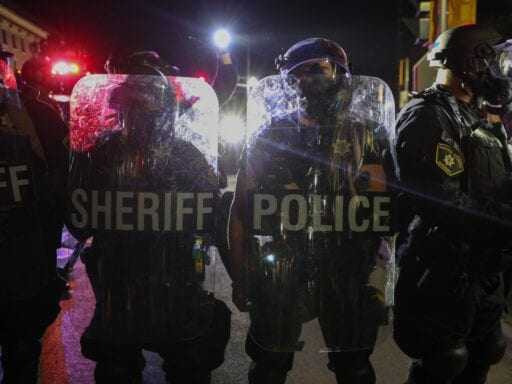 Police in Wisconsin told armed militia members that “we appreciate you guys.” Some new research helps us understand the racial roots of their irresponsible behavior.

Kyle Rittenhouse, the 17-year-old charged with murder in the shooting deaths of two people during the violent protests in Kenosha, Wisconsin, had a run-in with the police earlier in the night — an extremely friendly one.

In footage from about 15 minutes before the shootings pieced together by the New York Times’s Visual Investigations team, you can see Rittenhouse walk up to an armored police vehicle and chat with officers. A police officer pops out of one vehicle’s hatch and tosses bottles to Rittenhouse’s associates, members of an armed militia. “We appreciate you guys, we really do,” the officer says before driving off.

The young-looking Rittenhouse is under the legal age for firearm ownership and was carrying an assault rifle, which appears to be a misdemeanor under Wisconsin law. Instead of stopping him and asking for proof of age, the police give him water and an attaboy. And when he tried to surrender after the shootings, the police went right by him, even as bystanders were telling them that Rittenhouse had shot people.

How can we understand this behavior? Why do the police in Kenosha seem perfectly fine with armed militia members patrolling the streets — behavior that, just minutes later, ended with two people dead? Shouldn’t police want to be the only ones with guns?

A recent paper by University of Arizona sociologist Jennifer Carlson offers some insight into the police’s behavior. She conducted dozens of hours of interviews about guns with 79 police chiefs in three states — Michigan, California, and Arizona — to try to better understand the way police see armed civilians.

“Police chiefs articulated a position of gun populism based on a presumption of racial respectability,” Carlson writes. “‘Good guys with guns’ were marked off as responsible in ways that reflected white, middle-class respectability.”

This helps us understand what happened in Wisconsin as not a bug in the code of American policing, but a feature. There’s a reason anti-police violence protesters have been met with crackdowns, while armed anti-lockdown protesters could menace the Michigan Capitol without incident.

Police — who are heavily white, heavily male, and overwhelmingly conservative politically — see guns as a scourge when they’re in the wrong hands. But the “wrong hands” tend to be Black and brown ones. When respectable-seeming white people arm themselves, police welcome their intervention — even, or perhaps especially, in a tense situation where the potential for escalation to violence is really high.

This is not a new phenomenon; there’s a long history of deeply racialized gun politics in America. In 1967, a group of Black Panthers carried guns in a demonstration outside the California statehouse; shortly thereafter, then-Gov. Ronald Reagan signed a bill banning open carry of loaded firearms.

Carlson’s study illustrates how this racial gun politics operates at the level of the streets as well as the statehouse. Officers have significant discretion in how they choose to react to different situations; this discretion is often used in racist and violent fashion. The way the police seemingly encouraged Rittenhouse’s vigilantism is a microcosm of some of the most fundamental problems in American policing.

The “gun populism” of American police

In her research, Carlson distinguishes between two kinds of attitudes police have toward civilian ownership of firearms.

The first, “gun militarism,” sees armed individuals as a threat to blue lives. “It favors a state monopoly on legitimate violence, whereby police both protected and expanded their own access to firearms while policed and delimited gun access among the racialized, urban populations targeted by the War on Crime,” she writes.

At other times, the police chiefs she interviewed embraced “gun populism”: the idea that “rather than a threat to stability (as under gun militarism), armed civilians may be imagined as generative of social order.” Gun populism is an “embrace of ‘the people’ and a deep suspicion of elites, especially elite lawmakers who aim to regulate gun access in the United States.” In essence, it’s the National Rifle Association view of gun rights.

These two frames might seem contradictory. How can you believe both that widespread gun ownership poses a threat to your officers and oppose regulations that aim to limit it?

Typically, officers got around this dilemma by reference to legal and illegal uses of firearms. The chiefs supported throwing the book at armed criminals, believing that anyone who uses a gun in commission of a crime should face serious jail time. But gun ownership itself should be permitted and maybe even encouraged.

But here’s the thing: When they talked about gun-wielding criminals, the racialized nature of the language was unmistakable. The criminals they were worried about were described as “urban terrorists,” “gangbangers,” and “illegal immigrants”; their descriptions of respectable gun owners had a very different racial valence.

“I am not worried about the people who just want an assault weapon for the hell of it, or a military guy who had an M16 and wants one because it reminds him of his old gun,” one California police chief said. “I’m worried about the gangster who brings in guns and then it gets into the hands of people who have hatred for America”

This bifurcation, between minority-coded bad guys and presumptively white good guys, led chiefs to take a generally positive view of civilian gun owners who didn’t fit their criminal stereotypes. In Michigan, which borders Wisconsin and has similar gun laws, police chiefs embraced a vision of gun populism that saw civilian gun owners as their allies.

“Michigan chiefs insisted that even the best-resourced police cannot protect all victims at all times and thus opted to devolve some prerogatives onto private civilians as part of their overall crime-fighting mission,” Carlson writes. “They understood the capacity among civilians for private legitimate violence as supplementing public legitimate violence.”

A comment from one Michigan police chief, who works in a majority-white neighborhood, crystallized the sentiment.

“I believe that citizens need to be able to protect themselves. We cannot protect them — we just can’t. It’s impossible,” the chief said. “The government cannot save people from danger. That is just ridiculous. So people should be allowed to defend themselves.”

As with all forms of right-wing populism, however, the real action is in the definition of “the people.” Certain kinds of people tend to be seen as legitimate rights-bearers, as people who presumptively deserve the benefit of the doubt when carrying weapons.

Others don’t. And that’s where things get dicey.

How “gun populism” helps us understand the police reaction in Wisconsin

In November 2014, Cleveland police officers shot 12-year-old Tamir Rice, who was Black, from point-blank range. The police, who had described Rice as “maybe 20” on the radio, claimed they feared for their life because he was holding a “black revolver.” It was actually a toy gun.

The contrast between the treatment of Rice and Rittenhouse couldn’t be clearer. Rice scanned to police as a threat, despite being a child with a toy gun. Rittenhouse, a teenager with an actual rifle, did not.

Now, Cleveland and Kenosha are different places with different police officers; there are lots of reasons the ending to these two stories wasn’t the same. But there’s ample reason to believe that the mental shortcuts and stereotypes officers have for what kinds of people with guns are threats really do affect the way they treat people — for whether they default to “gun militarism” or “gun populism” in how they treat an armed civilian.

The reasons are rooted in basic human psychology. Police officers work a difficult job for long hours, called upon to handle responsibilities ranging from mental health intervention to spousal dispute resolution. While on shift, they are constantly anxious, searching for the next threat or potential arrest.

Stress gets to them even off the job; PTSD and marital strife are common problems. It’s a kind of negative feedback loop: The job makes them anxious and nervous, which damages their mental health and personal relationships, which raises their overall level of stress and makes the job even more taxing.

According to Phillip Atiba Goff, a psychologist at John Jay College and the CEO of the Center for Policing Equity think tank, it’s hard to overstate how much more likely people are to be racist under these circumstances. When you put people under stress, he said, they tend to make snap judgments rooted in their basic instincts. For police officers, raised in a racist society and socialized in a violent work atmosphere, that makes racist behavior all but inevitable.

“The mission and practice of policing is not aligned with what we know about how to keep people from acting on the kinds of implicit biases and mental shortcuts,” he says. “You could design a job where that’s not how it works. We have not chosen to do that for policing.”

American police have a distinctive culture and ideology: a set of attitudes and biases that shapes the way they treat civilians. “Gun populism” is one part of that ideology. And in Kenosha, it seems to have influenced their decision-making — apparently leading them to encourage an underage gun owner to go into a dangerous situation, with predictable and tragic results.

Coronavirus, anxiety, and the profound failure of rugged individualism
Why some Asian accents swap Ls and Rs in English
Here’s how Bernie Sanders handled a pointed question about Soviet communism
How Apollo moon rocks reveal the epic history of the cosmos
What the Miami Marlins’ Covid-19 outbreak means for the MLB season, explained by an epidemiologist
The White House squashed a bipartisan Senate bill to stop election interference