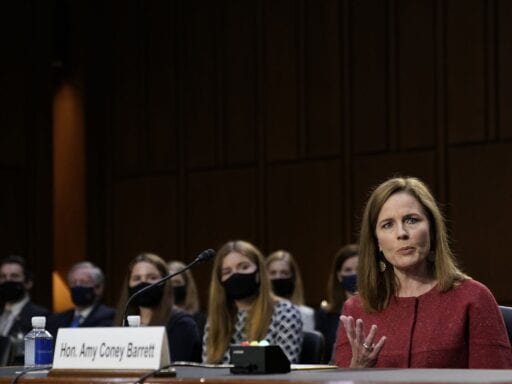 It’s a way to go after her liberal critics.

If you didn’t know that before the Senate Judiciary Committee began confirmation hearings on her Supreme Court nomination, you definitely do now, since her large family has been mentioned at least nine times as of Tuesday afternoon.

Republican Sen. Thom Tillis called her “a remarkable mother” on Monday, noting that “she has seven beautiful children.” Sen. Chuck Grassley (R-IA) called her “a tireless mother of seven.” Sen. Lindsey Graham (R-SC) even seemed to give her two extra children at one point, saying, “She and her husband have seven children. Two adopted. Nine seems to be a good number.” (Barrett and her husband have seven children, two of whom happen to be adopted. Once again, the number is seven.)

It wasn’t just Republicans. Sen. Dianne Feinstein (D-CA) also remarked on Barrett’s large family and praised her skills as a mother. But for politicians on the right, talking about the nominee’s kids has a twofold purpose. First, it’s meant to defuse criticisms of Barrett by making the case that, as a mom, she simply wouldn’t have the heart to do some of the things liberals are afraid of, like voting to overturn the Affordable Care Act. Second, it aims to paint liberal critics of the nominee as anti-child, anti-family, and anti-woman into the bargain.

“What your political opponents want to paint you as is a TV or cartoon version of a religious radical,” Sen. Joni Ernst (R-IA) said in her opening statement on Monday. “I’m struck by the irony of how demeaning to women their accusations really are, that you, a working mother of seven with a strong record of professional and academic accomplishment, couldn’t possibly respect the goals and desires of today’s women, that you, as a practicing Catholic with a detailed record of service, lack compassion. I know you to be compassionate.”

The message Ernst and others were sending was simple: By opposing the confirmation of Amy Coney Barrett, you’re opposing a mom. And what could be more anti-feminist than that?

Barrett’s children and family have been a core part of the public narrative of her confirmation since she was nominated, not quite three weeks ago. For some conservative women she’s a beacon, proof you can have a big family, a religious life, and a demanding job. Barrett “represents the fact that not all women need to think the same way about the raising of children and family planning,” Gabrielle Girgis, who is Catholic and recently finished a PhD while raising two young children, told the New York Times. Some have argued that Barrett’s success suggests women don’t need abortion, as Rebecca Onion reported at Slate. The Federalist, meanwhile, hailed the judge’s life as a rebuke to feminist orthodoxy, an example of “how strong women submit to their husbands with joy.”

In general, discourse around Barrett’s family life has assumed more knowledge about it than is publicly available (we do not know, for example, about the division of responsibilities in the Barrett home). The confirmation process has continued in that vein, with senators citing Barrett’s kids as proof of various nice things.

Grassley, for example, complained Monday that liberals were “suggesting Judge Barrett’s confirmation would be the demise of the ACA and the protection for preexisting conditions.”

“That’s outrageous,” he said, “As a mother of seven, Judge Barrett clearly understands the importance of health care.”

He seemed even more outraged on Tuesday, noting that “not only is Judge Barrett a mother of seven, she has children with preexisting medical challenges of their own.” (One of Barrett’s children has Down syndrome.)

“No one on this committee, or anyone, has any right to suggest that she doesn’t care about access to health care or protection for the vulnerable,” Grassley continued.

The goal of Grassley’s comments is clear: to make the case that Barrett, as a mother and a family member to someone with a disability, would never do something so heartless as to vote to take away health insurance for people with preexisting conditions. It’s an odd argument, as MSNBC’s Steve Benen notes — Grassley is essentially saying that “people who care about families understand the importance of health care, and those who understand the importance of health care wouldn’t dare be so callous as to destroy the nation’s existing system.”

But if that’s true, Benen asks, “Why is it, exactly, that Grassley’s party and president are enthusiastic supporters of the case that intends to tear down the ACA?” Don’t they care about families too?

Questions like this aside, it’s clear that part of the reason Grassley and others are bringing up Barrett’s kids so often is to make her seem warm and empathetic, and thus more palatable, perhaps, to centrist voters in swing states — the real audience for her confirmation hearings, since members of the committee have likely already decided how they’ll vote on her nomination.

But Republicans are also talking about Barrett’s kids as a way of arguing that it’s actually liberals who are being cruel and bigoted by opposing her nomination. Graham and others have been exceedingly careful to point out that two of those children became part of the Barrett family through adoption (they were born in Haiti). Some conservatives appear to see this fact as a kind of shield against Democratic criticism. “With two adopted children from Haiti, it’s going to be interesting to watch Democrats try to smear Amy Coney Barrett as racist,” Tea Party Patriots co-founder Jenny Beth Martin tweeted in September.

Of course, having Black children isn’t actually any kind of guarantee that someone will not uphold racist policies. As historian and author Ibram X. Kendi pointed out on Twitter, “Some White colonizers ‘adopted’ Black children. They ‘civilized’ these ‘savage’ children in the ‘superior’ ways of White people, while using them as props in their lifelong pictures of denial.”

Kendi’s point was to challenge “a belief too many White people have: if they have or adopt a child of color, then they can’t be racist.” But conservatives have used his and others’ arguments as proof that liberals are being not just mean but also downright unhinged for pushing back against the argument that Barrett can’t be racist because she has Black family members.

“I know that it hurts to be called a white colonialist,” Sen. John Kennedy (R-LA) said Monday, “and I know it must hurt for someone of deep Christian faith like yourself to be called a religious bigot, and to have it implied that because you are a devout Christian, that you’re somehow unfit for public service. Before it’s over with, they may call you Rosemary’s baby for all I know.”

Meanwhile, some are using arguments about Barrett’s kids to make a more specific point about women and motherhood. Ernst encapsulated it best during her time on Monday, during which she decried Democratic opposition to Barrett. “Instead of entering into this nomination process with an open mind and a desire to understand this woman who has been nominated for the highest court in the land, the focus is on a plan or a strategy, a series of tactics to undermine, coerce, and confuse the American people,” the senator said.

“Women all over the world are painfully familiar with this strategy,” Ernst went on. “We are all too often perceived and judged based on who someone else needs or wants us to be, not on who we actually are. I cannot speak for those that would attempt to undermine your nomination, but as a fellow woman, a fellow mom, a fellow Midwesterner, I see you for who you are, and I’m glad the American people have the opportunity to get to know Amy Coney Barrett.”

Indeed, conservatives have applauded Barrett as the apotheosis of a new form of feminism. This feminism “insists not just on the equal rights of men and women, but also on their common responsibilities, particularly in the realm of family life,” the conservative legal scholar Erika Bachiochi writes at Politico. “In this new feminism, sexual equality is found not in imitating men’s capacity to walk away from an unexpected pregnancy through abortion, but rather in asking men to meet women at a high standard of mutual responsibility, reciprocity and care.”

Once again, the American public does not actually know what standards Barrett and her husband set for one another, or how they divide up care and other labor in their home. But using similar arguments, Ernst and others are performing a sort of switcheroo on Democrats, who have questioned how a Barrett confirmation would impact abortion rights and other feminist priorities. By focusing on Barrett’s life as a mother — and a mother of many children with a demanding job, at that — Republicans are trying to turn the argument around and paint Democrats as the real sexists.

“The great freedom of being an American woman is that we can decide how to build our lives, whom to marry, what kind of person we are, and where we want to go,” Ernst said on Monday. “We don’t have to fit the narrow definition of womanhood. We create our own path.”

Barrett does seem to have created her own path. But as Onion and others have noted, she’ll likely soon have the legal authority to shape the paths of millions of other Americans of all genders, potentially deciding how we build our lives, whom we are allowed to marry, and if not what kind of people we are, then certainly where some of us are allowed to go.

Her family life tells us little or nothing about how she would decide such questions. But as many Republicans have taken pains to note, Barrett also has a high-profile career in which she has weighed in repeatedly on these important issues. And perhaps the most feminist thing to do would be to judge her by her work.

“Arrest the cops who killed Breonna Taylor”: The power and the peril of a catchphrase
The Good Place’s season 3 finale perfectly encapsulates the season’s strengths and weaknesses
Live results for the North Dakota Democratic caucuses
I had to cancel my health care to run for Congress
What’s causing climate change, in 10 charts
All the companies that have cut ties with Saudi Arabia over Khashoggi’s disappearance