Why Sam Mendes made 1917 look like it was shot in a single, continuous take 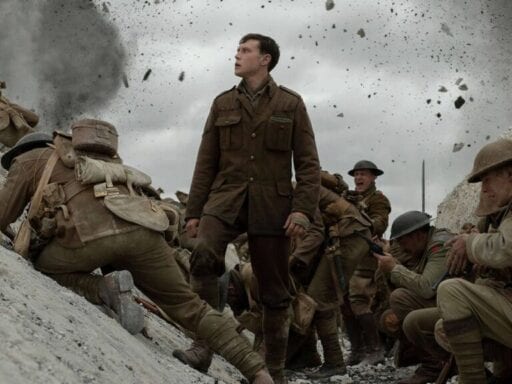 The director wanted his World War I drama to feel more like “a ticking-clock thriller” than a war movie.

The new drama 1917, which director Sam Mendes wrote based on his grandfather’s stories about World War I, was not technically filmed in a single take. If you pay attention, you can see places where the film fudges a little.

But the film does a good approximation of that technique, which makes it feel as if you’re living the events of the movie in “real time” and has been used in movies in the past, most recently in the 2014 Best Picture winner Birdman. In the case of 1917, the one-shot technique is used to tell a story about two young British privates (George MacKay and Dean-Charles Chapman) who are tasked by their general (Colin Firth) with taking a message from their trenches and across no man’s land to Colonel MacKenzie (Benedict Cumberbatch), who’s leading his men into a giant trap.

It’s a nearly impossible task, but they faithfully go for it, encountering all kinds of peril along the way with other soldiers (including Richard Madden, Mark Strong, and Andrew Scott). It’s the first film that experienced director Mendes (Skyfall, American Beauty, Road to Perdition) has also written, and I spoke with him by phone about why he decided to make the film seem as if it’s one continuous shot, as well as the challenges of casting a movie like this.

I wanted to tell this story in two hours of “real time.” So I felt like it was a natural thing, to lock the audience into the men’s experiences. In a movie that operates more like a ticking-clock thriller at times, I wanted an audience to feel every second passing and take every step with them, and also be aware of geography and distance and physical difficulty. The feeling that you are going to have to live through the story with them is accentuated by not cutting.

There are other movies that use the “one shot” idea — many people know of Birdman, or the Hitchcock movie Rope — but while watching 1917, I found myself thinking about books that follow characters through a day in “real time,” like Virginia Woolf’s Mrs. Dalloway, or James Joyce’s Ulysses. The big difference is that those books follow one character, and then they pass another character on the street, and then they start to follow that other character, more like Birdman. In 1917, you’re sticking with just one or two characters the whole time. Did that make it especially challenging for you or the actors?

It’s challenging to keep it from becoming repetitive. Even though, as you say, it’s sticking with one or two characters, ultimately the film is constantly shifting your relationship with them, and so the point of view isn’t always subjective. Sometimes you see them, but don’t see what they see. Sometimes you see what they see before they do. Sometimes it’s very intimate and very subjective; sometimes it’s very objective, and you see them quite small in a big landscape.

So, there’s a dance between the camera and the characters and the landscapes, all three of which are moving all the time. That [cinematic] language was something that [cinematographer] Roger Deakins and I really worked hard to kind of develop.

It’s a weird paradox, because on the one hand, we personally experience our lives as if we’re in a one-shot movie. On the other hand, that style and perspective are not what movies have taught us to expect.

That’s no longer the case. So there is a way of communicating now, which is not using the traditional tools, the traditional grammar of cinema that developed the last one hundred years.

[1917 is] not shot in a way that’s designed to draw attention to itself. I don’t really want people to think about the camera. If you’re aware of it for the first 10 minutes, then hopefully thereafter you forget about it, and you just watch the story.

There’s also all of these short appearances by famous actors, playing figures who in some cases would be kind of celebrities to these young soldiers — captains and commanders. How did you go about casting for those roles?

We cast who I thought were the best people for the roles, rather than thinking, Well, I need some famous actors. Of course, you’re not unaware that you’re making a fairly large movie, and you want people to come and see it. And that doesn’t hurt.

But I wanted people with that natural instant authority. Colin Firth, or Benedict Cumberbatch, or Andrew Scott — they have that skill, to be able to impose themselves upon the scene almost instantly and hit the ground running.

I was also trying to get that feeling of two relatively ordinary soldiers intersecting with these lives that are grounded in theirs, in a way, but have a higher status. Part of the reason we cast young and relatively unknown actors [as the main characters] was to give the feeling that these are two young men among 2 million, and that they’re — this is a weird thing to say — not particularly special. There’s an ordinariness to them. They’re intersecting with the lives that are writ large, in a different way from theirs.

So that was how I decided to do it. I talked to [the more famous actors] about the project as a whole, what the overall goal of the film was, instead of their individual roles. I think some of those guys are relieved to not carry the burden of the whole film for a change, to play supporting roles, and to be in something that they believe in, but they don’t have to take full responsibility for, or spend any time marketing, either.

And once you persuade one “heavyweight,” like a Colin Firth, to do it, then you could call up Benedict and say, “Colin Firth’s doing one of these characters,” and then you get both of them. It becomes easier and easier as you get further along. So it takes one person to say yes, and then you have a kind of domino effect.

How is the rehearsal process different for a movie like this from other films?

We couldn’t do anything until we had rehearsed, because we had to measure the distance that every scene took. We had to measure the journey. So we couldn’t build a trench until we’d walked the distance that the trench needed to be, and then apply the same rule to the no man’s land and the quarries, and the fields and orchards and farm houses and canals and towns at night. All of them could not be built or even conceived until we knew how long they should be. And we didn’t know how long they should be until we’d acted it. So we started the process by rehearsing in empty fields, holding scripts, and marking out the journey with flags and poles.

And only then were we able to actually move forward. So we were rehearsing for months off and on, but really what we were doing is including the actors in what would be a normal pre-production process, for six or eight months. We had them there from day one. That, frankly, is a luxury not normally afforded, because actors are busy. But I made sure that when I offered these two lads the role, they understood it was a long job, and that they had to be there as part of the team, from the very beginning of pre-production. So that’s how we did it.

You’re an experienced theater director — was there any way in which directing this film drew on those same directing muscles?

I certainly I used that same muscle. I was having to judge rhythm and pace and tempo without cutting. And that’s what one does all the time in theater. I’m not unused to telling a story that lasts two hours or two-and-a-half hours, with no breaks.

On the other hand, the landscape of the film was constantly moving — atmosphere, light, conditions — and the relationship between the camera and the actors was constantly changing in a way that it doesn’t on stage. In theater, the relationship between the viewer and the people being looked at is pretty consistent, whereas here it was changing all the time. So in another way, it was just the opposite of the theater experience, and very cinematic. This film was a weird mixture of the two.

1917 opened in limited theaters on Christmas Day. It will open nationwide on January 10.

This conversation has been edited and condensed for clarity.

Why China just got around to congratulating Biden on his 2020 win
Tulsi Gabbard calls Hillary Clinton “the queen of warmongers” in her latest clash with top Democrats
Andrew McCabe, Michael Flynn, and the latest Justice Department drama, explained
“We are desperate for any sign of hope,” Greta Thunberg tells UN climate negotiators
Russia’s growing coronavirus outbreak and its challenge to Vladimir Putin, explained
3 big health care stories to watch for in 2020