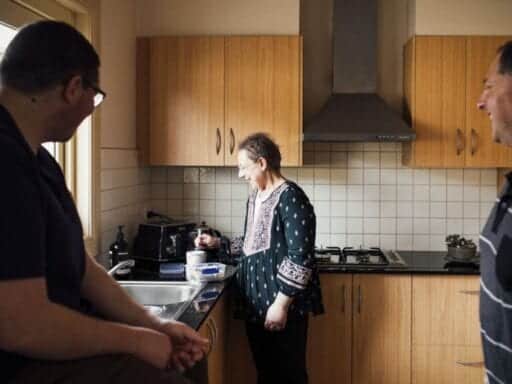 What Australian health care can teach the US about a public option.

When we first met Janet Feldman, she was wearing pink shoes, a fuzzy pink sweater, and pink glasses.

“Nothing to do with breast cancer,” she told us, “I just love the color pink.”

Janet does have breast cancer, though. She’s had it for more than 10 years. She remembers the day, more than a decade ago, when a doctor told gave her the diagnosis. She was sitting in his office with her mother.

They had to make a decision about her care: Would she go private or public?

Janet lives near Melbourne, Australia, and Australia has a health care system that looks a little bit like the public option proposed by some US presidential candidates, including former Vice President Joe Biden and former Mayor Pete Buttigieg. In Australia, anyone can get care through the country’s public system. But if they want more flexibility or access to certain doctors, they can also purchase private insurance.

Janet had paid for private insurance. Her mother assumed that would be the better option, so she asked the doctor to recommend a good private hospital.

Why would a doctor tell his patient not to use the private insurance she was paying for? And why would Australia maintain a private health care system if the public system is the one doctors tell patients to use?

Answers to these questions could tell us a lot about the future of the US health care system, especially if Biden or Buttigieg end up in the White House.

Listen to this episode of The Impact, Vox’s podcast about how policy reshapes people’s lives, for those answers:

Dylan Scott, a Vox policy reporter, went to Australia with The Impact’s Byrd Pinkerton to investigate the country’s public-private system. They met with doctors, researchers, patients — and even a robot — and returned to the US with evidence that could both hearten and concern candidates like public-private boosters Biden or Buttigieg.

A top executive at one of Australia’s biggest health insurance providers, Dwayne Crombie, agrees: Private insurance will need to be reformed if it’s going to survive. “The debate’s really about the timeframe for the death spiral,” he says.

At the same time, patients like Janet enjoy high-quality care in the public sector. The balance between public and private health care is hard to strike.

Subscribe to The Impact wherever you get your podcasts, including: Apple Podcasts | Google Podcasts | Spotify | Stitcher | Megaphone

Team Trump’s efforts to spin Mulvaney’s quid pro quo confession are not going well
Christine Blasey Ford wants an FBI investigation before she’ll testify about Kavanaugh
Trump reportedly has a new proposal to end the shutdown
The TikTok-Trump drama, explained
The effanineffable, deep and inscrutable, singular Cats
US troops aim to stay out of partisan events. Both parties used them as convention props.