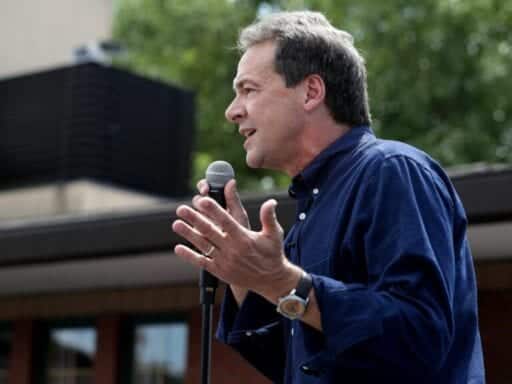 Democrats’ push for Bullock to drop his presidential run, explained.

Democrats in Washington, DC, and Montana think the state’s popular governor, Steve Bullock, is their best chance to expand their Senate map in a big way, putting another seat in a reliably red state in play for the party. The only problem? He’s not interested.

Bullock is one of a number of Democrats running for president who could be running for Senate instead. And thus far, he’s made it clear that he isn’t particularly keen on taking a swing at Congress.

There’s a reason national Democrats want him to run so badly: A well-liked governor who’s now in his second and final term, he is viewed as the candidate who could bring an otherwise noncompetitive red state within Senate Democrats’ reach. That’s why Senate Minority Leader Chuck Schumer met with Bullock way back in January, per Politico’s reporting, and why multiple senators keep encouraging him to abandon his presidential campaign.

But Bullock has repeatedly — and emphatically — said he doesn’t want the job.

Montana’s Senate seat “has never in his life, not once, been a consideration,” Bullock campaign senior adviser Matt McKenna told Vox. “There’s just no way.”

Even though a race against current Republican incumbent Steve Daines surely would be tough, Bullock arguably would have better odds of winning a race for Senate than of becoming president. He’s a highly popular statewide politician in Montana, but he’s polling at less than 1 percent in a huge field of presidential candidates, completely eclipsed by moderate frontrunner Joe Biden and overshadowed by about six others arguing that they’re the right moderate to beat Donald Trump. Another moderate Democrat, former Colorado Gov. John Hickenlooper, recently dropped out of the field after months of polling poorly, and announced his campaign for Senate on Thursday.

The push for Bullock to change races points to the high stakes surrounding the battle to control Congress in 2020: If Democrats truly want to get any of the ambitious, progressive legislation they support through Congress, they need to hang on to the House and win back the Senate majority. Were Bullock to run for Senate, it would be a major step toward potentially achieving that goal.

Right now, Democrats have a narrow path to a Senate majority that depends on several tight races: They need to hold on to a seat in deep-red Alabama (a tough prospect) and flip seats in the reach states of Colorado, Arizona, and Maine. Potentially winning one more seat — in this case, Montana — would improve their chances of securing a majority significantly.

No matter who ends up being the Democratic nominee for Senate, they’re going to have a tough time successfully beating incumbent Steve Daines for two reasons: He’s a Republican, and he’s a relatively uncontroversial senator. These factors could explain why Bullock has shied away from pursuing a campaign.

Daines was first elected to the Senate in 2014, replacing longtime Democratic Sen. Max Baucus. He’s tied himself closely to Trump; Daines recently stirred up controversy in Montana by tweeting his support for the president’s string of racist tweets against four congresswomen of color. But his alignment with the president hasn’t exactly been a problem in a state Trump won by 20 points in 2016.

“Beyond these pockets of liberal Democrats around Montana, he’s pretty solid right now,” Lee Banville, a journalism professor at the University of Montana, told Vox. “I do feel like he’s not a weak incumbent at the moment, but he’s very tied to Trump.”

Of course, Montana bucked Trump’s will in 2018 by reelecting Democratic Sen. Jon Tester. But for Democrats to beat Daines and flip the state’s other Senate seat blue, political experts in the state say they need someone pragmatic and moderate.

If there’s one word to describe Bullock as a politician, it would be “pragmatic.” He’s touted his bipartisan accomplishments with Montana’s Republican state legislature in his presidential campaign. But some of the positions he’s adopted on the campaign trail, specifically on gun control, could hurt him in a state full of hunters and farmers.

“I think the positions he’s carved out make it harder for him,” Banville said. “I think the gun one is the big one, and I think it’s big. This is not a state that’s wishy-washy on the gun issue.”

Nevertheless, national Democrats remain convinced that the governor — who has high name recognition in the state and is well-liked enough to have been elected its executive twice — could defeat the Republican incumbent. And, for now, they continue to play a waiting game with Bullock; many in the party are making it clear they would like him to run but also giving him the space to let his presidential campaign play out and ultimately make the decision for himself.

“He’d be a great Senate candidate,” Sen. Debbie Stabenow (D-MI) told Politico in May. “He’s terrific. And there’s such a huge field right now. So it’s hard to sort of understand more people getting in at this point in terms of the presidency.”

Still, speculating on a hypothetical Bullock/Daines matchup doesn’t do much good, as Bullock keeps vowing he won’t pursue a Senate seat. There are three other Democrats in the Senate primary, the most well-known of which is Helena Mayor Wilmot Collins, a Liberian refugee and veteran. Democrats in Montana focusing on those candidates who do want the Senate job point out that Tester was a little-known candidate before he became senator, but the dynamics of the race make it easier for a well-known figure to compete.

“The candidates that are out there have a tremendous climb and a lot to prove,” said Dave Parker, a political science professor at Montana State University. For that reason, many national and Montana Democrats are holding out hope that Bullock, who would have a lot less to prove, will change his mind.

Bullock is, of course, far from the only 2020 candidate who’s made it clear that he intends to pass on the Senate. Former Texas Rep. Beto O’Rourke, who ran for Senate in 2018, has unequivocally rejected the idea. Hickenlooper once cast doubt on a Senate run, but is now giving it a go.

Political experts tell Vox there are a few straightforward reasons that candidates might be loath to take on a Senate run. For Bullock and O’Rourke, the uphill challenges posed by their Senate races could explain why they’re hesitant.

“Montana and Texas are right-of-center states with scandal-free Republican incumbent senators, so it’s not like O’Rourke and Bullock would have great chances to win the lower-tier Senate races,” Kyle Kondik, a managing editor at Sabato’s Crystal Ball, told Vox.

Of course, that also raises the question of why both candidates are still pursuing the presidency when the chances of winning the Democratic nomination are likely much lower than a Senate race. Kondik chalks up candidates’ rationales for joining the 2020 race to a calculation about their images.

“For Bullock, it would be a statewide loss after a lot of statewide success, which might also effectively end his political career,” he said. “Because the odds are so bad for anyone running for president in a field this big, it may actually be easier to recover from a presidential loss.”

Add to that the fact that a presidential run could do more to increase the awareness and profile of a candidate, compared to a Senate race. Bullock could ultimately leverage this attention for other political gain, including a potential Cabinet position, Frontloading HQ’s Josh Putnam posits.

“In general, running for president has become a ‘career maker’ for many politicians who might otherwise never gain national traction, and it has become more lucrative for some (see Bernie Sanders) in terms of book and speaking fees, among other things,” Brown University political science professor Wendy J. Schiller-Kalunian told Vox.

There’s also another factor Bullock may be considering: time. While Bullock has insisted he does not want to pursue a Senate seat at the moment, the deadline for filing for the Montana Senate election isn’t until March 9, 2020. And though he’s said he won’t be taking this route, he still has several months before he truly needs to make a final decision.

“I wouldn’t be surprised if he eventually does get into the Senate race,” Cook Political Report’s Jennifer Duffy told Vox. “Bullock could wait until the first quarter of next year.”

For a chance at expanding their numbers in the Senate, Democrats are hoping he reconsiders before then.

Walmart is doing more to stop gun violence than Congress is
As Australia burns, its leaders are clinging to coal
Trump eliminates federal anti-racism training, calling it “a sickness”
“I don’t want to be a depressing drumbeat”: TV comedy legend Greg Daniels on his daring new shows
Bernie Sanders looks electable in surveys — but it could be a mirage
Russia reportedly offered the Taliban bounties for American soldiers. Trump denies knowing about it.