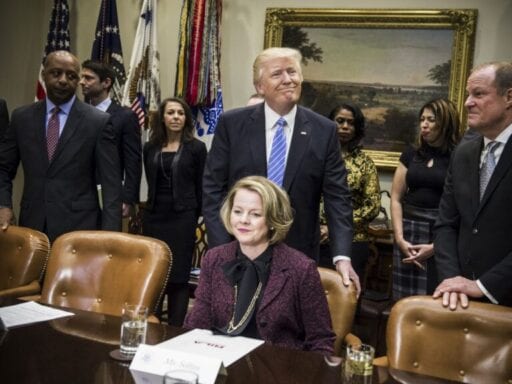 When women reach the upper ranks of power, they’re put into precarious positions, meaning there’s a greater risk for them to fall.

J.C. Penney has had a rough few years. The retailer has posted losses quarter after quarter, closed dozens of stores, and struggled to find its footing in a changing consumer landscape.

This month, the company announced it was bringing on its first woman CEO — Jill Soltau, the former president and CEO of Joann, the fabric and craft store chain.

The new job is an opportunity for Soltau, a 30-year veteran of the industry who will join the ranks of just a small group of women to serve as chief executives of Fortune 500 companies. But she’s coming into a challenging industry with no guarantee of success. A struggling company bringing on a woman to help right the ship is a common play — a phenomenon known as the “glass cliff.”

The glass cliff is a relative of the “glass ceiling” — a metaphor for the invisible, societal barrier that keeps women from achieving the highest positions in business, politics, and organizations. The glass cliff is a twist on that: Women are elevated to positions of power when things are going poorly. When they reach the upper ranks of power, they’re put into precarious positions and therefore have a higher likelihood of failure, meaning there’s a greater risk for them to fall.

And it’s not just a phenomenon reserved for women; it happens with minority groups, too.

“When an organization is in crisis, women are often seen as being able to come in and take care of a problem,” Anna Beninger, senior director of research and corporate engagement partner at Catalyst, a nonprofit focused on promoting women in business. “They’re effectively handed the mess to clean up.”

Sometimes these situations work out, and the women put in charge are successful in orchestrating a turnaround and righting the ship. Often, however, they don’t.

The glass cliff phenomenon and the research behind it, explained

The term “glass cliff” was first coined by University of Exeter researchers Michelle Ryan and Alexander Haslam in 2005. In 2003, the United Kingdom newspaper the Times had suggested that women leaders have a negative impact on company performance. Ryan and Haslam looked at the 100 companies listed on the London Stock Exchange that make up the FTSE 100 index to see what happened at those firms before and after men and women board members were brought onboard.

Their findings: During periods of overall stock market decline, firms that brought women to their boards were likelier to have experienced a consistently bad performance in the preceding five months than those who brought on men.

“The glass cliff is a phenomenon whereby women (and other minority groups) are more likely to occupy positions of leadership that are risky and precarious,” Ryan, one of the researchers behind the study, told me in an email. “This can happen when share price performance is poor, when facing a scandal, or when the role involves reputational risk.”

Researchers Alison Cook and Christy Glass at Utah State University followed up with research examining Fortune 500 companies over a 15-year period. They reported similar findings: White women and men and women of color are likelier than white men to be promoted to CEO of weakly performing firms.

I asked Cook in a phone interview about why the glass cliff exists — why do companies bring in women and minorities specifically when things are going badly?

“When firms are doing poorly, the really qualified white male candidates say, ‘I don’t want to step into this,’” she said. “Women and minorities might feel like this might be their only shot, so they need to go ahead and take it.”

There is also a perception that women possess certain stereotypical qualities that make them better able to maneuver through tough times. They’re often seen as more democratic, cooperative, and loyal than men.

A study published by the Harvard Business Review asked college students to identify whether a man or woman should be chosen to head a theoretical organic food company after a CEO retired. They found that when the company had been led by a man and was doing well, 62 percent of students chose a candidate who was a man. When the man-led company was in crisis, 69 percent said a woman candidate would be better.

Anne Mulcahy, who served as CEO of Xerox from 2001 to 2009, was promoted at a time when the company was on the edge of bankruptcy and successfully engineered its turnaround. Cook said that the gender-stereotypical qualities she possessed are part of what helped elevate her at Xerox, and what helped her succeed. “She bled for Xerox, and everybody knew it,” she said.

Beyond the reasons boards of directors or other decision-makers within organizations decide to elevate women in times of crisis, there is also the question of the women themselves and the personality traits some of them possess that cause them to step in while others might stand down.

Cook and Glass in separate research interviewed top executives at Fortune 500 companies and looked at their career trajectories over time. What they found was that women who reached the C-suite took risky positions throughout their careers in order to be more visible and prove their leadership capabilities. Some characterized themselves as “turnaround artists.”

“Women feel a great sense of purpose and a great level of commitment to the communities they’re involved in perhaps in a different way than they think about their own career trajectory,” Jane Stevenson, who heads CEO succession at search and consulting firm Korn Ferry, told me. “Women are much more willing to take on a low-success probability situation because they felt maybe they were uniquely equipped to make a difference.”

“There’s a certain profile of person who is less concerned with what a challenge might mean for them personally if they were to fail,” Evelyn Orr, vice president and COO of Korn Ferry Institute, the firm’s research arm.

Korn Ferry put together a report last year on women CEOs based on interviews and analyses of 57 top executives. They found that women CEOs excelled in managing complexity and being perceived as inspirational.

“If you have a company that’s in trouble, believe me, it’s something that you need very badly as the attributes of the CEO, especially if the CEO is internal,” Jewelle Bickford, a partner at Evercore Wealth Management who helps lead Paradigm for Parity, a group dedicated to improving women’s leadership in corporations.

When women do end up in a position to be at the glass cliff, it takes them longer to get there: Korn Ferry’s research found that it took a third longer for boards to choose a woman CEO than it did a man, and women CEOs are on average four years older than their men counterparts when they get their first assignments.

And risks that women leaders take aren’t always met with reward, at least not professionally. A 2013 PwC report found that over a 10-year period, more women leaders were forced out of office than men — 38 percent of women CEOs versus 27 percent of men CEOs. In other words, women walk into bad situations and then they’re given a shorter leash to fail.

The New York Times in 2015 found that of the 23 women leading S&P 500 companies at that time, at least a quarter had faced fights with activist investors.

And if women CEOs fail, they’re not given future opportunities at the same rate men are.

“They get these opportunities, and they’re amazingly talented and extraordinary women, and if something goes wrong, I’m not seeing them get pulled back into another company,” Cook, the Utah State researcher, said.

There are plenty of examples, past and present, of glass cliff scenarios.

Some have been successful: Barra was brought in at GM amid a scandal over a faulty ignition switch in its vehicles blamed for dozens of deaths and has remained at the helm of the company. Mulcahy successfully orchestrated Xerox’s turnaround and handed the reins of the firm to Ursula Burns, the first black woman to lead Xerox who served from 2009 to 2016.

“If there is a bright spot, the bright spot is that the glass cliff phenomenon does not seem to apply to organizations when they have a history of female leaders,” Beninger, from Catalyst, said.

Others have fallen off the cliff; Jill Abramson was fired in 2014 as the first woman executive editor of the New York Times, Marissa Mayer, after years of heavy scrutiny, is out at Yahoo, now Oath. There’s Ellen Pao at Reddit, Sheri McCoy at Avon, and Carly Fiorina at HP.

Carol Bartz ran software company Autodesk for 14 years starting in 1992 and in 2009 became CEO of Yahoo, when the once-internet giant was starting to see troubles. She was pushed out after just two and a half years in 2011.

“Listen, it is absolutely true that women have a better chance to get a directorship, or a senior position if there’s trouble,” Bartz said in an interview with Freakonomics earlier this year.

She said it’s “good” that women take the chance, as she did, but also acknowledged what often happens next. “It’s not that all of a sudden the boards wake up and say, ‘Oh, there should be a female here.’ They do that sometimes, because it’s easier to hide behind, ‘Well, of course. Of course that failed, because it was female. What could we have been thinking?’”

There’s also a “savior effect” that sometimes happens after a woman is brought on and pushed out as a CEO — she’s replaced by a man, a mark of a return to the status quo. After Bartz, Yahoo tapped Scott Thompson, a white man, as its next chief executive.

With some women, it’s still not clear how their glass cliff scenario will turn out. Take UK Prime Minister Theresa May in Brexit. “Whatever one’s feelings on Brexit, the situation is a difficult one to navigate, and her leadership popularity is suffering as a result,” Ryan, one of the original Exeter researchers, said.

And then there’s the new J.C. Penney CEO, Soltau, who most recently served as CEO of JOANN and has also worked for Shopko, Sears, and Kohls. A J.C. Penney spokesperson said the company’s board believes Soltau is the “ideal candidate” who will be instrumental in “driving long-term growth.”

When her appointment was announced, Neil Saunders, a managing director of retail data firm GlobalData Retail, wrote in a note to clients that putting an experienced woman executive in charge was a “sensible move.” He told me in a phone call that it’s “very difficult for a man to get inside the mindset of how women shop” at stores such as J.C. Penney and expressed hope that J.C. Penney, under Soltau’s watch, could be turned around.

Soltau will replace Marvin Ellison, who took over as J.C. Penney CEO for Ron Johnson, who came on as chief executive in 2015. Ellison, a black man, took the reins after Ron Johnson and Mike Ullman, both white men, failed to turn the retailer around. He’s leaving J.C. Penney for Lowe’s.

I asked Saunders, given the company’s problems, who else he thinks was up for the CEO job or would have taken it besides Soltau.

“I think it is a very difficult job,” he said. “And it would have put a lot of people off.”

In other words: She is climbing the glass cliff.

Vox Sentences: The end of the road for Theresa May
Trump’s plan to take wolves off the endangered species list is deeply flawed
23andMe laid off 100 employees due to slowing DNA kit sales
Did Biden’s South Carolina win come just in time for Super Tuesday — or too late?
This year’s Super Bowl ads are dominated by nostalgia
Why support for Medicare-for-all didn’t translate into a bigger Super Tuesday for Bernie Sanders