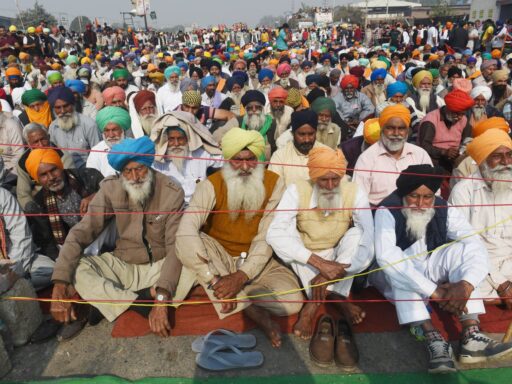 India says its new laws will modernize agriculture. Farmers say it will cause their ruin.

More than 200,000 Indian farmers and their supporters have occupied the streets of New Delhi for days in protest against three new agriculture reform laws, blocking major highways into the capital city and vowing to remain camped there until the laws are repealed.

A watershed moment in the history of Indian agriculture! Congratulations to our hardworking farmers on the passage of key bills in Parliament, which will ensure a complete transformation of the agriculture sector as well as empower crores of farmers.

But the protesting farmers aren’t convinced.

Although the government has said it will not drop minimum support prices for essential crops like grain, which the Indian government has set and guaranteed for decades, the farmers are concerned they will disappear. Without them, the farmers believe they will be at the mercy of large corporations that will pay extremely low prices for essential crops, plunging them into debt and financial ruin.

“Farmers have so much passion because they know that these three laws are like death warrants for them,” Abhimanyu Kohar, coordinator of the National Farmer’s Alliance, a federation of more than 180 nonpolitical farm organizations across India, told me in an interview. “Our farmers are doing this movement for our future, for our very survival.”

The distressed state of farmers in India is cause for concern. A 2018 study by India’s National Bank for Agriculture and Rural Development found that more than half of farmers in India are in debt. More than 20,000 farmers in the country died by suicide from 2018 to 2019, and though there is considerable debate, several studies suggest that farmers’ indebtedness has been a major factor.

In comments made November 30 from the banks of India’s sacred Ganges River, Modi sought to reassure farmers that the new laws would benefit them. “These reforms have not only served to unshackle our farmers but also have given them new rights and opportunities,” Modi said.

Modi has blamed India’s opposition parties, which have been speaking out strongly against the bills, for agitating the farmers by spreading rumors.

“I know that decades of falsehood do put apprehensions in the minds of farmers, I want to say this from the bank of Mother Ganga — we are not working with the intention of deceiving. Our intentions are as holy as the water of the river Ganga,” Modi said.

The farmers, who are mostly from the nearby Punjab and Haryana regions, began marching to New Delhi by the thousands in tractors and cars on November 26 to demand the prime minister repeal the laws. They were met by large numbers of police in riot gear, who used tear gas, water canons, and batons to keep the protesters at the border of New Delhi and Haryana state.

Protests restarted November 27, but following the clashes, authorities allowed the farmers to enter New Delhi and peacefully assemble at an approved location later that evening.

Some of the iconic pictures from the organic and massive protests led by Farmers in India today. Even though the central government tried everything to scare them off, the Farmers bravely faced it to register their opposition to the pro-corporate, Farm Bills. pic.twitter.com/04z6jG8e0n

A delegation of farmers held talks on December 1 with BJP officials, including Minister of Agriculture Narendra Singh Tomar, but the negotiations were unsuccessful.

“The government did not agree to our points and rejected our demands outright,” Chanda Singh, a member of the farmers’ delegation, told Al Jazeera, referring to the farmers’ insistence that the three laws be repealed. “We will continue our protest unless our demands are met,” Singh emphasized.

Tomar, however, appeared to have a more favorable view of the talks, telling Indian news agency ANI that the meeting went well. Another round of talks with a greater number of farmers is scheduled for December 3.

Whether those talks will appease the concerns of the farmers, though, remains to be seen.

Some experts say the laws are “a necessary tough call,” but farmers aren’t convinced

Agriculture plays a crucial role in the Indian economy, as roughly 60 percent of India’s 1.3 billion people depend on farming for their livelihoods. But farming is also incredibly unproductive, as the sector accounts for only about 15 percent of India’s GDP.

By allowing farmers to sell to whomever they want, the government hopes to attract private business to agriculture, which will benefit some farmers.

“It’s a necessary tough call,” said Sadanand Dhume, a resident fellow at the American Enterprise Institute and an expert on South Asia. “This should’ve been done 20 years ago. It’s a small part of a much larger and much more complex solution to a problem.”

The problem, Dhume explained, is that there are simply too many farmers in India. He and others have argued that the country should make a similar transition away from farming to manufacturing like China did.

But so far, India has not been able to generate the kind of manufacturing growth needed to support millions of farmers in their transition to new work. Manufacturing only accounted for about 17 percent of India’s GDP in 2020.

As Dhume stressed, “If the economy were creating jobs, then there wouldn’t be as much anxiety. In India, because job creation has been so weak, the thought of losing the guarantee is unsettling for farmers.”

Part of the farmers’ fear is also due to the urgency of the current moment, where the economic impact of the Covid-19 pandemic has made farmers even more alarmed. The Indian economy shrank 7.5 percent from July-September compared to the same period in 2019. A June survey by All India Manufacturers Organization found that more than a third of medium and small business were making plans to close despite receiving aid from the government.

The farmers have brought enough supplies with them to last for at least six months and are determined to stay until Modi’s government repeals the new farm bills and enshrines the minimum support price into law, among other demands.

“We want everything in writing,” Kohar said.

It sure looks like Trump’s national security adviser is campaigning for him in swing states
Two of the year’s best movies are coming to Netflix
Elizabeth Warren is now leading the 2020 polls
A controversial Florida law stops some former felons from voting. A judge just blocked part of it.
The fatal arrest of Manuel Ellis, another black man who yelled “I can’t breathe,” explained
Social distancing won’t just save lives. It might be better for the economy in the long run.