Why the coronavirus cancelled the NBA 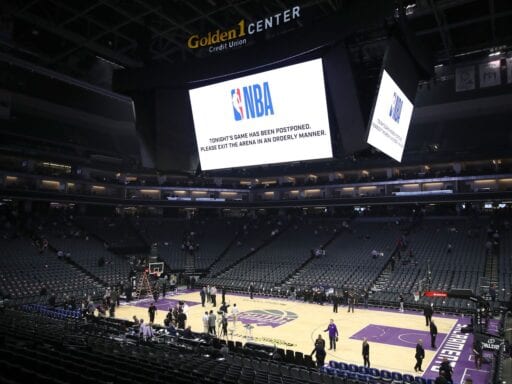 Share
Loading...
The Golden 1 Center in Sacramento, California, after the NBA cancelled all of its games after a player tested positive for Covid 19, the disease spread by the coronavirus. | Photo by Ezra Shaw/Getty Images

All of which underscores just how quickly American reactions to the coronavirus are morphing. Things that seemed far-fetched or alarmist a few days, or even a few hours ago, are becoming realities.

And while the way the big time sports leagues handle the pandemic may ultimately be a footnote to the way this story pans out, I can also see it helping to snap Americans’ focus to attention.

It’s one thing to debate among your friends, or strangers online, how worried we ought to be about the threat. It may be another thing to turn on the TV and see athletes playing in an empty arena, or games suspended or cancelled entirely.

When I talked to Windhorst on Wednesday for this week’s episode of Recode Media, we discussed the notion that the NBA — which was already being compelled to ban fans from games in cities like San Francisco — might have to suspend its games altogether.

“I think it’s more likely that the NBA suspends,” Windhorst told me. “Specifically for the playoff games. I could see them keeping their head above water, taking some losses on regular season games for a while. But I think eventually if if this goes on, they will suspend and and try to get all their playoff games in later on.”

But now, in retrospect, it’s easy to see why the league would shut down once a single player tested positive for Covid-19. On Wednesday evening, players for the both the Jazz and the Thunder were reportedly being quarantined at the Oklahoma City arena, and Windhorst reports that players for five teams that played the Jazz in the last 10 days are being asked to self-quarantine.

That is: Seven of the NBA’s 30 teams can’t play right now, regardless of whether fans are watching them. The virus forced the NBA’s hand. And we’ll be very lucky if that’s the most stunning turn of events in the next few months, weeks, or days.

A Supreme Court showdown over birth control got much messier Wednesday
How I’m using AI to write my next novel
E-girls and e-boys, explained
The Chris Murphy Doctrine
The history of Jews, Chinese food, and Christmas, explained by a rabbi
Trump renews Space Force plan, but Congress lukewarm on plan it would have to approve