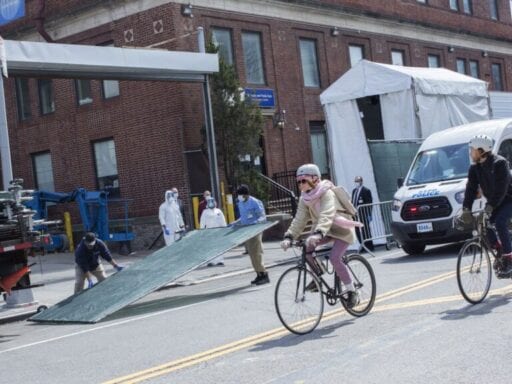 There are likely many uncounted Covid-19 fatalities. People are also dying from the economic and health system crises.

It’s long been the consensus of experts that more Americans are dying in the coronavirus pandemic than the official figures indicate. But exactly how many?

This week, the first estimate of how many more people have perished was published in the Washington Post, using one of the best methods commonly used by researchers: measuring excess deaths.

And it was a grim one. The Post, in partnership with researchers from the Yale School of Public Health, estimated that 15,400 more people died between March 1 and April 4 than would ordinarily have been expected, a substantially higher toll than the 8,128 coronavirus deaths that were reported over that time by government agencies. Ordinarily, the researchers project the US would have had a little more than 50,000 deaths in the studied period, but the actual deaths were more than 60,000.

Not all of those excess deaths were necessarily directly a result of Covid-19. As the Post reporters wrote, mortality in a pandemic is a complicated recipe:

The excess deaths are not necessarily attributable directly to covid-19, the disease caused by the coronavirus. They could include people who died because of the epidemic but not from the disease, such as those who were afraid to seek medical treatment for unrelated illnesses, as well as some number of deaths that are part of the ordinary variation in the death rate. The count is also affected by increases or decreases in other categories of deaths, such as suicides, homicides and motor vehicle accidents.

But in any pandemic, higher-than-normal mortality is a starting point for scientists seeking to understand the full impact of the disease.

“Determining the cause of death is more of an art than a science, and guidelines can change,” Daniel Weinberger, who led the Yale School of Public Health researchers, told me. “There are likely many more people who died of coronavirus-related causes than who have ‘coronavirus’ listed as a cause of death on the death certificate.”

Then again, you also have to account for how many of the people who died from Covid-19 might have died anyway, given poor health, as well as the lives saved because, for example, fewer people are driving automobiles during a period of nationwide lockdowns.

“One way to avoid these biases is to look at what happens to rates of death due to any cause,” Weinberger said. His team created a regression model that adjusts for the seasonal variations in mortality and changes in mortality over time. They accounted for flu activity as well.

The bottom line, according to Weinberger: “With all those complexities, we still see that there were about 15,000 excess deaths from March 1 to April 4. This is about 1.5 to 2 times higher than the reported number of Covid-19 deaths at the time.”

And if anything, that is probably the floor. Experts including Weinberger agree the death counts are likely to be revised upward as more reporting come in. Tallying deaths always takes time because of inconsistent reporting across states.

“As we gain more detailed information on the causes of death, we will learn more about whether Covid-19 caused them directly, or whether the many disruptions, both to health care, and economic disruption, could have caused many of the excess deaths,” Ellen Meara, a health economics professor at Harvard, told me over email. “What is remarkable to me about the sheer number of excess deaths is that this spike in deaths has occurred despite some trends that we expect to lower deaths during Covid-19.”

More than 58,000 Americans are confirmed to have died from the coronavirus as of midday on April 29. As the Yale study suggests, that number is likely low.

In some respects, it is no mystery why more people have died during the coronavirus pandemic than the government figures indicate. The officially reported number of Covid-19 deaths generally comes from hospitals. People who die at home may not be counted if they are never tested for the coronavirus. Instead, they may have a pulmonary embolism or heart attack listed as their cause of death, even if Covid-19 was the catalyst for their passing.

“People who die at home are least likely to be counted, particularly since we are seeing some people dying of pulmonary embolism or other clotting,” Natalie Dean, a biostatistics professor at the University of Florida, said.

New York City has already revised its death count upward to account for nearly 4,000 people assumed to have died of Covid-19 but who were never tested for it. The city is now up to 17,700 reported deaths, as of April 29. Future official revisions may be made, but this is one advantage of the approach taken by Weinberger and company: it simply counts how many people are dying overall, of any cause, and compares it to a hypothetical reality with no Covid-19.

Undercounting coronavirus deaths isn’t only an American problem. The Financial Times analyzed data from 14 countries and found 122,000 excess deaths above what would be expected. Spain has seen 27,600 more deaths than usual in March and April; Italy is up to 21,500, and France 16,500. A separate FT analysis of England and Wales estimated that Covid-19 is killing twice as many people as the government has attributed to the crisis.

And these numbers are really a baseline. “Revisions AAAAALLLLLWAAAAAAAYS go up,” Lyman Stone, an economist and adjunct fellow with the American Enterprise Institute who has studied mortality rates, told me over email.

Using a methodology to account for expected revisions, he is preliminarily projecting that excess deaths could exceed 60,000 or more in March and April.

hey since we’re doin’ it

here’s a better estimate than what’s shown there pic.twitter.com/nCo6NW7F1v

You get the point. The coronavirus’s toll is likely worse than we know right now. The big question is why.

In all likelihood, some of the 15,400 excess deaths measured in the Yale study were not the direct result of Covid-19. So why else are so many more people dying in a pandemic?

One of the most obvious candidates is the strain on the American health system from coronavirus, which is leading people to die from causes they might otherwise not have — think of a mild heart attack or a complication if somebody with a chronic condition runs short on medicine and can’t see their doctor to get a prescription filled. This was a fear from the start, as medical facilities revamped their operations to focus on Covid-19, and emergency responders were inundated with a record number of calls.

“It‘s possible that emergency response teams, hospitals, and nursing home facilities overburdened with coronavirus have been unable to effectively prevent deaths from other causes they would ordinarily have been able to,” Jessica Ho, a USC sociologist who studies mortality, said.

The interruptions to routine care for people with chronic conditions could also be to blame, with primary care practices postponing many outpatient services and furloughing staff. As I wrote recently on the dramatic downturn in primary care visits during the outbreak:

“Within my lifetime, I have not seen anything of this magnitude,” Ateev Mehrotra, a professor at Harvard Medical School who led the study, told me.

He also said that “our real concern is those patients who might have deferred a visit and they’re going to have a flare-up of their chronic illness.” In a worst-case scenario, that could lead to patients dying at home — a person with heart failure, for example — who might not have if they’d been able to see their regular doctor. This will add to the death toll of Covid-19, but it will be hard to fully measure.

Dania Palanker, an assistant research professor for the Center on Health Insurance Reforms at Georgetown’s Health Policy Institute and a chronic care patient herself, worried about people recently diagnosed with diabetes or heart disease who won’t be able to get that critical first appointment with a new doctor. “You can’t delay those appointments for a few months.”

The mental health toll of the current economic crisis caused by the coronavirus and accompanying lockdowns could also be driving up deaths, several experts told me. (There are indications domestic violence is increasing during the pandemic, though it’s not clear if that is translating to a rise in deaths.)

“We know that reported levels of anxiety and depression are rising, and claims for unemployment insurance are at historic highs,” Meara said. “All of these could contribute to increased death from suicide, as prior economic downturns suggest.”

On the other hand, other causes of deaths might be down because of the pandemic and stay-at-home orders. Car accidents are one obvious candidate. Pollution is down, and that could be a boon for health. Some people with physically demanding jobs are working less, which could also be resulting in fewer deaths than would otherwise occur.

Throw all these ingredients together — uncounted Covid-19 deaths, other preventable deaths from a health system overload, the health toll of record unemployment, and then saved lives because people are driving less and other behavioral changes — and you get a fuller picture of the coronavirus’s toll. The Yale researchers provided a preliminary figure; Stone’s personal estimates anticipate excess deaths will continue to mount.

This data is a reminder that a pandemic can take a toll beyond the damage caused by the pathogen itself. But first and foremost, when excess deaths are twice as high as the official coronavirus death toll, it’s a clear indication that we are not doing a good job of counting all the deaths that are the direct result of this virus.

As Josh Michaud, associate director for global health policy at the Kaiser Family Foundation, told me: “In all likelihood, many of these excess deaths can likely be attributed to Covid.”

Georgia’s Republican secretary of state says he will certify Biden’s win today
Amazon has started removing QAnon merchandise. Employees want right-wing militia merchandise taken d...
Astronomers are very frustrated with Elon Musk’s satellites
Trump’s latest tweet about coronavirus testing is like a greatest hits of his favorite lies
What happens to Mueller’s investigation if Jeff Sessions is fired or quits?
4 winners and one loser from primary elections in Florida, Arizona, and Oklahoma