Why the Soviets doctored this iconic photo 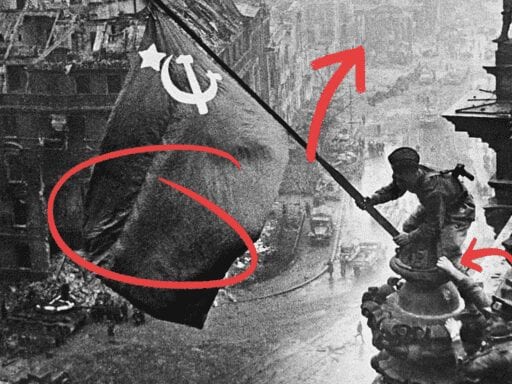 This photo conceals a clue to a brutal story of vengeance.

“Raising the Flag on Iwo Jima” and “Raising a Flag over the Reichstag” are similarly iconic photos from World War II. They’re both beloved images of victory, and they were both taken after significant battles.

But the Soviet one is different; parts of it are altered. Photographer Yevgeny Khaldei superimposed dark smoke from another photo and manipulated the contrast to give the scene more drama. The comparison below shows the original and the altered version of the photo.

There’s something darker here. Specifically, a second watch worn by one of the soldiers is edited out to cover up the possibility that he had been looting. The comparison below shows a close-up of the original and the altered version, where the watch is gone.

The Soviet invasion of Germany included brutal acts of civilian murder, rape, and looting, seen as vengeance following Adolf Hitler’s invasion of the Soviet Union that left millions dead, including women and children.

Watch the video above to see how the missing watch ties in, and subscribe to Vox’s YouTube channel for more videos.