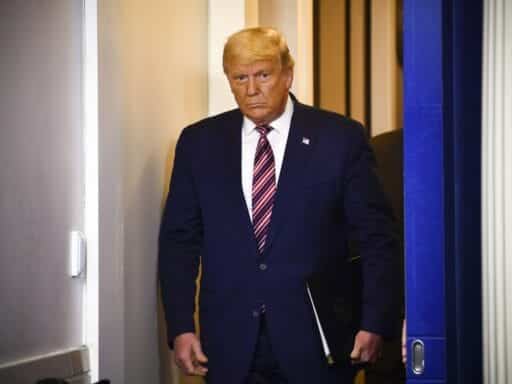 Share
Loading...
President Trump arrives to speak to reporters at the White House on November 5. | Brendan Smialowski/AFP via Getty Images

Trump’s lawyers haven’t come up with anything that could plausibly flip the election.

President Trump gave a brief, alarming speech in the White House Press Room Thursday evening, where he claimed — without any evidence — that the election is being “stolen” from him. He also suggested that he may have an ace in the hole.

“We think there’s going to be a lot of litigation because we have so much evidence, so much proof, and it’s going to end up perhaps at the highest court in the land,” Trump said.

It’s not the first time Trump has suggested that the Supreme Court, which currently has a 6-3 Republican majority, will throw the election to him. Shortly after Justice Ruth Bader Ginsburg’s death opened up a vacancy on the Court, Trump said he thought the election “will end up in the Supreme Court, and I think it’s very important that we have nine Justices.” There now are nine justices, because Trump appointed Justice Amy Coney Barrett to replace Ginsburg.

Even 20 years later, the memory of Bush v. Gore (2000), a Supreme Court decision that effectively handed the 2000 election to George W. Bush, is still raw. Bush relied on the kinds of arguments that the five conservatives in the majority ordinarily viewed with skepticism. It was widely viewed at the time, and is widely viewed now, as a political decision and not an exercise in legal reasoning.

But even though Bush looms over every American election, it is still very unlikely that the Supreme Court would steal this election for Donald Trump. There are crucial factual differences between the current election and the facts underlying Bush. And while Trump’s legal team is filing plenty of lawsuits, they don’t appear to have come up with anything that could change the result of this (still undecided) presidential election.

There is still time. And there is still a Republican majority on the Supreme Court. No one should rest assured that in the event Trump loses, he couldn’t find some way to cling to power until he is evicted from the White House.

But it is still very unlikely that the Court would steal this election for him.

The Trump campaign has filed a wave of lawsuits seeking to make marginal changes to the procedures governing ballot counting. But nearly all of these suits involve such minor disputes that it’s unclear what Trump stands to gain even if he prevails in court.

A Pennsylvania lawsuit, for example, sought a court order allowing the Trump campaign’s poll watchers to stand closer to election workers who were sorting and counting ballots. A Georgia lawsuit turned on a Trump poll watcher’s claim that he left a room where ballots were being sorted, and when he came back, a stack of ballots was no longer where it was when he left. A Michigan lawsuit sought the right to watch video of “the ballot boxes into which [certain] ballots are placed.”

No one should rest assured that in the event Trump loses, he couldn’t find some way to cling to power until he is evicted from the White House

Perhaps there’s a grand legal strategy here. But the election is unlikely to turn on whether Trump’s poll watchers can stand in a particular location. Or whether they can watch a particular video.

There is one lawsuit that could potentially be important. In mid-September, the Pennsylvania Supreme Court ruled that ballots that are mailed before Election Day, but that arrive up to three days after Election Day, should be counted. In Republican Party of Pennsylvania v. Boockvar, the GOP asked the US Supreme Court to reverse the state supreme court’s decision, which would mean that these late-arriving ballots must be tossed out.

If the presidential election hinges on Pennsylvania and if the outcome of Pennsylvania’s presidential race turns on whether those late-arriving ballots are counted, then Republican Party could potentially throw the election to Trump.

But that outcome seems very unlikely. Democratic nominee Joe Biden is currently favored to win Arizona (although his lead there is very small) and Nevada. He’s also on the cusp of pulling ahead in Georgia, with enough ballots from Democratic areas of the state remaining uncounted that Biden is probably also favored to win Georgia. If these three states go Biden’s way, it won’t matter what Pennsylvania does.

Meanwhile, there are numerous signs that Biden is likely to win Pennsylvania — potentially by a comfortable margin — with or without the late-arriving ballots. And if that’s the case, a victory for the GOP in Republican Party won’t be enough to flip that state to Trump.

This election is very unlike the one that gave us Bush v. Gore

It’s also important to bear in mind that the 2000 election between Bush and former Vice President Al Gore was quite unlike the current one. That election was exceedingly close. With all other states counted, the winner of the race hinged on who won Florida, and the initial tallies in Florida showed Bush up by just 1,784 votes.

This year, by contrast, Biden could be on track to win enough states that he will receive 306 electoral votes. If that’s the case, there is no one contested state that could be flipped to hand the election to Trump. Indeed, even if Trump won Pennsylvania and Georgia, the two biggest prizes that could plausibly swing in Trump’s direction, Biden would still win 270 electoral votes and the presidency if he holds on in Arizona and Nevada.

Maybe the Supreme Court is willing to sign on to a legal argument that gives Trump one state that Biden rightfully should have won. Perhaps they could even steal two states for Trump. But three?

And it’s important to remember that Bush was ahead in Florida when his case reached the Supreme Court. That meant the justices didn’t have to take any affirmative action that would have tossed out Gore’s already-counted votes or handed additional votes to Bush. Bush would prevail if he merely maintained the status quo.