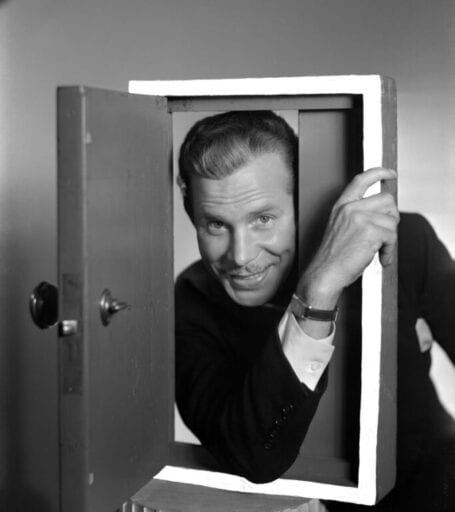 They all start the same way: a few minor chords from a pipe organ, maybe a quick plug for Bromo-Seltzer or some other apothecary’s helper no longer in circulation — and then the creak.

It is the creakiest creak to have ever creaked, so drawn-out and borderline polyphonic that it could be mapped on a musical staff. Doors, even those leading to dank candlelit basements in which creepy bards wait with tales of the macabre, do not make this much noise in real life. (And that’s true; the creaking sound effect was achieved with a rusty swiveling chair. Pity the poor self-starting staffer who once oiled the makeshift instrument under the impression that he was helping out.)

But that’s just the order of the day on The Inner Sanctum Mystery, where there’s always a chill in the air, black cats yowl at the full moon, and no hinge keeps quiet.

Spun out from Simon & Schuster’s series of cheap paperbacks and then spun out once more into a six-picture series of feature films in the ’40s, the title gained the most prominence as a radio serial running 526 episodes from 1941 to 1952. Creator Himan Brown struck the same chord with audiences that Rod Serling would continue to clang all throughout the 1960s on The Twilight Zone, attaining impressive longevity through an infinitely renewable formula and the public’s unslakable thirst for fear.

Brown cohesively bound the many installments of this radio anthology by sticking with a consistent structure and tone befitting the morbid subject matter. A vampy host brought over from the Broadway stage (Raymond Edward Johnson, at first, then Paul McGrath from 1945 onward following Johnson’s enlistment in the war effort) would ham it up as he introduced the night’s diversion with florid language that would make Edgar Allan Poe proud.

Then followed an account of danger and suspense, playing up atmosphere and tension over gutbucket descriptions of gore, erring on the side of “spooky” rather than “horrifying.” These punctuated by occasional appearances from the schoolmarmish Lipton Lady, come to shill for sponsored tea and tut-tut the twisted little deviants who tuned in.

The narrator’s raconteurish presence set the scene as an act of yarn-spinning, a framing device harkening back to the scary-story form’s beginnings in the oral tradition. By creating this familiar cast of characters and an accompanying sense of communal gather-round-children experience, the Sanctum established itself as a place anyone could go to get scared out of their wits in the comfort of their own home.

While some episodes dove into the supernatural (to wit: “The Horla,” in which Paul Lukas contends with an invisible demon borrowed from an old French novella), they more frequently landed in an earthbound, Hitchcockian register. With all the gravitas that the sonorous cast could muster, they emphasized a human element among the violence, illustrating the ease with which jealousy, arrogance, or anger can drive a person to homicidal extremes.

All that each half-hour segment needed was a sturdy hook on which it could hang puns, pulpy pleasures, and purple prose; hubristic would-be masterminds plotting their perfect crime, average Joes stalked by unseen predators, lovers losing their senses in fits of feverish passion.

The dark side of the FM dial provided a playground for some of the era’s most lauded talent to cut loose, and launched careers for a handful of future stars. Because the Sanctum’s signature fusion of lurid content and arch humor toeing the line of camp offered many thespians a reprieve from a diet of soft-focus melodramas and dignified theatre work — not to mention a quick check — it attracted the cream of the day’s crop.

Silver screen monster-men such as Bela Lugosi and Boris Karloff were regular fixtures on the airwaves, the invisible man Claude Rains showed up for “The Haunting Face” (an episode now preserved by the Library of Congress) and two years out from Citizen Kane, Orson Welles dropped in to provide vocals for “Death Strikes the Keys.” Helen Hayes and Mary Astor set a course for the scream queens of the ’70s with their earsplitting terror, and even Frank Sinatra lent his velvety baritone to “The Enchanted Ghost.” For audiences in the ’40s, listening felt like attending a swinging costume party with all their favorite celebrities.

For listeners in 2018, however, the Sanctum and its library of nightmares live on as a totem of nostalgia for a bygone era, both of horror and audio media.

They don’t make radio horror like they used to

The Inner Sanctum Mystery took me unawares on — when else? — a dark and chilly night. During the final hours of an October day’s road trip with a friend, we were scanning the FM dial when an eerie shriek burst onto the radio and caught our attention. After about 20 rapt minutes, we learned that a local affiliate liked to treat Long Islanders to some vintage frights when the according season rolls around.

Though many episodes have been lost to the sands of time, a healthy portion remain available to stream online, and revisiting this curious chapter of horror has become my favorite Halloween ritual. There’s a hokey appeal to the conspicuous old-fashioned-ness of the crackly broadcasts, all corn-syrup blood and rubber bats. Brown pushed the horror envelope by taking advantage of radio’s inability to graphically represent grisly material, allowing the suggestion of depravity and letting the listener’s mind fill in the rest.

Moreover, Sanctum hails from a time when consumers had a more formal relationship with what they listen to. In a pre-TV America, the radio was appointment entertainment, commanding rooms where sitting families would place the sum total of their attention on a narrative that leaves you behind if you zone out. There’s something meditative about doing nothing but sitting and focusing, eyes closed, imagination firing on all cylinders; it raises the zen state of lower wakefulness achieved by moviegoers to the Nth degree. While you listen, everything else stops.

As the popularity of long-form radio storytelling has declined, podcasts have moved in to fill the vacuum, but some of the jerry-rigged charm has been lost along the way. Freed from dependence on a gatekeeping broadcast station, independent outfits everywhere have flooded the internet with anthologies and long-form series updating Sanctum’s template. The White Vault is one such program, following a perilous expedition to a research facility tucked away in a frost-choked wasteland. Producer Travis Vengroff and creator/host Kaitlin Statz agree that the content and the platform housing it have both changed since Brown’s day.

“Older radio teleplays generally emphasized stage acting and live audio design,” they explained via email. “As many of the shows were performed live for radio, they created soundscapes on the fly using whatever objects or tools they could fit in a soundstage… From a production perspective, audiences now expect more.”

Attaining a standard of professionalism is more doable than ever, but that polish has widely supplanted techniques with their own time and place. As Vengroff and Statz put it, “Stories are now pre-recorded, edited, and mastered prior to being released. So instead of shaking heavy paper, actual sounds of thunder might be used, and the sounds of wind and rain might be used in place of a dramatic organ performance.”

That technological evolution is reflective of a wider shift away from the stylized pre-packaged irony embodied by Inner Sanctum Mystery and towards an approximation of real life. “Over-the-top acting was also desirable because shows during that era emphasized excitement,” the White Vault team said, “often taking listeners to distant locales to tell grandiose stories. While a podcasting sub-genre still exists to cater to the fans of the old radio plays, modern audio drama has since shifted its style.”

While the audio drama medium’s evolution clearly points forward, employing more sophisticated equipment and techniques, the limitations of Sanctum’s era forced personal touches that are now easily automated. Statz and Vengroff aren’t bothered by these sea changes, or by the notion that consumers might be taking in their handiwork while cooking, driving, cleaning, working out, or “powering through any mind-numbing tasks.” The listener has claimed dominion over the shape of their entertainment, pausing and playing as they please, streaming and downloading at their own pace.

Maybe it’s time to let the old ways die, and accept that Inner Sanctum Mystery’s specific register of mannered, corn-adjacent horror lives on solely as a novelty in a modern radio landscape. But what is Halloween if not the season of novelty, an occasion for goofy artifice, for plastic and foam?

Excluding only sci-fi, horror attracts more purists than any single genre, and that diehard fanbase can be a double-edged sword. Slasher flicks remain the one trend-impervious box-office bet, as recently proven by the umpteenth Halloween’s resounding success, yet this comes at the cost of some measure of homogenization.

Plenty of people equate horror with straight-faced scares, as if its inherent value can be measured in ounces of cold sweat. Those in search of something a bit kookier can perhaps have a detached chuckle at kiddie-demo Halloween specials, but otherwise, they’ve got to search a little harder.

The Inner Sanctum Mystery, then, serves as an alternative to all things sleek and serious, occupying a universe where the words “gritty reboot” have yet to be uttered. This facsimile of time travel transports listeners to a horror paradigm governed by the notion that being scared should be kind of fun and kind of silly.

Brown preferred to emulate the feel of a fairgrounds haunted house rather than a house actually haunted, with the added benefit that most of his tricks had yet to calcify into cliché. Conceived with a wink and performed with absolute conviction, his work aptly embodies the spirit of Halloween as a jovial celebration of all things frightful. Every day was October 31 in the Sanctum, all the nights stormy, all the screams shrill, all the doors creaky.

Episodes of The Inner Sanctum Mystery are available to stream via archive.org,

The pandemic could get Silicon Valley to do something it has rarely done: Give money to local charit...
Vox Sentences: Your play, NCAA
No one can opt out of this pandemic. And that will change us forever.
Watchmen’s Laurie Blake — and how the show is rewriting her comic book origins — explained
Supreme Court backs California anti-abortion pregnancy centers
Why the US shouldn’t let states go bankrupt