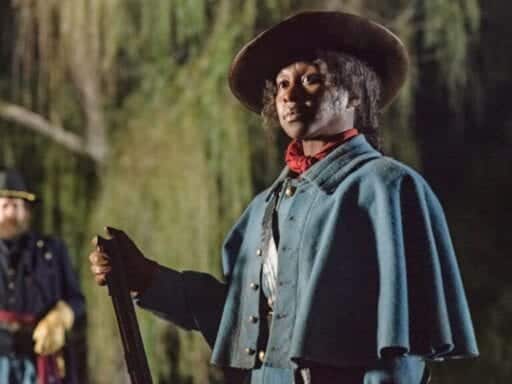 Screenwriter Gregory Allen Howard wrote Remember the Titans and Ali — but it took him decades to get Harriet Tubman’s story to the screen. He blames the industry.

Gregory Allen Howard tells underdog stories. His writing credits include the screenplays for 2000’s Remember the Titans and 2001’s Ali, both movies about sports figures who faced incredible odds.

But his latest project isn’t just about an underdog — it was, itself, an underdog. Harriet, written by Howard and directed by Kasi Lemmons, stars Cynthia Erivo as Harriet Tubman, the slave-turned-abolitionist who led 70 slaves to freedom on the Underground Railroad, spied for the Union Army, and even led soldiers in raids. The film follows Tubman through the pivotal events that made her into an American hero, beginning with her own escape and journey to freedom.

Most American schoolchildren learn Harriet Tubman’s name and story; she was even slated to be the face of the $20 bill in 2020, until Treasury Secretary Steven Mnuchin announced the change would be delayed earlier this year. So it’s surprising that Harriet is the first biopic about such an important woman in American history, considering how this is an industry that loves making historical biopics — surprising, that is, until you remember that Hollywood has typically exhibited skepticism toward the idea that movies led by women and people of color can make money.

Howard experienced that skepticism from studios firsthand with Harriet. Despite his success in the industry, his screenplay languished in development no-man’s-land at Disney for years, until a big box office haul and Oscar win for 12 Years a Slave changed the landscape for historical stories that center on black protagonists.

I spoke by phone with Howard, who was candid about these struggles and the many changes that Hollywood needed to undergo before a movie like Harriet could get made. Our conversation, which follows, has been slightly edited for clarity.

Why did you want to write a movie about Harriet Tubman?

Twenty-five or so years ago, I got hired [to write this screenplay]. I’d just broken into the business. In fact, this was my first assignment with Trilogy Entertainment, which was a big film producer at that time — the company made Robin Hood: Prince of Thieves, among other movies. The executives said, “We want to you write about Harriet Tubman.” I said, “Okay, well, great. I know all about her. But I want to take a different approach. I don’t like history lessons, and I get bored easily when these period movies are made. I just fall asleep. I want to make her an action adventure hero.”

They said, “Okay, well, go for it.” I wrote it, and they flipped out, sent me a bottle of champagne. I said, “Okay, when do we start shooting?” I didn’t know anything about the business.

They said, “We took it to Disney, and Disney loves the script. They’re not going to make it.” I said, “But why?” And they said, “Greg, that’s the business. They have hundreds of projects and they make very few, but you’re going to have a career. And that’s the important thing.”

I said, “Well, thanks. I mean, I appreciate the fact I’m going to have a career. But I spent eight or nine months on this thing, researching and writing. And they’re not … That’s it?”

They said, “Yeah, that’s it. Every writer goes through the same thing. Just let it go and move on.”

They said, “We’re exclusive. You can’t go anywhere. But hey, now you’re the producer. Go get it made!”

They were just saying that to placate me. And obviously it didn’t work. But I didn’t stop trying to get it made.

So even though Harriet feels like a very modern project, it took since the early 1990s to get made, then?

But I didn’t know that at the time. I thought we were all on equal footing. But we weren’t.

Hollywood has taken a really long time to accept the fact that movies about black people might be told on screen, and that audiences would embrace them. Were there any movies over the years that showed you what could happen if that ever changed?

Of course, and there are movies that proved that to my producers, too. For [producer] Debra [Martin Chase], it was Hidden Figures. Mine is 12 Years a Slave. See, what I had heard for all those years was, “Nobody’s going to pay to see the slave movie, Greg. Get out of my office.” But I said, “But it doesn’t matter. If the movie’s good, people will see it.”

And then 12 Years a Slave came out and did massive business. It made almost $200 million worldwide. That’s when I took [Harriet] off the shelf again. And I said, “You can’t tell me what you’ve been telling me all this time.” And they said, “Yeah, but see, that was a different movie.” They came up with a different excuse.

But the truth was that the business was changing. If this movie has been made 10 years ago, it would’ve been an outlier, and no one in town wants to be an outlier. Fear drives our industry, and I don’t know that anybody’s ever gotten fired for passing on a movie.

But boy, if you say yes to something, or even go fight for it, you’re risking your career. You’re certainly risking your job.

Right — if your film “represents” some group that Hollywood executives consider to be a “minority,” such as people of color, then the success or failure of your film is taken as representative of the audience’s interest in your entire group. It’s very different from when a random action movie starring a white guy succeeds or fails.

How did you actually manage to get Harriet over the finish line?

So when it did, I called my agent and said, “Now’s the time we can get Harriet Tubman going.” I hear crickets on the phone. Then he said, “Okay, listen, I can’t put any more time into this. Find a producing partner, someone who will do the work, and we’ll help you get it made.”

I reached out to Debra Martin Chase, who at first didn’t want to read the screenplay. Later, she told me, “I thought it was going to be a history lesson. The only reason I read it was because it was you,” because we had known each other for decades.

She read it, and she said, “Yeah, we can get this done.” And she hung in there. I had heard that from several others, but boy, they bailed out — headed for the exit, wouldn’t return my phone call. But Debra hung in there.

We started the process of getting it away from Disney [who owned the rights to the screenplay], and that took … I can’t even tell you how long that took. They don’t like to put movies in turn-around. [Note: Turn-around is the process by which a studio relinquishes rights to a project under development by writing it off on their tax return. If a movie is put in turn-around, other studios can approach the filmmakers about producing it.] Then the movie may end up getting made — and if it performs well, then they look like assholes.

Then at the end, Focus came in and picked it up and made it happen. Focus said, “Okay, we love it.”

But I’m going to say again — I can’t emphasize this enough — the whole environment in Hollywood had to change. It had to. And I’m glad it did, because I wasn’t advocating changing the industry. Other people were, and that needed to happen before Harriet got made. I wasn’t [personally] an outlier in the business. I was a working screenwriter. I just wanted to get this one moving.

But I didn’t realize what it would take. Somebody had to do something. #OscarsSoWhite, Diversity in Hollywood, all of that had to happen, to set the table for Harriet. So thank you to all those brave people.

I’m also interested in how you actually interpreted Harriet’s story. There are things we know about her, and other things that are just speculation about her life. So how did you approach her character?

For a contemporary audience, Harriet’s story is an underdog story, which is something I write and something I love. As a matter of fact, I would venture to say hers is the underdog of all underdog stories. She was a slave. She was owned. She didn’t have personhood. This is a movie about a person without personhood taking agency.

So her heroics were the banner, but underneath it was her claiming to be a person of her own. When she [says] , “You can’t tell me what I can do. Don’t you tell me what I can’t do” — I mean, she broke the bonds of slavery when she said that.

What kind of research did you do to tell that story?

Well, you’ve got to understand something. There’s no internet when I wrote this. No Wikipedia. I probably read about 20 books. But see, I majored in history, so I wasn’t doing anything that I hadn’t done before. And you’ve got to immerse yourself into the story, so there’s a certain amount of verisimilitude in what you do.

I’ve always found slave history fascinating, and I hope that this stimulates people to read about it more. There’s some seminal works around not just Harriet Tubman, but slavery. I think black people tend to want to turn away from it. We shouldn’t. We don’t want to embrace slavery, but it’s nothing to be ashamed of. We didn’t do it to ourselves. And it’s actually quite heroic that we managed to survive it and claim our agency.

Harriet Tubman has an almost mythological stature, but this movie makes her into a human being.

Yeah, very much so. I wanted to show her as a human being, her frailties. And [director] Kasi [Lemmons] did a great job of doing that, bringing her out of the mythos and making her human.

Listen, I wrote this. It’s my Valentine to black girls. And I said, “If it inspires some black girls that they can do something amazing, then I’ve done my job. “

Do you feel like there’s something you learned from Harriet?

Well, it sounds like a cliche, but you can achieve the insuperable. You can overcome the thing that is against you. I’ve always been inspired by that. When people would tell me “no” about making this movie, I just ignored it. It just didn’t mean anything to me. So what? They’re wrong. Harriet’s story deserves to be told just like these other stories. You got to look at the arc and the journey of her character — this is the most amazing of amazing stories, in my humble opinion. It’s the ultimate underdog story, and that’s what attracted me to it in the first place.

Harriet opens in theaters on November 1.

Awful online coronavirus hoaxes keep popping up
How the slow sabotage of Obamacare may hurt America’s breastfeeding rate
Why American public transit is so bad
Sex workers are in danger. Warren and Sanders are backing a bill that could help.
How the Navajo Nation helped Democrats win Arizona
The raging controversy over “Bernie Bros” and the so-called dirtbag left, explained