Why there’s a ring of natural disasters around the Pacific 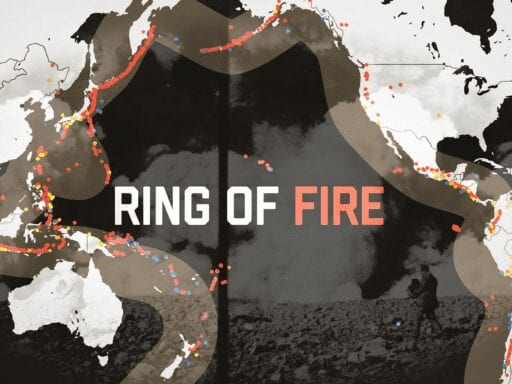 The belt of volcanic activity is called the Ring of Fire.

2018 has seemed like a busy year for volcanoes. Mount Mayon in the Philippines spewed ash into the sky for over a month. The eruption of Mount Sinabung, in Indonesia, was seen from space and Guatemala’s Fuego volcano killed more than 100 people in June. Turns out, the amount of activity is pretty normal. Scientists say that on average 10-20 volcanoes are erupting at any given time. What’s more interesting is where they are situated.

All three of these volcanoes are located along the edges of the Pacific Ocean in a stretch called the “Ring of Fire.” The band, which spans about 40,000 kilometers, not only has the largest concentration of volcanoes in the world, it’s also where most of the earthquakes and tsunamis occur.

For countries located along the Ring of Fire, the question is not if a natural disaster will occur, it’s when.

Watch the video above to learn about the Ring of Fire and what countries are doing to protect themselves. Subscribe to our YouTube channel to view all of our latest videos.

A top Away executive quit on the same day the startup’s embattled founder said she was returning as ...
Why the deal for striking GM workers is hardly a victory
Bernie Sanders’s definition of democratic socialism, explained
The #FallingStars challenge highlights extreme wealth — and extreme inequality
2019 Pulitzer winner Fairview is the most productively uncomfortable play I’ve ever seen
Meet the women suing America’s biggest companies over equal pay