Why this law could be a bigger threat to Roe v. Wade than near-total abortion bans 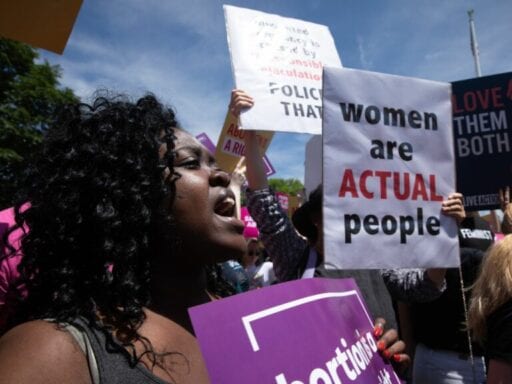 Share
Loading...
Activists on both sides of the abortion issue demonstrate outside the US Supreme Court on May 21, 2019. | Aurora Samperio/NurPhoto via Getty Images

An Arkansas law is less sweeping than bans on abortion in places like Alabama. It could be more dangerous for Roe v. Wade.

Near-total bans on abortion in Alabama and elsewhere around the country have gotten a lot of coverage in recent months.

But an Arkansas law requiring physician certification could have nearly the same effect without banning the procedure outright — and it might have a better shot at surviving a court challenge.

The law imposes new certification requirements on doctors who provide abortions, which abortion rights advocates say are medically unnecessary. It would also cause Little Rock Family Planning, the only clinic in the state that provides surgical abortions, to shut down. The state’s one other clinic provides only medication abortions, which are only available in the first 10 weeks of pregnancy, leaving the Arkansas law to essentially function like a 10-week ban.

“It would be extraordinarily damaging to patients’ access to abortion care,” Lori Williams, the clinical director of Little Rock Family Planning, told Vox.

For now, the law is on hold — one of three Arkansas abortion laws to be blocked by an eleventh-hour restraining order Tuesday night. But the order is temporary, and a hearing on the merits of the case is still to come. Meanwhile, some experts think that laws like the one in Arkansas have a better chance of getting a Supreme Court hearing than more extreme, and unpopular, near-total bans. If Roe v. Wade does fall, the law that topples it may look more like Arkansas’s than Alabama’s.

The Arkansas law would effectively ban abortion after 10 weeks

The Arkansas law was scheduled to take effect at midnight on Tuesday. Passed by the state legislature last session, it would have required that doctors who provide abortions in the state be board-certified or board-eligible in obstetrics and gynecology. Doctors who are not OB-GYNs — for example, family medicine physicians or internal medicine physicians — routinely provide abortions in Arkansas and elsewhere. But under the new law, they wouldn’t be able to.

According to the American Civil Liberties Union, which is suing on behalf of the clinic, the new restriction is medically unnecessary. “The weight of the evidence demonstrates that there is no medical benefit to this law,” Meagan Burrows, a staff attorney for the ACLU’s Reproductive Freedom Project, told Vox.

Little Rock Family Planning only has one provider who is a board-certified OB-GYN, and he comes to the clinic for just one week every two months, Williams said. When the law passed, the clinic, which serves about 2,500 patients every year, faced closure. It is the only facility in the state that provides surgical abortions, and the only one that offers the procedure after 10 weeks.

The facility got a reprieve, however, at 11:45 pm on Tuesday, just minutes before the law was to take effect. Judge Kristine Baker issued a temporary restraining order blocking the law along with two other restrictions: a ban on all abortions after 18 weeks’ gestation, and a ban on abortions because of fetal Down syndrome diagnosis. The order expires on August 6, but Baker will also consider whether to issue an injunction that would block enforcement of the laws on a longer-term basis while the ACLU pursues its case.

“The attorneys and particularly all of the providers on the ground and Little Rock Family Planning are just so relieved that this order is now in place,” Burrows said.

If the Supreme Court wants to revisit Roe v. Wade, it might look to cases like the one in Arkansas

What happens next in Arkansas depends on Judge Baker and state officials. If Baker does issue an injunction blocking the law on a more long-term basis, the state could appeal that decision to the Eighth Circuit Court of Appeals, Burrows said. Depending on how the appeals process goes, the case could make its way to the Supreme Court.

Advocates on both sides of the issue have been watching the Court closely ever since the appointment of Justice Brett Kavanaugh last October, because he’s widely seen as a potential deciding vote to overturn Roe v. Wade, the landmark 1973 decision that established the right to an abortion in America.

After Kavanaugh joined the Court, a number of states passed near-total bans on abortion, many with the explicit goal of forcing the Court to reconsider Roe.

“What I’m trying to do here is get this case in front of the Supreme Court so Roe v. Wade can be overturned,” Rep. Terri Collins (R-AL), sponsor of an Alabama law that bans abortion at any stage of pregnancy, with no exceptions for rape or incest, told the Washington Post earlier this year.

But some experts speculate that because the bans are written specifically as Roe challenges, and not as well-formed laws — and because they’re very unpopular, especially if they don’t include rape and incest exceptions — the Supreme Court may not want to use them as vehicles to overturn Roe.

Clarke Forsythe, senior counsel for the anti-abortion group Americans United for Life, wrote at National Review earlier this year that since the Supreme Court wants to avoid the appearance of partisanship on abortion, it might choose a case involving a less extreme, less polarizing law. A law like the one in Arkansas, which has the effect of banning abortion after 10 weeks but doesn’t do so outright, might fit the bill.

Meanwhile, some say the Supreme Court won’t want to overturn Roe v. Wade all at once. Chief Justice John Roberts “cares about optics, and so dismantling Roe with no prior warning that that was coming, in one decision, I think would be surprising and out of character,” Mary Ziegler, a law professor at Florida State University who studies the history of the abortion debate, told Vox.

Instead, the Court might prefer to chip away at Roe over time, and cases like the one in Arkansas could offer ways to do that.

Some proponents of the near-total bans have framed them as a way to force the Supreme Court to overturn Roe. But, Ziegler said, “no one can force the Court to do anything.”

When it comes to getting the Court to restrict abortion rights, “what’s worked in the past is for anti-abortion litigators to kind of give the court a menu of options,” Ziegler said, and “let them do it when they want and the way they want.”

While the Arkansas case could one day be part of such a menu, similar cases in other states are even closer to reaching the Supreme Court. For instance, the Court is already considering whether to hear a case involving a Louisiana law requiring abortion providers to have admitting privileges at local hospitals, something abortion rights groups also say is medically unnecessary.

“We’re currently relying on the courts to continue to fight these laws,” she told Vox, “but that’s more and more precarious.”

The Democratic National Convention has been postponed until August 17
America’s contradictions are breaking wide open
Daredevil season 3 is a return to what made the show so good in season 1
Vox Sentences: Maine moves to expand abortion access
A new solar heat technology could help solve one of the trickiest climate problems
The big divide among 2020 Democrats over trade — and why it matters