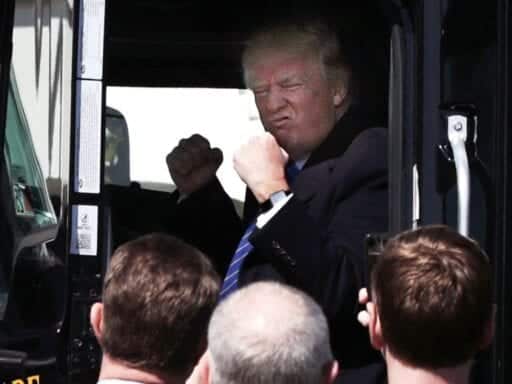 Ahead of trade talks with European Commission President Jean-Claude Juncker this week, Trump said he is ready to impose a 20 to 25 percent tax on imported automobiles and auto parts if negotiations don’t go well. The Commerce Department is currently investigating whether auto industry imports threaten national security, a process Trump must go through before imposing tariffs without Congress’s approval.

“We said if we don’t negotiate something fair, then we have tremendous retribution, which we don’t want to use, but we have tremendous powers,” Trump said ahead of the meeting. “Including cars — cars is the big one. And you know what we’re talking about with respect to cars and tariffs on cars.”

The threat of car tariffs — a tax on imports — has already terrified free trade Republicans and Democrats on Capitol Hill who worry this move will only intensify Trump’s trade war to an unclear end. And even the US car industry, which these tariffs would supposedly be designed to protect, has come out against the idea, worried it might become even more expensive to make cars, invest in development, and keep employees. Trump’s own administration is overwhelmingly against the idea, Politico reported.

But Trump has made it clear that he thinks the European Union, Canada, Mexico, and China are unfair trade partners, abusing the United States’ alliance by artificially keeping their interest rates low and imposing high tariffs. On Thursday and Friday of last week, Trump appeared to be picking a fight with the US’s trade allies on Twitter.

There are two schools of thought among economists: Either this is an empty threat to increase his leverage in trade negotiations and get other countries to lower their tariffs or Trump is absolutely serious about imposing more tariffs — this time on a consumer good. At this point, with the tariffs on foreign steel and aluminum, Robert Litan, a former Bill Clinton aide and Brookings Institution fellow, said it’s time to take the president at his word.

“Until he actually put in the steel and aluminum tariffs I think the markets and people generally discounted it; it was just bluster,” Litan said. “But that period is over. It’s not bluster. It’s real. [Trump] sees nothing wrong with tariffs and nothing wrong with a trade war. He’s doing what he said. Then the next step in the game: Are the Europeans going to retaliate? They are not going to cave. No one is caving so far.”

In the days ahead of Trump’s trade talks with the European Union, the president took to escalating tensions with Canada, China, Mexico, and Europe over what he sees as unfair trade practices.

The United States imports more cars than anywhere else in the world — it’s a nearly $200 billion market. Mexico and Canada are the biggest suppliers of US car imports, followed by Japan and Germany. And the United States is part of a very globalized car industry. In 2017, only half of the cars sold in the US were made in the country. And among the cars that are made in the US, one-third to one-fourth of the parts were usually imported from other countries. That global supply chain is what car industry insiders say keeps the United States competitive.

Depending on whom you ask, the possibility of foreign car tariffs is either terrible or completely grounded. The US car industry has been on the decline for the past two years, with its lowest car sales since 2009 last year. Labor unions have been more favorable to the idea of tariffs, but even they have warned about disrupting the supply chain between countries.

Elizabeth Baltzan, an international trade lawyer and former Democratic staffer on the House Ways and Means Committee, pointed out that it’s not hard to make the argument that the auto industry is crucial to the American economic fabric — and therefore a matter of national security.

“Obama not only did a bailout for auto workers but the parts suppliers too, because that’s how important the industry is to the American economy,” she said.

But others, like Simon Lester with the libertarian CATO Institute, say the cost of a trade war — especially on consumer products — is far too high to save an industry without much room for growth. Already there have been industry reports ringing the alarm bells that these tariffs could increase the cost of cars. A report commissioned by the National Automobile Dealers Association found that car prices could increase by $980 to $4,400 for consumers, and while the United States would increase vehicle production, jobs would be lost at car dealerships.

The Trump administration “envisions this glory era of the 1930s [through] 1950s, when the economy was dominated by steel and auto, and the US failure to dominate these industries is a problem that needs to be fixed,” Lester said. “The way modern factories work, you aren’t going to employ that many more people. … If the EU got rid of the tariffs on cars, I’m not sure the US could capitalize on that.”

There is a point of agreement among economists, lawyers, and academics: There’s no clarity what’s Trump’s endgame is — what will constitute enough of an American victory to end a trade war?

European negotiators are not backing down. Juncker said he’s “upbeat and relaxed” heading into talks with Trump at a news conference this week.

“We will continue to react tit-for-tat to the provocations that might be thrown at us,” he said.

It’s clear that Trump is upset, and isn’t scared to follow through on tariffs. Earlier this year, the administration levied a 25 percent tariff on steel imports and a 10 percent tariff on aluminum imports. China, Mexico, and Canada have retaliated with tariffs largely targeting American agriculture. They have said they would do the same with a foreign car tariff.

The tariff regime is posing an interesting political dilemma for Trump’s party. The president’s position on trade is largely one held by Democrats like Ohio Sen. Sherrod Brown. Republicans have long balked at the idea, and now they have to either break with their leader or convince themselves to support it.

Republicans are stuck between wanting free trade and standing by Trump

It’s pretty unusual to see Republican lawmakers and a group of corporate representatives protesting the actions of a Republican president. But with Trump’s trade agenda, that’s become the reality.

Last Thursday, a group of lawmakers led by Rep. Jackie Walorski (R-IN) led a “drive-in” rally with companies including Toyota, Kia, Honda, decrying foreign car tariffs. Walorski and a bipartisan group of 149 lawmakers sent a letter to the Trump administration urging them not to go forward with new tariffs.

“We do not believe that imports of automobiles and automotive parts pose a national security threat. Rather, we believe the imposition of trade restrictions on these products could undermine our economic security,” the lawmakers wrote.

In the Senate, Sens. Lamar Alexander (R-TN) and Doug Jones (D-AL) say they will release a bill early next week that would reportedly freeze the Commerce Department’s investigation into the auto industry — part of the process for Trump to enact tariffs without congressional approval. Sen. Jeff Flake (R-AZ) led a symbolic effort to vote on a resolution showing the Senate is against Trump’s trade agenda.

Yet it’s not clear how far Republicans will take this: Trump is still popular with the Republican base, and lawmakers have shown an unwillingness to buck the president, no matter how much he breaks with party norms. But these tariffs will take an outsize toll on Republican lawmakers who represent more rural agricultural districts that are usually hit hardest by retaliatory tariffs in trade wars.

A number of Republicans have already convinced themselves that Trump’s trade agenda is fine as long as it is short-lived.

“I think it’s right for the administration to insist that China abide by the agreements. I think it’s right to renegotiate trade deals that have outlived their usefulness — NAFTA is over 25 years old,” Rep. Mike Conaway (R-TX), who chairs the House Agriculture Committee, said. “My message to the president is, ‘Get this done. Get this done quickly.’”

“I believe the president would be in favor of no tariffs for anybody,” he said. “Obviously, I’m one that can see the strategic advantage of short-term tariff saber-rattling to get everybody to make sure we have fair trade.”

But how short this trade war will be is anyone’s guess.

“I have lived through a number of wars; it’s a rare thing once it has started to be as short and planned as people think,” Brookings’s Litan said. “I think trade wars are no different.”

Why you’re seeing the 10-Year Challenge everywhere
The caravan is still weeks from the US border — and it’s already shrinking
The controversy over Mark Zuckerberg’s comments on Holocaust denial, explained
Brexiteer to Irish backstop: a handy Brexit glossary
Mixing ketchup and mayonnaise isn’t new. Here’s why Heinz is trying to cash in on it now.
6 months after a major public controversy, YouTube is changing its anti-harassment policies