Why Trump is an easy mark for Putin 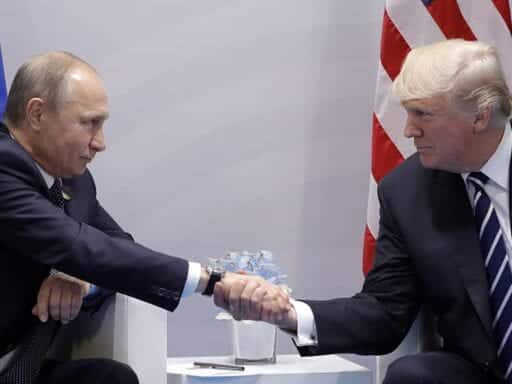 A former US ambassador to Russia breaks down the Trump-Putin meeting.

President Trump is sitting down for a one-on-one meeting with Russian President Vladimir Putin in Helsinki on Monday, just four days after Trump blasted US allies at the NATO summit in Brussels for not paying their fair share of defense spending.

The Trump-Putin relationship is strange for a number of reasons, most obviously because there’s an ongoing investigation into Russia’s meddling in the 2016 US presidential election. But this meeting is particularly strange because the only real preparation for this sit-down seems to be a single trip to Moscow by Trump’s National Security Adviser John Bolton.

As far as we know, there are no clear policy objectives for this meeting, which means there are few if any constraints on the conversation. That isn’t necessarily a bad thing, but it is certainly unusual.

Michael McFaul was US ambassador to Russia under the Obama administration and is the author of From Cold War to Hot Peace: An American Ambassador in Putin’s Russia. McFaul spent several years in Russia and he has negotiated with Putin’s government many times.

I reached out to him to discuss what Trump should expect when he sits down with the canny former Russian KGB operative-turned-president, how the meeting could go wrong, and why Putin almost certainly has the upper hand.

At a press conference in Brussels last week, Trump said that Putin is a “competitor,” not an “enemy,” and he went on to say how “nice” Putin has been to him. What do you think when you hear that?

Well, they’ve only met once, so it’s not like they have a deep, personal relationship. What I hear there is someone who is desperate to get along with President Putin, not unlike the way he’s treated other strongmen, like Kim Jong Un. Philosophically, I could understand that if talking this way was going to achieve some concrete American national security objectives, but it generally doesn’t work that way in diplomacy.

Flattery won’t work with Putin. It won’t get him to do any “favors” for us, which is a word I’ve heard Trump use often. It could work, I’d accept the trade. The problem is, I don’t think it will work and, secondly, I don’t know what Trump is trying to achieve here. It’s simply not clear.

Is it a mistake for Trump to hold this meeting with Putin?

No, I’m not in that camp. We engage with autocrats and adversaries all the time. We did this during the Cold War under very perilous times. So generally I’m not against holding summits, even with people like Putin. But in this particular instance, it just doesn’t feel like there’s an agenda to advance.

When I was in the Obama administration, that was the way we approached all summits with Russian leaders. The first question we asked was, “What set of objectives are we going to advance by having this meeting?” And we canceled a summit with Russia that was scheduled in 2013 because there was no concrete agenda to advance and because Putin had granted asylum to Edward Snowden.

We decided that was too much of an affront for us to move forward with the meeting. What Putin has done in the last couple of years, however, is completely outrageous compared to what he did in 2013.

There doesn’t seem to be any downside for Putin to have this meeting. People worry that Trump might agree to something foolish in a meeting like this, but he’s already helping to advance Putin’s foreign policy, so it’s not clear to me why anything said here will really matter.

That’s correct. In terms of his other behavior, Trump is definitely advancing policy outcomes that Putin favors. What he did in Brussels last week, for example, was absolutely in Putin’s interest. But it’s important to remember that there is a danger simply in having the meeting if there’s nothing to be gained from it.

And of course, there’s also the possibility that Trump will give something away or agree to a deal that helps Putin and does nothing to advance American interests.

What’s it like to be in a room with Putin? What is Trump walking into?

Well, Putin has been at this for two decades. He’s been dealing with national security and foreign policy issues his entire life, and this is now the fourth American president he’s dealt with. As a consequence of all that, he knows these issues really well and much better than President Trump does.

Putin is going to seek objectives. He’s going to sit down with his advisers and say, “These are the things that we are seeking to accomplish.” And certainly one of them is to ensure that he and Trump don’t talk about Russian meddling in our election or any of those things I mentioned a second ago. But he’s also likely to push for a deal that will lead to the withdrawal of the American presence in Syria.

The point is that Putin will be prepared for this meeting, and he will come with a clear plan. I hope our side is doing the same thing, but there’s not much evidence to support that from the outside.

Trump strikes me as an easy mark for someone like Putin. As world leaders go, I’m not sure I’ve ever seen anyone as easy to manipulate as Trump. It’s hard to imagine Putin not having the upper hand here.

Yes, Putin has the upper hand. The fact that Trump is having this meeting in spite of Russia’s meddling in our election, and the fact that he’s so unwilling to speak critically of Putin publicly, sends the signal that we are so anxious to engage with Russia that we’re willing to forget about those things. Putin is a smart guy; he understands this, and he’ll take advantage of it.

“Flattery won’t work with Putin. It won’t get him to do any ‘favors” for us.’”

How does this meeting look from the perspective of US allies in Europe? How do they interpret it?

If you were advising Trump, what would be your advice to him heading into this meeting?

First, don’t praise Putin. There’s no reason to pretend he’s your friend. He’s not your friend.

Second, advance America’s national interest in this meeting. We don’t need a meeting to get to know Putin, to engage in meaningless happy talk. That’s a waste of presidential time.

Third, avoid bad deals, and in particular avoid any deals that reduce America’s influence at the expense of empowering Russia.

Finally, and it should be obvious, but make no concessions on Crimea or Ukraine or sanctions until Russia has changed its behavior.

Jeffrey Epstein wasn’t on suicide watch when he died. Officials want to know why.
The radical moral implications of luck in human life
Taylor Swift will release a new album in August and a new single on June 14
You don’t just watch a Spike Lee movie. You’re part of it.
Americans are one step closer to a national contact tracing app for Covid-19
The big difference in 2020 health plans isn’t among Democrats