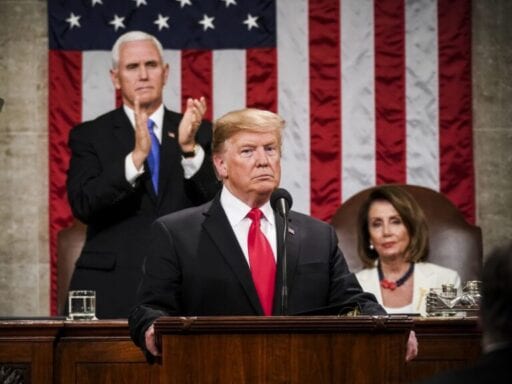 “Let us work together to build a culture that cherishes innocent life,” said President Donald Trump during his State of the Union speech on Tuesday night. “And let us reaffirm a fundamental truth: All children — born and unborn — are made in the holy image of God.”

In uncharacteristically extensive comments on the subject, Trump criticized efforts to loosen abortion restrictions in New York and Virginia. He also called for federal anti-abortion legislation.

Trump had been planning for several days to incorporate anti-abortion language into his speech, Politico reported, inspired by recent pushes to lift abortion restrictions at the state level.

In particular, Trump was reportedly outraged by Virginia Gov. Ralph Northam’s comments in support of a Virginia abortion bill last week, which some interpreted as an endorsement of infanticide. Trump devoted several minutes of a State of the Union planning meeting on Tuesday to a “diatribe” about the comments, according to Politico.

Controversy around abortion is gaining steam nationwide in 2019, as advocates on both sides push legislation in anticipation of a potential challenge to Roe v. Wade. As reproductive-rights advocates back bills in New York, Virginia, Vermont, and elsewhere in an effort to shore up access, conservatives have responded with outrage.

Trump appears to be responding to the debate by turning up his rhetoric around abortion, not historically a top issue for him. His position on abortion rights has changed over the years, and he has at times appeared to have a poor grasp of the law and politics around the issue. But he did bring up abortions — specifically procedures late in pregnancy — in the final debate of his 2016 presidential campaign, suggesting he knew the issue might be important for him with social conservatives. And in the run-up to 2020, he may see the issue as more important for his political future than ever.

On Tuesday night, Trump referenced what he called “chilling” abortion legislation in New York and Virginia.

“Lawmakers in New York cheered with delight upon the passage of legislation that would allow a baby to be ripped from the mother’s womb moments before birth. These are living, feeling, beautiful babies who will never get the chance to share their love and dreams with the world,” he said.

Trump was referring to New York’s Reproductive Health Act, which passed last month. The new law allows abortions after 24 weeks if the fetus is not viable or there is a risk to the mother’s health, a provision supporters say is necessary to prevent situations in which pregnant women are forced to travel long distances and pay thousands of dollars for the procedure, sometimes when they are very ill. Opponents of the law, however, have argued that it could be a back door to legalizing all abortion after 24 weeks.

Abortion rights advocates say Trump’s comments about abortions “moments before birth” are misleading, given that only around 1 percent of abortions nationwide take place at 21 weeks’ gestation or later. “Tonight, we heard the President make inaccurate and deliberately misleading claims about safe, legal abortion and bills that are meant to protect women’s access if Roe v. Wade were to be overturned,” said Dr. Leana Wen, president of Planned Parenthood Federation of America, in a statement.

Trump next turned to the Ralph Northam and the Virginia bill. “And then,” Trump continued, “we had the case of the governor of Virginia where he basically stated he would execute a baby after birth.”

Northam made comments last week comments in support of Virginia’s HB 2491, a bill that would expand the circumstances under which a patient could obtain an abortion in the third trimester. Appearing to talk about what would happen if a baby was born after a failed abortion, he said, “the infant would be resuscitated if that’s what the mother and the family desired, and then a discussion would ensue between the physicians and the mother.”

Some took the confusing comment as an endorsement of infanticide, though a spokesperson for the governor told Vox that was “absolutely not” what Northam meant. His comments, the spokesperson said, “focused on the tragic and extremely rare case in which a woman with a nonviable pregnancy or severe fetal abnormalities went into labor.”

HB 2491, which has been tabled in the Virginia House of Delegates, would not actually change the time limit for obtaining an abortion in Virginia. Current Virginia law allows third-trimester abortions if continuing the pregnancy would “substantially and irremediably impair” the mother’s mental or physical health — HB 2491 would remove the “substantially and irremediably” language, allowing abortion if the pregnancy might damage the mother’s health, even if the damage might not be irreversible.

“To defend the dignity of every person, I am asking the Congress to pass legislation to prohibit the late-term abortion of children who can feel pain in the mother’s womb,” he said.

The discussion of abortion at the State of the Union was something of a departure for Trump. In the final 2016 presidential debate, he said, “Hillary is saying in the ninth month you can take the baby and rip the baby out of the womb of the mother,” and he has repeated such language since. But he rarely talked about the issue in campaign speeches and did not bring it up at last year’s State of the Union.

However, discussion of abortion may become more common for the president as he and other conservatives see it as a potentially winning issue in 2020.

“Mr. Trump’s appointment of two conservative justices to the Supreme Court has won him the allegiance of conservatives who otherwise would have been skeptical,” Vivian Wang notes at the New York Times. And taking aim at progressive attempts to lift abortion restrictions might help him win conservative voters who are uncomfortable with him personally.

This is especially true at a time when the abortion debate, always impassioned, is heating up thanks to the potential of a challenge to Roe v. Wade. Abortion rights supporters are trying to shore up protections at the state level in case the landmark decision is overturned — and they’re already seeing a backlash from conservatives who want to see abortion restrictions tightened, not loosened.

Given all this, Trump’s words on abortion on Tuesday night may be a preview of a more aggressive stance on the issue in the run-up to 2020.

Update: This story has been updated to include a statement from Dr. Leana Wen, president of Planned Parenthood Federation of America.

Study: more people reported sex crimes around the world in the wake of Me Too
Will new rules make the Democratic Party stronger?
A brutal video shows a black trans woman getting beat up by dozens of men
Awkwafina made history with her Golden Globe win for The Farewell
Fandom’s new “ship dynamics” meme is all about our fave romantic tropes
Trump’s Iran whisperer