Why Trump’s Putin meeting was worse than you think 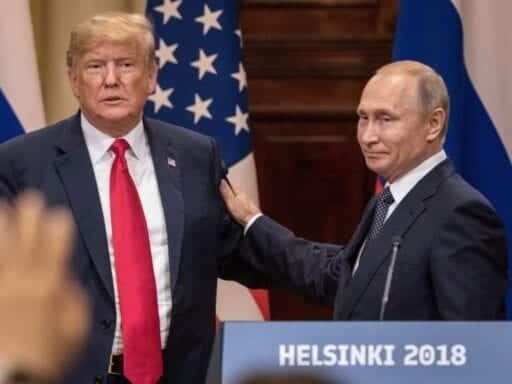 It’s not just that Trump trashed America’s intelligence community — it’s that he did so while getting very little from Putin.

US President Donald Trump and Russian President Vladimir Putin’s press conference on Monday after their meeting in Helsinki was, by many accounts, a disaster.

But that’s not even the worst part.

Yes, Trump bashed America’s intelligence agencies while siding with Putin — and he received basically nothing in return for it.

Here’s what Putin “got” during his 45-minute press conference with Trump:

That’s a lot of points on the board for Putin, but surely Trump matched — or even surpassed — those wins, right? In reality, it wasn’t even close.

Here’s what Trump gained (and all three of these points are potentially good for Putin, too):

So Trump, when given his best opportunity to lambast Russia on the world stage and display America’s global leadership, let Putin off easy. But he gave a lot in return.

“It looks like US national interests would have been better served had Trump stayed home,” Steven Pifer, a Russia expert at the Brookings Institution, told me.

The Trump-Putin meeting could have been much worse

There is, however, another way of looking at the whole ordeal: Trump could have given away a lot more than he did.

Experts feared Trump might strike a deal with Putin over Syria that would include the US removing its 2,000 troops from the country and letting Russia manage the end of the war. That would have been a bad trade, especially since Russia has no incentive to stop helping Assad attack US-backed fighters in the country.

Trump also could have recognized Russia’s illegal takeover of Crimea. Last month, Trump reportedly told leaders at the G7 summit in Quebec that Crimea might as well belong to Russia because the majority of people there speak Russian — a talking point straight out of the Kremlin.

Yet Putin noted, oddly, during the press conference with Trump that the US position still held that Crimea belongs to Ukraine.

The summit actually had little substance to it; it was so hastily put together over the past few weeks that neither side had enough time to hammer out any major diplomatic announcements.

But that didn’t stop Trump from doing a lot of damage by giving Putin much of what he wanted and handing the Russian leader a major victory in the process.

“Unless there is something we don’t know about, this was a very good summit for Putin,” says Pifer.

The profound gay love stories of The Old Guard and Song of Achilles
23andMe laid off 100 employees due to slowing DNA kit sales
Mueller has been questioning Michael Cohen on Trump’s Russia ties
8 winners and 5 losers from the topsy-turvy 2019 Emmy Awards
Military coup in Myanmar: news and updates
Millennials were just starting to feel economically stable. Now we’re being hit with another recessi...