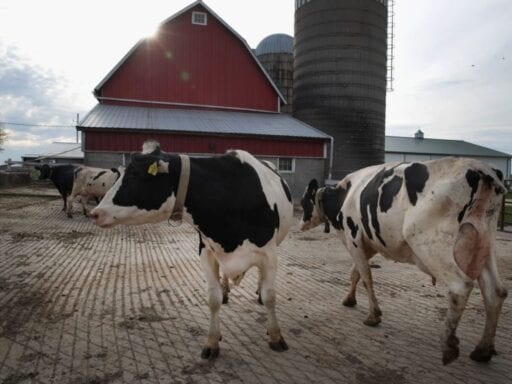 “I think everybody in the dairy industry is a little nervous right now.”

This is not a drill. The United States is stockpiling a mountain of cheese as big as the US Capitol Building.

If the Trump administration pushes a restrictionist trade policy agenda — through the proposed Fair and Reciprocal Tariff (FART) Act (yes, that’s its actual name) — the government’s cheese glut could grow even bigger. The Washington Post reported last week that the United States currently has 1.39 billion-pound stockpile of cheese sitting in warehouses across the country; the largest cheese surplus in history.

The government isn’t preparing for an apocalypse; when times are tough, the government buys up American dairy products to reduce supply, increase the price, and stabilize the market. They keep the dairy in storage as cheese (because it doesn’t go bad as fast), and it usually ends up in school lunches or goes toward foreign aid.

As it turns out, there’s a lot of extra dairy in the United States. Dairy farms have increased dairy production over the last decade; farmers have both upped production on the whole, and breeding and innovations in technology mean cows are individually producing more milk. But demand for dairy isn’t stable.

Farmers are familiar with these kinds of market fluctuations — but changes usually brought on by diet fads and natural economic cycles have taken new meaning under the Trump administration.

“I think everybody in the dairy industry is a little nervous right now — they’re not sure what is going to happen,” Roger Mehre, who runs a small dairy farm in Wisconsin, told Vox, in light of Trump’s talk on international trade.

In the past few months, Trump’s administration has proposed steel and aluminum tariffs, and increased tensions with trade allies in Europe, Asia, and North America. This week, reports of a White House proposal that would call on the United States to disregard World Trade Organization rules are making lawmakers on both sides of the aisle fret that the United States could be staring down a trade war — one that is likely to hit the agricultural industry the hardest.

On the surface, this is a story about a lot of excess dairy. But underlying this mountain of cheese is a tale of an already volatile agriculture industry in even more flux in the Trump era. The Midwest was an important Trump’s win in the 2016 election — but farmers are worried his policies might hurt there the most.

“Farmers, the majority of them did vote with President Trump — they generally agree with where Trump is willing to go,” Chad Hart, a crops market specialist with Iowa State University, said. “But farmers are worried that they are asked to shoulder a lot of the burden with retaliation.”

The volatility in the American dairy market is so severe that some have compared the spikes and crashes to that of the crude oil market; for farmers, the price of milk can fluctuate 20 to 40 percent in a year.

“The last 10 years have been just wild,” Mehre said of the dairy market prices.

Farms have a hard time keeping up. After all, it’s not easy to just get rid of cows when prices are down, then add on cows when the market is doing well again. In 2014, China’s growing economy kept calling for more and more American milk, and dairy prices began to soar. Farms expanded to meet demand. Then it all crashed. Brad Plumer explained the drop for Vox:

At the same time, the European Union decided to lift domestic caps on milk production, greatly increasing supply. Then Russia slapped sanctions on foreign cheese in retaliation for Western sanctions. Meanwhile, the stronger US dollar meant that American dairy farmers had a tougher time exporting their products.

All of a sudden, the United States was producing a lot of dairy, and had no one to buy it. So the government stepped in, as it has in similar market crashes in the past, storing dairy — as cheese — to reduce how much was in the market, and drive up prices. Before 2012, this “government cheese” would just sit in warehouses, and largely go unconsumed. That changed under President Barack Obama’s administration, which sent the cheese to food banks and school lunch programs, or in foreign aid packages.

Every country has different ways of managing these fluctuations. Canada, for example, manages supply by having extremely high tariffs on dairy, and giving farmers a quota of production to ensure there isn’t a surplus. The United States doesn’t have quotas and tries to regulate the market with subsidies and buy-ups.

So the US has the largest domestic reserves of cheddar, Swiss, American, and other cheeses on record. There is growing concern that this surplus could grow even larger under the Trump administration, which unlike Obama’s administration — and Republican administration’s before it — has espoused a very restrictionist view of trade. He’s threatened raising tariffs on some of the United States’ closest allies. All of this could have a serious impact on the United States’s agricultural exports.

“We have had ups and downs in the industry before — especially with dairy, we see fairly significant swings, particularly with consumer tastes,” Hart said. “What’s different now is this international component.”

Trump’s FART Act is throwing cheese to the wind

The White House’s trade agenda made headlines this week when Axios reported that the administration is floating the FART proposal, which essentially calls on the US to ignore some of the core WTO rules on how countries treat trade partners. The proposal would give Trump the power to ignore the “most-favored nation” principle, which requires countries treat all their trading partners equally.

That said, Trump has been clear and consistent about his restrictionist trade agenda. People in the American agriculture industry know that if the administration follows through on this, they’re the ones that are going to hit.

Agriculture has incredibly low barriers to trade, making the industry an easy target for retaliatory tariffs. Already, there have been reports that the Chinese government is readying to put 25 percent tariffs on American wheat and more than 100 other exports.

“It’s one of the few areas that the US has a surplus, it makes sense they would target that,” Hart said, adding there’s a political strategy element as well. “It makes sense politically, because you are looking at Republican leadership — and farmers do tend to vote more Republican.”

The United States has about $140 billion of agricultural exports a year. Canada and Mexico are major trade partners, together importing about $39 billion. China, Japan, and South Korea import around $39 billion, and Europe makes up around a $12 billion share of agricultural imports. But tensions are high across the board.

“I almost get the feeling that [Trump] is trying to be a bully and he is making these countries bow to him, and that’s just not going to happen,” Mehre said, pointing out that this isn’t just dairy. It’s pork, soy beans, corn, poultry — the list goes on. “We need them and they need us. Both sides are going to lose.”

He added, “Trump’s gotta be very careful on what he says and how he says it.”

Agriculture Secretary Sonny Perdue has tried to assure farmers they will be protected from any trade wars. But farmers don’t have a clear idea what the president’s end game is, and Trump hasn’t treaded lightly with his rhetoric.

While many farmers are Republicans and Trump supporters — and generally can get behind Trump’s call to equalize the playing field — there is an understanding that farms could get seriously hurt in the short term. It’s something Republican lawmakers from agricultural states, like Sen. Ben Sasse (R-NE), have warned the administration about.

“This is dumb,” Sasse said. “Europe, Canada, and Mexico are not China, and you don’t treat allies the same way you treat opponents. We’ve been down this road before — blanket protectionism is a big part of why America had a Great Depression.”

What women in Congress want from Facebook
Most Democrats and Republicans think the government should make climate change a priority
Trump’s push for South Carolina Republicans to vote for Sanders went unheeded
Trump’s Colorado rally featured an extended meltdown over 30 seconds of critical Fox News coverage
Recessions are always racist. This one could be catastrophic.
Social distancing won’t just save lives. It might be better for the economy in the long run.