Why Turkey is invading Syria 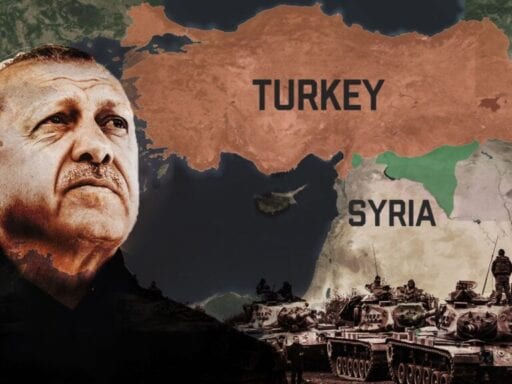 And how it’s getting what it wanted.

Turkish President Recep Tayyip Erdoğan has had his eyes on northern Syria for years. Turkish forces attacked the region in 2016 and 2018. Erdoğan justified the attacks by arguing that his country needed to create a so-called “safe zone” in northern Syria to serve as a buffer against the ongoing Syrian war.

By 2019, political discord was mounting against Erdoğan. To win back favor, the pressure was on to complete his plans at the border. But US troops stationed in the region had been an obstacle to Turkish expansion in Syria.

On October 6, 2019, President Donald Trump abruptly pulled US troops from along the Turkey-Syria border, providing Erdoğan with an opportunity to seize his “safe zone.” On October 9, Turkey launched another attack in northeastern Syria. This invasion has recalibrated alliances in the Syrian war and added new uncertainty to the future of the region.

Watch the video above to learn more about Turkey’s ambitions in northern Syria and what effects Turkish military action is having on the region.

The best 80 cents I ever spent: A pen I use to write to my friends
Game of Thrones: Jon Snow and the Targaryen dragon rider theory, explained
5 winners and 4 losers from the last night of the Democratic convention
Protesters clash outside of Venezuela’s DC embassy over Guaidó-Maduro standoff
Trump saw his Tulsa rally as a chance to reset his reelection campaign. It did not go well.
Trump just congratulated Bill Barr for doing something he said was “totally illegal” not long ago