Why we need a more forgiving legal system 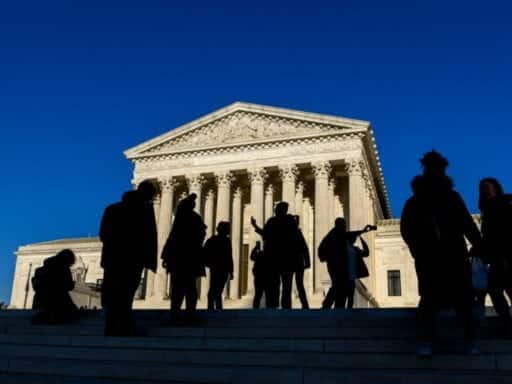 The American justice system’s approach to crime seems to be: Lock up as many people as possible. This is one of many reasons why we’re the most incarcerated country in the world.

Punishment has a role in any criminal justice process, but what if it was balanced with a desire to forgive? What if, instead of locking up as many people as possible, we prioritized letting go of grievances in order to create a better future for victims and perpetrators?

These ideas are central to a growing “restorative justice” movement in America, which seeks to bring together criminals, victims, and affected families as part of a process of dialogue and healing. Think of South Africa’s Truth and Reconciliation Commission as a model for this approach to justice.

A new book by Harvard law professor Martha Minow, titled When Should Law Forgive?, explores how the restorative justice philosophy might be scaled up and applied to the broader criminal justice system. Minow was dean of Harvard Law from 2009 to 2017 and is known for her work on constitutional law and human rights, especially the rights of racial and religious minorities.

Minow’s book is very much what the title implies: a plea for a justice system that emphasizes forgiveness over resentment, resolution over punishment. It’s not a call for abolishing punishment altogether, but it is an attempt to challenge some of our most basic assumptions about law and order.

What we have now, Minow argues, is a system that forgives some and not others, that favors the powerful over the marginal. And the only way to change it, she concludes, is to rethink the incentive structure that guides our entire criminal justice process.

I spoke to Minow about what that change might look like, whether it’s compatible with the American philosophy of justice, and why some people have reservations about abandoning the status quo.

The law, as you point out in the book, already forgives, but it’s very selective about when and who it forgives. Who gets forgiven now and why?

One of the central reasons to write this book is that many of the inequalities reflected in the distribution of power in this country help explain who gets forgiven and who doesn’t, particularly when there’s discretion that’s given either to a judge or to some other law enforcement official, like a police officer or a prosecutor.

When there’s discretion, then the biases of the individual come into play. One of my favorite cartoons shows a judge with a big bushy mustache and a large nose looking down from the bench at someone with the exact same mustache and nose saying obviously not guilty.

Can you give me an example of a type of person or institution that receives forgiveness now?

Right now, for example, we have a bankruptcy code that allows a for-profit college or university to declare bankruptcy but does not allow the students who took out loans to go there to declare bankruptcy. That reflects a political judgement about who or what can be forgiven. And it’s an expression of who has the power to lobby in this country, of who has the power to influence legislation.

We should be critical of these sorts of imbalances and fight for a system that extends the same sense of charity to less-powerful individuals and institutions.

What are some crimes right now for which there is no mechanism of forgiveness but you think there should be?

America is the most incarcerating country on the planet, and one consequence of that is the presence of fines and fees that are layered on top of people who are convicted of a crime. Many systems actually impose on the criminal defendant the cost of a probation officer or the cost of monitoring anklets with which they’re discharged, and the fines and fees accumulate.

These are often people without a lot of resources and there’s no forgiveness mechanism and therefore they can face even more incarceration for nonpayment. I think that’s an area where absolutely we should have mechanisms of forgiveness. Although there’s some efforts now to do just this, it’s not nearly enough.

Who would you say gains the most from a more forgiving legal system?

Not to be too simplistic, but I think we all do. In an interpersonal context, the one who forgives often gains as much if not more than the one who was forgiven. To let go of a grievance is to be freed in many ways.

More transparency and a more forgiving and pragmatic approach to crime also benefits the entire community because it constrains law enforcement and prevents the needless break-up of families, which is what incarceration does.

There’s another prosecutor problem, though, which you discuss in the book and which New York Times legal reporter Emily Bazelon has written about. We have a significant number of overzealous prosecutors, people who are benefiting politically from from locking up as many people as possible. How do we address that?

The emergence of progressive prosecutors is encouraging. It’s part of a broader movement to support and demand the election of people who are very clear about their intention to be less punitive and to pursue alternative models like restorative justice.

Another technique, of course, is to not have elected prosecutors at all, which is flawed for countless reasons. We can also develop ways to measure and reward other indicators of success besides how many people did you lock up. For example, we should pay more attention to how many people end up falling back into the criminal justice system after their initial contact with it.

If prosecutors are just tossing people in jail who continue to commit crimes after serving time, well, that’s obviously bad. But that’s just not part of the incentive structure right now.

Do you worry that more forgiveness means prioritizing the interests of perpetrators over the needs of victims?

I certainly do. And as much as I criticize mass incarceration, I do believe that we need vigorous law enforcement, and often the people most victimized by crime are the most disadvantaged. They’re poor people, people of color, people who are most likely to be targeted by violence. So while we need to talk about fairness, there are definitely dangers in taking the concerns of perpetrators too far. At the same time, we can’t let that concern get in the way of thinking more broadly about how to construct a more just, balanced, and forgiving system.

Some people have raised concerns that there’s an imbalance in terms of our expectations about who should forgive and that simply calling for more forgiveness risks normalizing certain forms of oppression or violence. How do you respond to this?

These are very important objections and I don’t think it’s accidental or unique to our society that people with relatively less power are either more likely to be expected to forgive than people with more power.

People of color and women in particular, at least in our society, have developed more muscles when it comes to forgiveness, even when they may be more often on the receiving end of harms. We see this now with the Me Too movement where very often someone who’s been identified as engaging in sexual assault or sexual harassment then expects their victims to forgive, and that’s often an expression simply of the power that they had in the first place.

I don’t think the problem here is forgiveness, though. Forgiveness is a resource every human being has and indeed every religion, every major moral philosophy, and every society has tried to cultivate. The real problem, as you suggested, is the unequal expectations around who should forgive and when.

The idea of forgiveness seems at odds with our whole philosophy of justice in this country. Do we need a fundamental shift in how we think about justice and law?

Every law student learns that there are multiple purposes of the criminal justice system. Deterrence of crime is one, incapacitation of people who are dangerous is another, but so is retribution and finally rehabilitation. Those are the four classic goals.

Since most of our system operates by plea bargain, much of it’s not even public. Prosecutors often work by stacking up as many charges as possible so that people will plead to something and then using that as leverage to press them into some admission of guilt and then some kind of punishment.

So how does that feed back into a deterrent system? It’s not clear. I think we’ve swung way out of balance from the goals that the system itself is supposed to have.

I think that we can learn some from other systems. I’m very encouraged when I hear that there are delegations from a city in the Midwest going to Norway or Finland to learn about how they engage in more restorative practices. There are increasing experiments in this country. The District of Columbia has decided to use restorative practices for its juvenile justice docket. I think there are a lot of people from a lot of different walks of life, different political persuasions, who are saying, “There’s something very broken here and we can change.”

Let’s say we did shift to a more forgiving legal system, are there any trade-offs that concern you? Is there something our current system does well that we might lose if we made this change?

But are there risks? Of course. One danger is that introducing more forgiveness into the system could further jeopardize the principle of equality under the law if it’s not applied fairly. If we don’t eliminate the imbalances we were talking about earlier, then more forgiveness could easily deepen the inequalities that already exist.

So, above all, we have to ensure that the benefits of a more forgiving system extend to everyone and not simply to the most powerful forces in the country. If we can do that, the country as a whole will be better.

The next president can force the financial sector to take climate change seriously
5 people on what it feels like to have Covid-19
Muslims love Jesus, too: 6 things you didn’t know about Jesus in Islam
Why the era of Peak TV is the era of the disappointing second season
Syria has confirmed its first cases of coronavirus. An outbreak there would be hell.
One of Peter Thiel’s closest aides might run for the US Senate