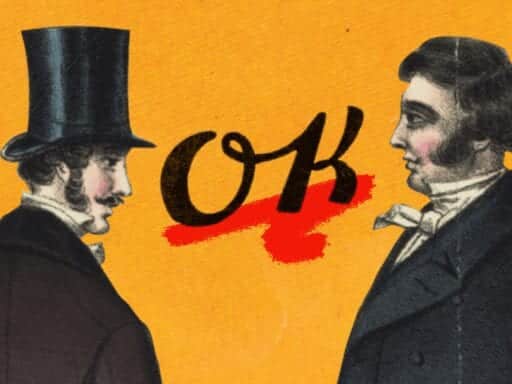 How a cheesy joke from the 1830s became one of the most widely spoken words in the world.

OK (or okay, ok, or k) might just be the most widely spoken word in the world. We use it so often, we barely notice it’s there: It’s in our speech, our writing, and even our computers. It feels like it’s been around forever, but it actually dates back to an obscure language fad in the 1830s where people facetiously misspelled abbreviations.

Young Boston intellectuals in the early 1800s used a humorous code of abbreviated phrases, like “KC,” or “knuff ced”; “KY,” “know yuse”; and “OW,” “oll wright.” And while most of them eventually fell out of fashion, one abbreviation persisted: “OK,” or “oll korrect.”

All correct, a cousin of all right, was a common 19th-century affirmative that indicated everything was in order. Thanks to a series of lucky breaks, its jokey abbreviation, “OK” survived — and even ended up being (arguably) the first word spoken on the moon.