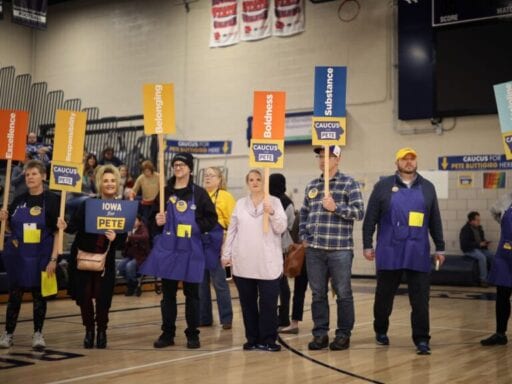 Share
Loading...
Supporters of Democratic presidential candidate Pete Buttigieg prepare to caucus for him at a gym in Des Moines, Iowa, on February 3, 2020. | Chip Somodevilla/Getty Images

Don’t fall for conspiracy theories about the Iowa caucus results.

We still don’t know who won the Democratic Iowa caucuses, largely due to technical issues with an app that precincts were supposed to use to report their results. The official results are now supposed to come out sometime Tuesday.

In the meantime, the delay — and concerns about the technical issues — has already begun to erode trust in the results on social media. Some people are even posting full-blown conspiracy theories, typically claiming, with no evidence whatsoever, that the Iowa Democratic Party is altering the results because they show Sen. Bernie Sanders, a candidate disfavored by the establishment, to be the night’s winner.

But as several journalists and analysts pointed out on Twitter, there is a solid paper trail for the results. In each of the precincts, the caucus leaders collected “preference cards” from attendees, showing which candidate each participant favored. These exist primarily in case a recount is requested, but they also provide a backstop for any technical reporting issues, like those we’ve seen.

“The results of this Caucus, while delayed & a mess will actually be the most reliable we’ve EVER had from the D version of the IA Caucus bc it had a highly regulated paper trail so I’m not sure why @Morning_Joe & @WillieGeist panel keeps delegitimizing the actual results,” election forecaster Rachel Bitecofer tweeted.

Reporter Sam Stein went further: “I get why conspiracy theories are flourishing now. But people should get a grip. There are paper ballots. The caucuses happen OUT IN THE OPEN FOR EVERYONE TO SEE. And each campaign has internal data to check if things are messy. There isn’t a wizard behind the curtain here.”

Two examples of the campaigns’ internal data have already been made public: Sanders and former South Bend, Indiana, Mayor Pete Buttigieg released preliminary results, showing each of the candidates did well. Sanders’s numbers cover all the candidates and 40 percent of precincts — putting Sanders in first, Buttigieg in second, Sen. Elizabeth Warren in third, and former Vice President Joe Biden in fourth. Buttigieg’s tally only provides results for him, but they’re broken down precinct by precinct, covering an estimated 75 percent of precincts.

In short, pretty comprehensive data exists — and the Iowa Democratic Party would have a lot of explaining to do if the official results differed too much from what the campaigns found. Coupled with the paper trail, that provides some assurances that the final tally, whatever it may be, really should be trusted.

Tenants sounded the alarm on facial recognition in their buildings. Lawmakers are listening.
A champion of the unplugged, earth-conscious life, Wendell Berry is still ahead of us
How long will essentials like toilet paper be hard to get? It depends.
Why Nevada caucuses are sometimes decided by drawing a card
There’s something strange about TikTok recommendations
Photos: What China’s quarantine to stop the Wuhan coronavirus looks like