Why you should give a shit about NATO 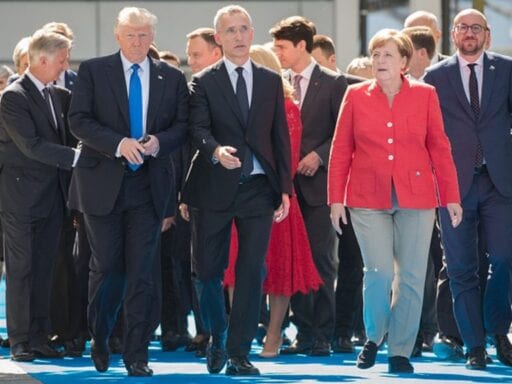 President Donald Trump is in Brussels this week for a critical NATO summit, where he and 28 US allies will discuss threats to European security.

The meeting comes a month after Trump sent letters to leaders of several NATO countries — including Canada, Belgium, Germany, and Norway — condemning them for not paying their fair share of defense spending.

NATO, or the North Atlantic Treaty Organization, is a military alliance between the United States, Canada, and several European countries. It was signed in 1949 in an effort to contain Soviet expansionism after World War II. The United States currently pays 22 percent of NATO’s total costs, which in 2017 amounted to $618 billion.

For at least two years, Trump has questioned the value of NATO. At a March 2016 meeting with the Washington Post editorial board he said, “NATO was set up at a different time” and it’s “costing us a fortune.” On Tuesday morning he echoed this sentiment in a tweet about how “unfair” the NATO arrangement is for the United States.

Does Trump have a point? What purpose does a 1949 defense treaty serve today? Is it still worth the price we pay to keep it going?

To answer these questions, I reached out to Ivo Daalder, a former US ambassador to NATO from 2009 to 2013 and now the president of the Chicago Council on Global Affairs. We talked about NATO’s role today, why the typical US taxpayer ought to care about the alliance, and what the world might look like without it.

A lightly edited transcript of our conversation follows below:

What was the original purpose of NATO?

The other reason was that by 1949, it was clear that the Soviet Union might pose a threat to the security, if not the independence, of European countries decimated by WWII. The US, therefore, if it wanted to prevent the Soviet Union from dominating the European continent, had to provide a visible security guarantee to those countries.

Why does NATO matter in the world of 2018, a world in which the Soviet Union no longer exists?

Russia, although it’s not the Soviet Union, continues to pursue a policy of trying to undermine the unity of not only the transatlantic alliance but also Europe more generally — and is engaged in active measures to undermine that unity. NATO is the best and strongest counter to Russia’s attempts to break NATO apart by interfering in the domestic political systems of its member countries or, as it did in Ukraine, physically invading them.

The second reason is that a Europe in which the US is not engaged is a Europe that is likely to be unstable. That’s as true today as it was in 1949. The investment that the US has made to ensure that Europe is peaceful remains a much cheaper investment than if we allowed it to descend into war, in which case we’d inevitably get dragged into the conflict.

So is that the argument you’d make to a typical US taxpayer who wants to know why he or she should care about what Russia does in the Balkans, or about what is happening in Western Europe?

Well, the European Union is our No. 1 trading partner and the No. 1 military partner of the US. Our European allies are with us in the Middle East where we’re dealing with ISIS and other threats. They’re with us in Afghanistan and Iraq. They’re the largest investor in our country and therefore they help create jobs. Europe is also the largest market for our goods. As a result of all this, we have a fundamental interest in peace and prosperity in Europe.

Does Trump have a point when he criticizes other NATO nations for not paying their fair share? Does NATO have a free-rider problem?

Yes, he has a point. NATO does have a free-rider problem that is becoming less of a problem but is still there. For a whole host of historical reasons, Europeans invest less in defense than the US, in part because we have a global security role and the US is seen as a country that is committed to the defense of Europe. That doesn’t mean Europe doesn’t spend money on defense. It does, and in fact the Europeans are currently spending more than any other combination of countries around the world.

What would happen if NATO was dissolved over night? How different would the world look in the short and medium term?

Individual nations in Europe, along with the US, would turn inward and try to figure out a way to provide for their own security without cooperating with other countries. And in a world in which everyone is looking out for themselves and no longer cooperating, suspicions, and fears will go up, which will lead to more defensive measures and perhaps even conflict. So it would create a much more unstable situation overall.

Could the US sustain its relationships with European powers if it led the effort to scrap NATO?

NATO, without the US, is not a viable alliance. The reality is that the US, both politically and militarily, forms the fundamental core of the alliance. If you take the US military out of NATO, you’re left with a shell of an infrastructure and a shell of a command structure. And if you take the US politically out of NATO, it’s highly unlikely that you’d be able to sustain the alliance given the massive role the US plays in it. So it’s hard to see how scrapping NATO wouldn’t severely damage our partnerships with European nations.

Is there a strategic alternative to NATO that could serve the same ends but at less cost for the US and the world?

The price that the US pays to NATO is relatively small. In fact, if NATO didn’t exist, we’d have to spend more on defense because NATO European countries are paying for US bases, paying to host US troops, and we’d have to pay for much of this ourselves without NATO. We’d have to move thousands of troops back to the US and spend billions of dollars building new bases and new facilities to house them in the US. So it would be vastly more expensive for the US to maintain the military capability it has today without NATO.

More importantly, much of our military spending is not allocated to defend Europe. It’s to maintain a global presence, to maintain the freedom of the seas, to have a presence in the Middle East and Asia and other parts of the world. This benefits global security but isn’t directly linked to European defense. So this idea that the US military spending is all about NATO or Europe is just wrong.

At the end of the day, NATO provides a support structure that is beneficial to the US and would be more costly to replace.

Freelance journalists are mad about a new California law. Here’s what’s missing from the debate.
The confusing and vague federal guidelines for states to reopen, explained
New York’s governor just took another step toward marijuana legalization
The essential worker revolution of 2020 will not wait
An outbreak of acute flaccid myelitis, the polio-like illness, is affecting kids
How the air travel industry is scrambling to convince people to fly