Wildfires are burning around the world. The most alarming is in the Amazon rainforest. 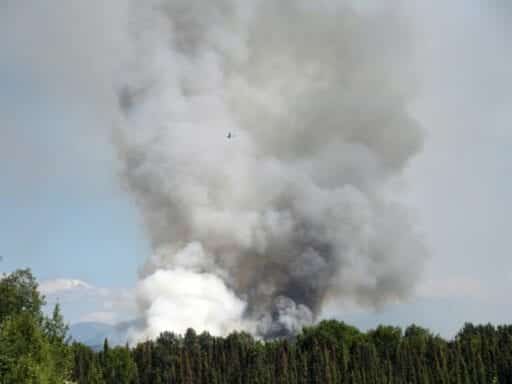 Share
Loading...
A plane passes by as smoke rises from a wildfire on July 3, 2019 south of Talkeetna, Alaska near the George Parks Highway. New fires ignited in Alaska over the weekend. | Lance King/Getty Images

Record heat, drought, and deforestation are contributing to wildfire risk.

Major wildfires are burning all over the world right now.

More than 21,000 square miles of forest have gone up in flames in Siberia this month, putting Russia on track for its worst year on record for wildfires. The smoke from these blazes shrouded large parts of the country, including major cities like Novosibirsk, and has crossed the Pacific Ocean into the United States.

On Monday, a wildfire in the Canary Islands forced more than 8,000 people to flee. Over the weekend, new fires ignited in Alaska, extending what’s already been an unusually long fire season for the state. Last week, Denmark dispatched firefighters to Greenland combat a wildfire approaching inhabited areas. If not extinguished, officials are worried the blaze would burn through the winter, further driving up the already massive ice melt Greenland has experienced this year amid record heat.

California, which suffered its most destructive wildfire season on record in 2018, is having a much calmer year by comparison, although the potential for a major fire remains.

But perhaps even more alarming are the wildfires in the Amazon rainforest, the world’s largest tropical forest. It’s an area that almost never burns on its own, yet the blazes have grown so intense that they blacked out the sky above São Paulo, Brazil’s largest city, on Monday. The state of Amazonas has declared an emergency. The #PrayforAmazonia tag has surged on social media.

Just a little alert to the world: the sky randomly turned dark today in São Paulo, and meteorologists believe it’s smoke from the fires burning *thousands* of kilometers away, in Rondônia or Paraguay. Imagine how much has to be burning to create that much smoke(!). SOS pic.twitter.com/P1DrCzQO6x

Many of these fires stem from unprecedented warmth and dryness across many parts of the world this year. And in the case of the Amazon, they are an unmistakable sign of how humans are radically reshaping the planet.

Conditions were ripe for major fires this year

The National Oceanic and Atmospheric Administration reported last week that this past July was the hottest July on record. The next five hottest Julys were all in the past five years.

This is not just for the northern hemisphere, where it’s summer right now, but for the whole world. The average global temperature last month was 1.71 degrees Fahrenheit above the 20th century average.

It may not seem like much, but remember that this is an average, which can obscure the extremes. And there were plenty of extremes last month.

So it’s not too surprising that many of the areas burning right now experienced extreme heat last month: Siberia, Alaska, the Canary Islands.

Alaska and the Canary Islands have also dealt with severe drought this year. In May, Alaska reported “extreme” drought conditions, the first time such a rating was recorded for the state, according to the US Drought Monitor.

These conditions have long been known to exacerbate wildfires. High heat and low moisture means vegetation dries out. But people play a critical role too.

Humans make wildfires worse. In the Amazon, humans are the underlying cause.

In many ecosystems, wildfires are a natural and essential phenomenon. They clear out decaying brush, restore nutrients to soil, and even help plants germinate. But in recent years, humans have made the destruction from wildfires worse at every step. Suppression of natural fires has allowed dry vegetation to accumulate. Human activity is changing the climate, which is forcing some forests to heat up and dry out. People are building ever closer to areas ready to ignite. And people end up igniting the majority of wildfires, whether through downed power lines, errant sparks, or arson.

But the Amazon rainforest, which remains drenched for much of the year, does not burn naturally. Instead, the fires are ignited by people. Farmers use slash-and-burn tactics to clear land for farming and pasture, though it’s illegal in Brazil this time of year due to fire risk.

Illegal logging operations in Brazil have also been known to start fires as a tactic to drive indigenous people off their land and to cover their tracks. The Amazon rainforest has experienced a record number of fires this year, with 72,843 reported so far.

“There is nothing abnormal about the climate this year or the rainfall in the Amazon region, which is just a little below average,” Alberto Setzer, a researcher at Brazil’s National Institute for Space Research (INPE), told Reuters. “The dry season creates the favorable conditions for the use and spread of fire, but starting a fire is the work of humans, either deliberately or by accident.”

From the other side of Earth, here’s the latest on the Amazonia fires

The source of the current wildfires in Brazil is not yet known, and the government in Brazil is not all that inclined to find out. INPE’s director, Ricardo Galvão, was ousted from his job earlier this month after his agency reported an 88 percent increase in the deforestation rate in the Amazon.

This deforestation stands to have major regional consequences. Without trees in place to anchor the soil and retain moisture, the underlying vegetation can dry out, making it easier to burn. Trees also evaporate a huge volume of water and emit chemicals that make it condense, helping the rainforest generate its own rainfall.

Right now, the Amazon has been deforested by 15 percent or more from its primeval state and scientists are worried that if it reaches 25 percent, there won’t be enough trees cycling water through the forest. The region will cross a tipping point and eventually degrade into savanna.

This has huge consequences for the rest of the world as well. The Amazon rainforest produces huge amounts of oxygen. Its vegetation holds on to billions of metric tons of carbon that could oxidize into heat-trapping gases.

The Intergovernmental Panel on Climate Change earlier this month reported that conserving areas like the Amazon rainforest will be integral to mitigating climate change. But with the current pace of wildfires and deforestation, the world is rapidly galloping in the wrong direction.