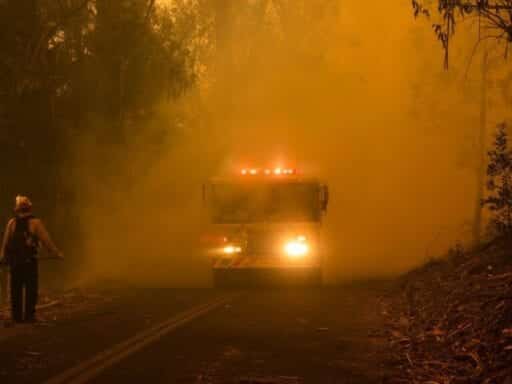 Share
Loading...
Smoke from wildfires like the Kincade Fire in Sonoma County have led to poor air quality in California cities this week. | Philip Pacheco/AFP/Getty Images

Millions of Californians are smelling smoke after a new round of wildfires ignited this week, bringing with it another round of power blackouts, evacuations, and air quality alerts.

In Southern California, officials issued smoke and dust advisories due to several wildfires burning in the region, like the 600-acre Getty Fire that sent smoke over Los Angeles.

Meanwhile, the Kincade Fire burning in the northern part of the state has sent a plume of smoke over the San Francisco Bay Area, triggering a Spare the Air alert for the region to encourage residents to drive less to reduce pollution. Oakland, California, reported “Unhealthy” air quality on Monday, a threshold the Environmental Protection Agency defines as where everyone starts to experience detrimental health effects.

The California cities of Windsor, Visalia, and Fresno all reached “Very Unhealthy” levels of pollution on Monday, which could lead to “more serious health effects,” according to the EPA. However, much of the pollution in these cities is due to high winds kicking up dust in hot, dry weather rather than smoke.

The San Francisco Chronicle has put together a great interactive map showing the locations of the current round of fires and where air quality has reached dangerous levels. But some residents noticed that the ongoing public safety power shutoffs have led some air quality detectors to go offline, which means we may not know the complete picture.

At least three people have died in California’s wildfires this month. But their most dangerous effects are still lurking. The smoke from these fires is a serious public health concern and stands to be one of the most devastating impacts of wildfires. Millions of people, far from the burning forests and chaparral, are at risk of breathing and heart difficulties. And with more devastating wildfires on the horizon, the threat is only growing.

Why smoke from wildfires is dangerous

According to the National Fire Protection Association, most fire deaths are caused by smoke inhalation, not burns. In the case of wildfires, soot and ash from flames can be spread more thinly than in a structure fire, but this plume spreads over a much wider area so more people are affected. And it can still accumulate to dangerous levels in some regions as smoke gets trapped by land features or gets held in place by weather conditions.

Smoke is the collection of solids, liquids, and gases emitted by combustion. Some of these compounds in smoke can be dangerous, but the biggest health threats come from the smallest particles often emitted within the smoke. Health officials pay close attention to one type known as PM2.5, particles that are 2.5 microns or less in diameter. PM2.5 can also come from dust.

When inhaled, PM2.5 travels deep into airways, leading to problems like asthma attacks and inflammation. Over time, PM2.5 contributes to elevated risks of cancer.

And it doesn’t take very much PM2.5 to cause problems, especially for the very young, the elderly, and people with existing health issues. The safe limit is usually pegged at 10 micrograms of PM2.5 per cubic meter. Adverse health effects start to emerge at concentrations above 37 micrograms per cubic meter, which is roughly the equivalent of smoking 1.6 cigarettes per day.

Breathing the air in Oakland on Monday, which reached an air quality index of 152, was the equivalent of smoking seven cigarettes in a day. In Fresno, the AQI reached 234.

Last year’s Camp Fire in Butte County proved to be the deadliest and most destructive fire in California’s history. It also shrouded Northern California is some of the worst air pollution in the world at the time, triggering a public health emergency. Sacramento reported air pollution getting so bad that the city reached an AQI of 316.

Because air quality is one of many factors that influences health, it’s difficult to tease out its impact in any individual illness, emergency room visit, or death. But in aggregate, health officials say air pollution one of the deadliest phenomena in the world.

The World Health Organization reports that air pollution kills 7 million people each year. A recent State of Global Air report from the Health Effects Institute found that PM2.5 alone contributed to 4.1 million deaths around the world in 2016. And researchers have found that the exacerbated health problems that result from poor air quality takes years off people’s lives in the most polluted areas.

As fire risks grow, so will the hazards of poor air quality

Humans are worsening several key factors that contribute to wildfire risk. One ingredient is the changing climate, which is strengthening conditions that allow major fires in some areas, like driving up temperatures that in turn cause vegetation to dry out, or changing rainfall patterns.

Another factor is that people are increasingly building closer to areas that can burn. This raises the likelihood of a fire starting as well as the amount of property at risk of destruction. It also increases the number of people that will breathe in dirty air when a fire ignites. So as populations grow and development continues to encroach on wilderness, the hazards from poor air quality will grow.

However, fires aren’t the only source of PM2.5. Combustion of all sorts, whether in boilers, engines, or power plants can produce particulates. The rise and fall of pollution from these sources, to some extent, can be linked to economic growth.

And there’s another critical factor at play in how this pollution affects health: regulations. Vox’s Dylan Matthews reported on a recent study that found that lax air quality regulations and weakened enforcement of environmental laws under President Trump led to 9,700 more deaths from air pollution in 2018 than air pollution caused in 2016.

Even controlling for the record-breaking fires in California, the effect held, showing that enforcing or not enforcing environmental laws has direct impacts on health. But while air quality regulations can reduce pollution from sources like factories, power plants, and cars, tougher pollution rules won’t do much to thwart PM2.5 from wildfires.

Reducing wildfires and the pollution they produce will instead require years of coordinated effort to reduce flammable vegetation in wilderness areas and to rethink urban planning so people aren’t building in fire-prone areas. It will also require upgrading power infrastructure to reduce the likelihood of igniting another blaze and deploying distributed renewable energy across microgrids to safely power remote areas.

In the meantime, the N95 air filter mask will remain a popular fashion accessory as raging infernos cast a larger pall over vast stretches of the country. However, health official caution that these masks may not be ideal for everyone facing dirty air, particularly those who already have difficulty breathing.

7 reasons Trump can’t make an immigration deal
In defense of Quibi
Vox Sentences: House gives Senate the USMCA for Christmas
Uber’s HR chief steps down after reportedly ignoring racial discrimination complaints
How do you put on a comedy show when laughter is a risk?
The case for capping all prison sentences at 20 years