Will Brett Kavanaugh turn out the Republican base in 2018? Republicans aren’t sure. 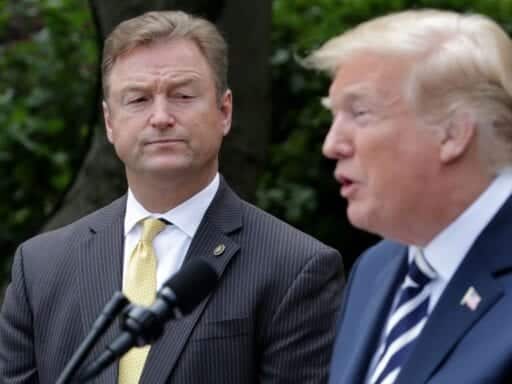 Remember when Dean Heller said a Supreme Court pick could save him in 2018?

Brett Kavanaugh’s Supreme Court nomination comes four months from a high-stakes midterm election. It’s increasingly looking like a fight around his confirmation will be unfolding within a month of Election Day.

In a year Democrats are energized to turn out to vote, and Republicans are fretting that an unpopular president and less-motivated base could loosen their grip on power in Congress, Kavanaugh is a welcomed win for Republicans — who hope he will be confirmed with bipartisan support.

But is Kavanaugh the kind of win that can stop a so-called “blue wave” election year?

Endangered Sen. Dean Heller certainly seemed to think so back in March, when he correctly predicted that Supreme Court Justice John Kennedy would retire, musing a Supreme Court nomination could motivate the Republican base — and possibly save his fraught reelection bid.

“Republicans are going to have an opportunity now to put another Supreme Court justice in place, which I’m hoping will get our base a little motivated because right now, they’re not very motivated,” Heller said during a private event, then, according to audio obtained by Politico. “But I think a new Supreme Court justice will get them motivated.”

But Republican senators are reluctant to repeat Heller’s thoughts this week.

“Don’t know, don’t know,” Sen. Jeff Flake (AZ), who is retiring rather than face the brutal 2018 election cycle, told Vox on Tuesday of the prospects of motivating Republican voters. “I think people will say it’s a strong pick.”

This was repeated by Sen. Lamar Alexander (TN), the chair of the Senate Republican Conference, who said, “we’ll see.” Sen. Roger Wicker (MS) said, “well, I’m not sure.”

Matt Mackowiak, a conservative political strategist, also wasn’t certain. “Generally, I don’t think the Supreme Court is all that important in midterms — it was more important in this presidential election because there was an understanding there would be a couple openings and Trump and Hillary Clinton had such different ideas on what a judge should be,” he said.

Sen. Cory Gardner (CO), who is the chair of the National Republican Senate Committee — the official campaign arm for Senate Republicans — alluded to the impact this Supreme Court vote will have on the 2018 midterms, but for Democrats.

“You’ve got red-state Democrats who are up for election this year that are going to be faced with some pretty significant challenges with this vote,” Gardner said. “I think it’s a hot potato that’s really going to affect people going into November.”

Trump’s promise to appoint conservative judges to the bench was crucial in 2016. It gained him the backing of many key Republicans, like Sen. Ted Cruz (R-TX) who reversed his disavowal of Trump into full-fledged support for this very reason.

And Trump has delivered. He has had more judicial vacancies to fill than any president in recent history and he has been filling them at a fast pace. Senate Majority Leader Mitch McConnell has prioritized the effort as well, even extending the Senate’s working period through August — when lawmakers typically go home for the month — to push through more judicial confirmations.

Even Never Trumpers, like Wisconsin’s conservative commentator Charlie Sykes, make the case that Trump’s success with his first Supreme Court nomination of Neil Gorsuch has given Republicans something to sell to voters.

“Walk through the litany of Trump outrage and disgust and slurs, and they’ll come back with ‘but Gorsuch — at least we got Gorsuch,’” Sykes told NBC.

But Republicans face a very clear obstacle in November: Their voters aren’t as excited about the midterm elections as Democrats are. According to a Pew Research Report, Democratic enthusiasm for the 2018 midterms is much higher than they were in 2014.

The timing of this Supreme Court nominee’s vote will likely be very close to Election Day. That’s not uncommon; the list of justices confirmed in a midterm election year includes Justices Antonin Scalia in 1986, Stephen Breyer in 1994, and Elena Kagan in 2010. In Scalia’s and Breyer’s cases, the minority party won back the majority in the elections.

Meanwhile, Democrats are mobilizing, too

Conservatives have mobilized voters to end what was perceived as a more liberal judiciary in the mid-20th century, for decades. Now Democrats want to flip the script, energizing the base around Kavanaugh’s appointment — and would likely be the most conservative Supreme Court in a generation.

The center of their focus is a new threat to undermine the ACA: a lawsuit arguing preexisting condition bans should be unconstitutional. The lawsuit, which Vox’s Dylan Scott reported on last month, was initially brought by conservative states. But the Trump administration recently signed on in another push to destroy Obamacare.

The Supreme Court has twice affirmed the legality of the Affordable Care Act. But this latest effort by the Trump administration makes it clear these lawsuits are not going away anytime soon.

It’s a two-pronged approach from activists, Nilsen writes: “First, get senators to oppose the nomination, and second, flip the Senate in the November midterms.”

In other words, while Republicans pressure red-state Democrats, 10 of whom are defending their seats in 2018, to break with their party, Democrats are going to elevate the ideological threat of a right-wing bench.

“The question is: Are Republicans going to be able to go on offense on the Supreme Court against Democrats in swing states?” Mackowiak said.

Democrats are adding in another factor: their own offense.

UK Parliament rejects leaving the EU without a Brexit deal
Trump’s stump speech for Ted Cruz included his seemingly fake middle-class tax cut
The obscure rule that is discouraging billionaires’ foundations from going big on coronavirus
Emmys 2020: The nominees for the best TV of the year
Elizabeth Warren says impeachment is more than just a “political inconvenience”
The 2000 election doesn’t justify Trump’s refusal to concede to Biden. Here’s why.