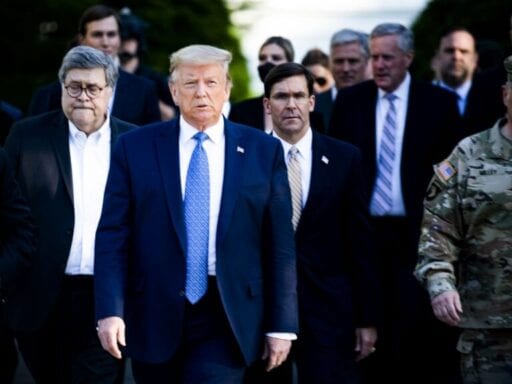 A law professor fears a meltdown this November.

Imagine that it’s November 3, 2020, and Joe Biden has just been declared the winner of the presidential election by all the major networks except for Fox News. It was a close, bitter race, but Biden appears to have won with just over 280 electoral votes.

Because Election Day took place in the middle of a second wave of coronavirus infections, turnout was historically low and a huge number of votes were cast via absentee ballot. While Biden is the presumptive winner, the electoral process was bumpy, with thousands of mail-in votes in closely fought states still waiting to be counted. Trump, naturally, refuses to concede and spends election night tweeting about how “fraudulent” the vote was.

We knew this would be coming; he’s been previewing this kind of response for a while now.

There is NO WAY (ZERO!) that Mail-In Ballots will be anything less than substantially fraudulent. Mail boxes will be robbed, ballots will be forged & even illegally printed out & fraudulently signed. The Governor of California is sending Ballots to millions of people, anyone…..

One day goes by, then a few more, and a month later Trump is still contesting the outcome, calling it “rigged” or a “Deep State plot” or whatever. Republicans, for the most part, are falling in line behind Trump. From that point forward, we’re officially in a constitutional crisis.

This is the starting point of a new book by Amherst College law professor Lawrence Douglas called Will He Go? Trump and the Looming Election Meltdown in 2020. According to Douglas, a scenario like the one above is entirely possible, maybe even probable. And if nothing else, we’ve learned in the Trump era that we have to take the tail risks seriously. Douglas’s book is an attempt to think through how we might deal with the constitutional chaos of an undecided — and perhaps undecidable — presidential election.

I spoke to Douglas by phone about why he thinks our constitutional system isn’t prepared for what might happen in November and why he’s not worried about a stolen election so much as an election without an accepted result. “If things go a certain way,” he told me, “there’s a Chernobyl-like defect built into our system of presidential elections that really could lead to a meltdown.”

What worries you most about the November election?

To say that we’re facing a perfect storm is clichéd, but it does strike me that there are a lot of things coming together that could spell for a chaotic election.

Foremost among them is the fact that we have a president of the United States who has pretty consistently and aggressively telegraphed his intention not to concede in the face of an electoral defeat, especially if that electoral defeat is of a very narrow margin. And it looks like it probably will be a narrow margin. In all likelihood, the 2020 election is going to turn on the results in probably the three swing states that determined the results in 2016: Michigan, Pennsylvania, and Wisconsin.

The other concern is that if we do fall into an electoral crisis and we start seeing the kinds of challenges to the results that we saw back in year 2000, during Bush v. Gore, then we could really see a meltdown because our contemporary political climate is so polarized. That’s what led me to start asking, what types of federal laws do we have in place? What kind of constitutional procedures do we have in place to right the ship?

And what I found is that they just don’t exist.

What does that mean, exactly? Are we racing toward a constitutional crisis?

What makes our situation particularly dangerous is it’s not simply the statements that come out of Trump. We’re pretty used to Trump making statements that leave us all gobsmacked at this point. What worries me is that if there are going to be any guardrails protecting us from his attacks on the electoral process, it would have to come from the Republican Party. And we’ve seen that Republican lawmakers simply are not prepared to hold this guy to account.

We saw that in the impeachment proceeding, where it was really astonishing that you have Mitt Romney as the only Republican voting in the Senate to remove the president. And it was only, what, eight years ago that Mitt Romney was the standard-bearer of the party in the national election.

If you’re right that the Republican Party isn’t going to stand up for the rule of law, where does that leave us legally and politically?

If you have a president who is really pushing the argument that fraud cost him the election, he really does have the opportunity to push things to Congress. And what I mean by that is that Congress is the body that ultimately tallies Electoral College votes.

It’s not inconceivable that you have states that submit competing electoral certificates. And I won’t go into the nitty-gritty about how that happens, but it can happen. And if that happens and you have a split Congress between the Senate Republicans and the House Democrats, there is basically no way to resolve the dispute.

Let’s say that happens and we enter January 2021 without a political consensus on who won the election. What then?

I’m not trying to be an alarmist here, but it’s possible to imagine, come January 20, that we don’t have a president. By the terms of the 20th Amendment, Trump ceases to be president at noon on January 20 and [Mike] Pence likewise ceases to be vice president.

At this point, by the terms of the presidential succession act of 1947, the speaker of the House, Nancy Pelosi, could become acting president, but only if she resigns her House seat. But what if Trump continues to insist that he has been reelected and is the rightful president? Imagine if, come January 20, Trump stages his own inauguration ceremony with Clarence Thomas issuing the oath of office.

Then we might have Nancy Pelosi and Trump both claiming to be the commander in chief. This is a world of hurt.

What about the Supreme Court?

I think a lot of people assume the Supreme Court would step in and end things before they got too chaotic. This is more or less what happened in 2000.

But it’s very misleading to think that it was the Supreme Court that settled the 2000 election. It really wasn’t the Supreme Court in the decision Bush v. Gore that ended things — it was Al Gore. Al Gore, for the good of the country, decided to accept the Supreme Court’s ruling. I’d say it’s impossible to imagine Trump doing anything like that.

Besides, if it did intervene, I’m not sure that Congress would abide by a court ruling. Because so many experts [here and here] say the Court really doesn’t have jurisdiction to resolve an electoral dispute once it hits Congress.

Let’s imagine that the election happens and Biden wins convincingly enough that the vast majority of the country, even most Republicans, accept the outcome. In that case, Trump — and a small wing of hardliners — may refuse to concede, but both parties basically accept the results.

What happens then? Would federal marshals have to go in and drag Trump out of the White House?

Here’s the thing: That’s not the scenario I’m worried about. If Trump loses decisively, I think his opportunities for creating mayhem will be dramatically curtailed.

This is going to be an election that is conducted under very unusual circumstances. There are going to be potentially chaotic scenes at polling stations, and god forbid there’s a fresh outbreak of Covid-19 in the fall. Then you’re also going to have millions of people voting by mail-in.

Why is that a problem?

Well, these mail-in ballots are not going to get counted by November 3. That gives someone like Trump space to create incredible chaos.

And so in this case, it’s entirely possible that Trump is trailing once all the votes are counted. But then he says, “Those votes are bogus. They shouldn’t be counted.” And if you look at the political profile of Michigan, again, you find this kind of perfect storm brewing, because the Republicans control the statehouse in Lansing. So let’s say they all support Trump, and they all say, “Yeah, we’re going to go with the Election Day results. We’re going to give our electoral votes all to Trump.”

Then we’ve got total chaos.

But the governor of Michigan is a Democrat, and my understanding is that it’s the governor, along with the secretary of state and the board of electors, who sends the electoral certificate to Congress.

“I’m not trying to be an alarmist here, but it’s possible to imagine, come January 20, that we don’t have a president”

So your main worry is not that the election will be stolen so much as we’ll be left without a result?

The situation you’re describing is almost unthinkable: We have an election and there’s simply no binding result.

Again, I’m not trying to be an alarmist.

This is pretty damn alarming, Lawrence.

Look, one of the main points of my book was to say, “Hello, people. If things go a certain way, there’s a Chernobyl-like defect built into our system of presidential elections that really could lead to a meltdown.”

Are there any precedents for this?

We came very close to having something like this happen back in 1876. There was this Hayes-Tilden election, in which three separate states submitted competing electoral certificates to Congress. Congress was likewise divided between House Democrats and Senate Republicans, and they couldn’t figure anything out. It was a total stalemate. They eventually jerry-rigged a solution, but that solution only worked because Samuel Tilden, the Democratic candidate, agreed to concede.

This is an astonishing hole in our Constitution. It’s another example of our reliance on norms, not laws or institutions, to keep things humming along.

It’s such a great point. When I was researching the book, I was asking myself, well, what does the Constitution and the federal law do in order to secure the peaceful transition of power? And one of the things that I realized is they don’t secure the peaceful succession of power. They presuppose it. They assume that it’s going to happen. So if it doesn’t happen, well, no one knows …

Now, on to another worry: Could the election be postponed?

No, I don’t think so. The president can’t do that, because Election Day is set by federal law. You could have Congress change the election, but that would require bicameral support and bipartisan support, and that seems highly unlikely.

It feels almost pointless to ask this question, but I’ll do it anyway: Are you confident that our constitutional system can handle what’s potentially coming in November?