Will the government shutdown again before the midterms? Ask Trump. 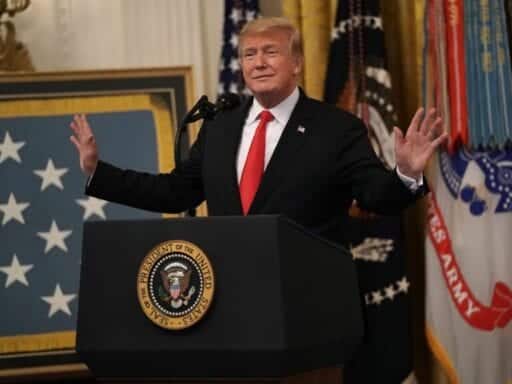 Congress is racing to keep the government open — and Trump is threatening to upend it all.

The government is running out of money — and fast.

Congress has to fund the government by midnight on September 30 or the federal government will shut down. The House and Senate only have one week’s worth of working days before the deadline.

The government has already shut down twice under a Republican-controlled government — once in January and again, briefly, in February — but this deadline comes less than two months before the highly anticipated midterm Election Day, where Democrats are looking to flip control of the House, and possibly even the Senate.

If you ask congressional Republicans, they say they’ll make the September 30 deadline, even if it’s close. The plan to fund 87 percent of the government — or pass nine of the 12 appropriations bills that fully make up the government’s budget, and then pass stop-gap funding measures to push negotiations over the more contentious funding battles — like over Trump’s border wall — until after the midterm elections.

The Senate has passed all nine appropriations bills, but the House and Senate only agree on three. Negotiations continue on the other six. It’s not uncommon for spending negotiations to go until the last minute. But even if Congress manages to get its act together on time, Trump has already threatened to veto the spending bills altogether and shut down the government on his own.

Most recently, he said he thinks government shutdowns are a “great political issue” (a risky assertion, not based in any hard evidence). He’s also made aggressive immigration demands on everything from an overhaul of the legal immigration system to fully funding the border wall.

Congress is doing nothing to meet Trump’s policy demands. Instead, Republican leaders have been pleading with Trump to sign whatever spending bill they put on his desk, arguing a shutdown could hurt their chances in November even more.

Whether Congress can get Trump to go along with the plan for a drama-free October, remains to be seen.

We have a “minibus” — some progress on spending negotiations

This week, Congress unveiled what they are calling a “minibus” — a small package of spending bills (a mini omnibus bill) that would fund the Energy Department, the Department of Veterans Affairs, and the legislative branch of government.

It includes $98.1 billion for MilItary Construction and the Veteran’s Department, including for more mental health services and $921 million designated as war-related spending; $44.6 billion for energy and water programs, including flood-control programs; and $4.8 billion to run the legislative branch, which will fund pay for congressional interns and continue a freeze on lawmakers’ pay.

The first of three planned minibuses that would fund nine of 12 appropriations branches, this was considered to be the least controversial of the spending packages. It’s expected to be on Trump’s desk by the end of the week.

The second planned minibus would fund the Defense Department, Labor Department and Health and Human Services — a whopping 63 percent of the federal government’s discretionary spending. The third is supposed to address the Interior, Agriculture, Transportation and Housing and Urban Development Departments, as well as the Financial Services branch, which is looking increasingly unlikely to get done in time.

That will leave negotiations for federal agencies like Department of Homeland Security and Justice Department until after the elections, and force Congress to pass what they call a “continuing resolution,” or CR, which keeps the government open at current funding levels for a short period of time.

So far that plan is on a tight schedule — and an incoming hurricane threatens to upend the voting schedule even more. But if Congress gets it done, it will be the first time since 1997 that Congress has managed to pass more than four appropriations bills before the end of September.

Spending fights are often political as both parties try to tie in long-standing policy demands — or “poison pills” — like defunding Planned Parenthood and sanctuary cities into the final spending package.

Among the most contentious areas of the spending fight involve some of Trump’s biggest pet issues, like immigration. Trump, who nearly vetoed a spending package earlier this year because it didn’t fund his border wall, has already threatened to do so again with even more sweeping hardline immigration demands, including ending “catch and release” of migrants and the diversity visa lottery.

But Congress is pushing off all of these fights.

The House and Senate aren’t even negotiating the budget for the Department of Homeland Security right now, which is where wall funding and border security funding would be allocated. A Senate version of the Homeland Security appropriations bill passed earlier this summer includes $1.6 billion for the border wall, while the House passed a version with $5 billion.

Is the government actually going to shut down? Ask Trump.

Trump appears to understand that concern from within his own party, but he doesn’t seem to be letting that get in the way of his own political ambitions.

“There are a lot of politicians that I like and respect and are with me all the way that would rather not do it because they have races, they’re doing well, they’re up,” Trump said last Friday. “The way they look at it, might be good, might be bad.”

In late August, the president said he “most likely” wouldn’t shut down the government over a lack of border wall funding during a live Fox News interview at a rally in Montana, precisely because he feared it could hurt Republicans’ electoral chances in 2018.

“If it was up to me, I’d shut down [the] government over border security,” Trump told Fox News host Pete Hegseth. “And I guess when you get right down to it, it is up to me, but I don’t want to do anything to hurt us or potentially hurt us.”

Border security and wall funding has been Trump’s signature issues, and he has realized that the threat of a government shutdown is one way to motivate Congress to act on it.

But this time, avoiding major political infighting is proving to be a bigger motivator for lawmakers, who have shown no interest in going through yet another immigration fight.

It looks like Congress is well on its way to passing as many spending bills at it possibly can before September and putting in stop-gap spending measures to keep the rest of the government open until after the midterm elections.

In these final months before the midterm elections, the name of the game is no drama. But unfortunately for Republicans, Trump likes drama.

Trump’s fear-stoking immigration policy, in two White House retweets
Big Tech is “scary” because it wants to be the solution to everything, New York City Mayor Bill de B...
Democrats should talk about child care costs in a broader way
Odessa and Midland, Texas shootings: what we know
New national polls are disastrous for Trump — and state polls aren’t much better
Brit Bennett on publishing The Vanishing Half during the George Floyd protests