Will Trump be impeached and removed from office, or face the 25th Amendment? 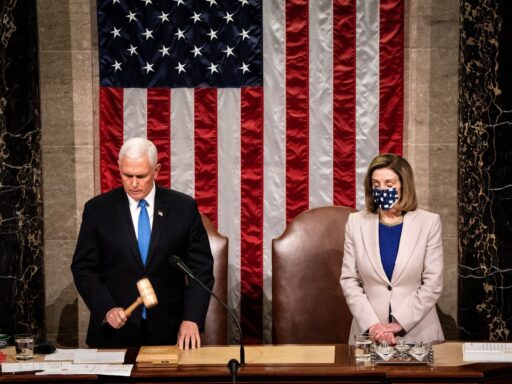 Politicians’ attention is increasingly turning to the question of whether action should be taken against President Donald Trump before his term in office expires on January 20 after Wednesday’s presidentially incited chaos surrounding Joe Biden’s win formally getting recognized by Congress.

Soon-to-be Senate Majority Leader Chuck Schumer called Thursday for officials to “immediately invoke” the 25th Amendment, deeming Trump “unable” to serve and stripping him of his powers. If that doesn’t happen, he said, “Congress should reconvene to impeach the president.”

Soon afterward, Speaker Nancy Pelosi, who has the power to start the impeachment process, somewhat agreed — she said that unless the 25th Amendment is invoked, “the Congress may be prepared to move forward with impeachment.” That’s not a concrete commitment, and currently the House has no plans to reconvene until after Biden’s inauguration — but plans can change.

To have any practical effect, either of these actions against Trump would need to win the support of key Republicans. In the case of the 25th Amendment, Vice President Mike Pence and a majority of Trump’s Cabinet would have to make the call. And for impeachment, at least 18 Republican senators would have to vote to remove Trump from office.

Neither of those currently appears likely.

Wednesday’s events did reportedly spur chatter among Republican officials about invoking the 25th Amendment. But on Thursday, Secretary of Transportation Elaine Chao announced she would resign, saying she was “deeply troubled” by the storming of the Capitol and Trump’s role in it. Once this resignation is effective, it means Chao would no longer be able to have a role in a 25th Amendment effort.

As for impeachment, House Democrats have the power to impeach Trump (again) and they may well do so. But all that does is kick the matter to the Senate. And as far as removing Trump from office, the only Senate Republican who voted to do so last time — Sen. Mitt Romney (R-UT) — indicated that he doesn’t support doing so now, suggesting, “I think we’ve got to just hold our breath” until Trump’s term is up.

The wild card here would be if Trump’s erratic, lawless behavior escalates further. Leading Republicans have made clear they support the transition of power to Biden. Trump, in an early Thursday morning statement, promised to abide by that. But he could change his mind. And if he does, both the 25th Amendment option and impeachment-and-removal are potential responses.

”If something else happens, all options would be on the table,” Sen. Lindsey Graham (R-SC) said Thursday.

The reason Schumer said Congress might have to “reconvene” is because after the stressful day and late night counting the electoral votes, both the House and Senate had planned not to come back into session until the very end of Trump’s presidency.

So, it appears, the initial response planned by congressional leaders was indeed to do nothing, to wait things out over the next 13 days and hope for the best.

But many in both parties were outraged that Trump’s incitement of a mob to storm the Capitol would result in no consequences for him, and some Democrats began calling for the strongest congressional response to a president abusing his power: impeachment.

By midday Thursday, both Schumer and Pelosi were at least rhetorically on board, with Pelosi citing “the overwhelming sentiment of my caucus” as a reason. Yet both framed impeachment as a fallback plan. Their true hope, they said, was that Vice President Pence and the Cabinet would invoke the 25th Amendment and strip Trump of his powers.

However, neither Schumer nor Pelosi laid out a timetable by which Pence and the Cabinet had to take this action. And Pelosi did not concretely promise to pursue impeachment even if they took no action — she said the House “may be prepared to move forward with impeachment.”

So it’s not yet clear whether Pelosi will pursue a second impeachment of Trump in the 13 days remaining before Biden’s inauguration. If she and her caucus truly wanted to, they certainly could.

But impeachment itself has no practical consequence, other than kicking the matter to the Senate. As far as when and how a trial would be held, Mitch McConnell is still majority leader until Georgia’s special election results are certified later this month, meaning he and Republicans would call the shots. And while Republican senators did overwhelmingly reject Trump’s attempt to steal the election in this week’s votes, it’s unlikely that they would go so far as voting to remove him from office.

Perhaps that would change if Trump’s behavior devolves even further into lawlessness, but even Romney wasn’t enthusiastic about the possibility when questioned Wednesday. “I think time is a little short for that,” he told HuffPost’s Igor Bobic, referring to impeachment.

It’s also possible that impeachment for the currently known facts could spur wavering Republicans to rally back to Trump’s side and defend him as his term ends. Though some leading Republicans are more critical of Trump than at any time in his presidency, Trump’s support in the party obviously has not evaporated overnight — after the storming of the Capitol, more than half of House Republicans voted to throw out the results in states Biden won.

As I wrote Wednesday, the key decision-makers in invoking Section 4 of the 25th Amendment — which would strip Trump of his powers and make Pence acting president — are Pence and the Trump Administration Cabinet Secretaries.

Theoretically, the 25th Amendment has some advantages over impeachment. It only requires sign-off from a handful of people and goes into effect immediately, if Pence and a majority of secretaries declare that Trump is “unable” to exercise the powers and duties of his office, and transmit that declaration to congressional leaders. Trump can dispute the decision, but if Pence and the secretaries reiterate their judgment, Congress would have 21 days to settle the matter — more days than are remaining in Trump’s term.

Of course, that’s how it’s legally supposed to work — but Section 4 has never actually been invoked, so the practical implementation could be much messier, and could feel a lot like a coup (particularly to people like, say, those Trump supporters who stormed the Capitol).

This is a failsafe that remains available should Trump escalate the situation further. But under current circumstances, Pence and Republican Cabinet Secretaries seem unlikely to go down this road. And Sen. Lindsey Graham (R-SC) said Thursday that he doesn’t think the 25th Amendment would be “appropriate,” in a sign of where Republican opinion is leaning — though he also said that “all options would be on the table” should something else happen.

So after Wednesday’s chaos, this appears to be where things stand: leading Republicans think the country has survived nearly 4 years of Trump’s presidency, and they’re going to hope to get through 13 more days.

Former Kentucky Gov. Matt Bevin’s 428 pardons are upsetting both Democrats and Republicans
What the remaining swing states would look like as a TV show
Why Trump taking credit for the Covid-19 vaccines could be a good thing
The racial pessimism of Clarence Thomas
Why social conservatives are disappointed that Trump picked Brett Kavanaugh
All Broadway shows will close for a month due to coronavirus