Will young women of color shape the Democratic Party? 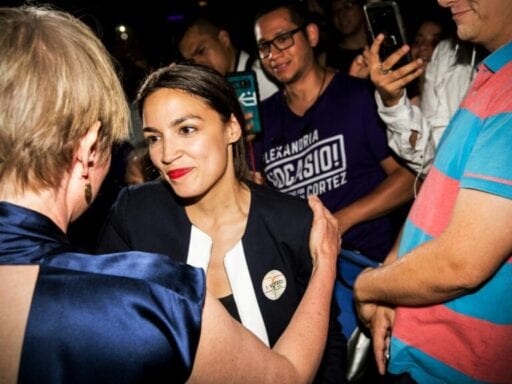 Ocasio-Cortez is part of a larger trend of progressive women candidates of color running for Congress and for statewide office who are enjoying record success so far this year. Whether Ocasio-Cortez’s victory is indicative of a larger leftward trend among Democratic candidates, however, is hotly debated.

There are plenty of examples of Democrats nominating more centrist or establishment candidates. While opposition to President Donald Trump is a unifying element for all Democrats right now, the battle lines are shaping up between these two factions as the party considers reforms to its nominating convention rules. Which faction will prevail in 2020 remains an open question.

Less debatable, however, is what the 28-year-old Latina from the Bronx represents for the future of the Democratic Party, at least according to data from MTV and PRRI, who last year surveyed more than 2,000 young Americans, millennials, and teens, drawn randomly from a large online sampling pool and using both English and Spanish interviews.

Our analysis of their results shows that young women of color are distinct from both young white Americans and from young men of color in terms of policy views and partisan preferences — by a long shot. We also find young women of color to be the most politically engaged, which speaks to their potential future influence within the Democratic Party.

Take the question of who voted — and how — in 2016. As the figure above shows, relatively few millennials who were eligible and turned out to vote cast their ballots for Donald Trump — roughly one in four.

But for young women of color, the figure was just 10 percent. (For those interested in statistical testing beyond crosstabs, in a logistical regression both sex and being white were highly significant predictors of a Trump vote.)

For instance, women of color support building a wall along the Mexican border far less than other groups. On both immigration and economic concerns, millennials hold more liberal positions than Americans more generally.

But while about half of young Americans see the growing wealth divide as critical to them personally, two-thirds of women of color do. Many young Americans consider the high costs of higher education a critical issue to them personally — roughly 58 percent in the PRRI data. Again, however, young women of color are the most likely to say this issue is critically important to them.

Women of color also hold the most distinctly progressive attitudes on issues of discrimination and rights for minorities, indicating stronger beliefs that LGBTQ rights are critical to them personally and that discrimination against blacks has increased in the past year.

Also, women of color are the most overtly feminist of all millennials, although young white women are also more comfortable using this term to describe themselves than young men overall.

Finally, women of color are the most politically engaged. Across seven different areas (following politics online, posting on social media about political issues, signing online petitions, volunteering for a political cause, donating money to a cause or campaign, attending a public rally, or contacting an elected official), young women engaged in more activities than young men.

Young women of color, however, engaged in the most activities on average: 2.62 political or civic activities compared with 2.44 activities of white women. By contrast, young men of color averaged 2.22 activities and young white men only 1.78.

That young women of color nationally appear to be the most “woke” demographic in the age of Trump could predict future political trends. Millennial and post-millennial women of color are a growing group of voters and activists that have the potential to move the Democratic Party to more progressive positions, including on issues of women’s and LGBTQ rights, immigration, and economic values prioritizing human dignity.

Judging from other national surveys looking at women of color who are older, this is a group not likely to shift its views or its partisanship with age.

Notably, these are themes that resonated among primary voters in Alexandria Ocasio-Cortez’s Bronx district but are popping up in other regions as well. Such policies are emerging in platforms of other key women of color succeeding in this year’s Democratic primaries, such as Stacey Abrams, the first African-American woman to win a gubernatorial primary in Georgia, and Deb Haaland in New Mexico, who is on track to become the first Native American woman elected to Congress.

The excitement within the Democratic Party about these new voices and faces is immense, and party leaders would do well to take heed; the future of the party may very well rest in the hands of young women of color.

Melissa Deckman is from Washington College, and Shauna Shames is from Rutgers University Camden.