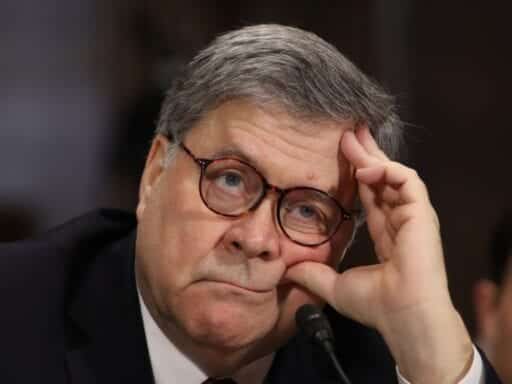 The attorney general sat through a Senate Judiciary hearing. He’s not extending the House the same courtesy.

Attorney General William Barr is refusing to testify in front of the House Judiciary Committee on Thursday, according to multiple reports. It’s the latest escalation of tensions between the White House and congressional Democrats.

Barr had been scheduled to appear in front of the House for weeks, and testified in front of the Republican-controlled Senate Judiciary Committee on Wednesday about his handling of special counsel Robert Mueller’s Russia investigation. But he abruptly canceled his appearance in the Democrat-controlled House after the committee voted along party lines to let staff lawyers question Barr for an extra hour after members of Congress did.

House Democrats have a lot of questions for Barr after new revelations that Mueller himself was unhappy with Barr’s initial summary of the special counsel’s report. A Washington Post report Tuesday night revealed that days after Barr sent his March 24 summary of Mueller’s report to Congress, Mueller wrote top Justice Department officials to say that Barr’s letter “did not fully capture the context, nature, and substance” of his full report.

Barr’s four-page March summary concluded that Trump did not obstruct justice, even though Mueller himself did not reach that conclusion.

“There is now public confusion about critical aspects of the results of our investigation. This threatens to undermine a central purpose for which the Department appointed the Special Counsel: to assure full public confidence in the outcome of the investigations,” Mueller wrote in his letter. The special counsel recommended Barr release the full report’s introduction and executive summaries to help fix the situation and restore public trust.

Nadler and House Speaker Nancy Pelosi have gone further, calling on Barr to release the full, unredacted report and for Mueller himself to testify in front of Congress.

Democrats’ trust in Barr is at an all-time low. Many want him to resign.

Among Democrats, Mueller’s letter reinforces the notion that Barr is working to protect Trump, and cannot be fully trusted. On Wednesday, the day after the special counsel’s letter was reported, House Intelligence Committee Chair Adam Schiff called on Barr to resign.

Barr, “in the interest of the department, should step down, but I have no expectation that he will,” Schiff told CNN’s Alisyn Camerota in an interview. “For an ordinary citizen, we might consider whether that’s perjury, but it’s worse when it comes from the attorney general of the United States, because it means the public cannot have confidence in what he says.”

Nadler has not joined the bandwagon of lawmakers calling on Barr to resign, but he’s made his grave concerns about the attorney general’s actions clear.

“The Special Counsel’s concerns reflect our own,” Nadler wrote in a statement Tuesday night. “The Attorney General should not have taken it upon himself to describe the Special Counsel’s findings in a light more favorable to the President. It was only a matter of time before the facts caught up to him.”

Nadler has said he will subpoena Barr if the attorney general doesn’t voluntarily appear in front of his committee on Thursday. Tensions between the White House and Democrats are already extremely high, as White House officials have denied Nadler’s and other committee chairs’ requests for documents and witnesses in their multitude of investigations.

13 federal criminal laws that the pro-Trump mob may have violated, explained
AI could be a disaster for humanity. A top computer scientist thinks he has the solution.
Florida becomes the first state in the South to vote yes on a $15 minimum wage
What’s up with the housing market in the pandemic
Joe Biden will get the Covid-19 vaccine on live TV
How to help a friend through a tough time, according to a clinical psychologist