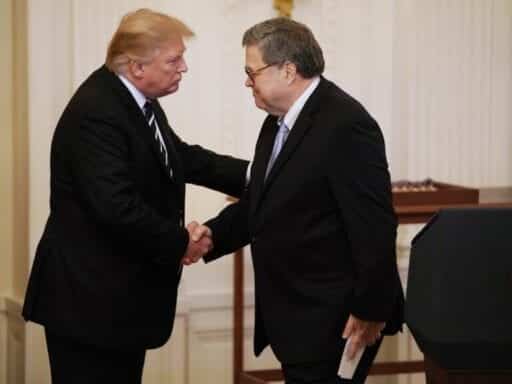 DOJ’s explanation for why Barr is lining his boss’s pockets doesn’t make sense.

The nation’s top law enforcement official plans to spend upward of $30,000 at a hotel the president still owns and profits from for a holiday party, according to a blockbuster scoop from the Washington Post’s Jonathan O’Connell and David Fahrenthold. Attorney General William Barr reportedly wants people to believe he’s doing so not to promote his boss’s business, but because no other event space was available in Washington, DC, on a Sunday night four months down the road.

The Post says Barr booked a December 8 family holiday party at the Trump International Hotel, and, citing a Justice Department official, reports that “Barr is paying for the event himself and chose the venue only after other hotels, including the Willard and the Mayflower, were booked. … The official said the purpose of Barr’s party wasn’t to curry favor with the president.”

Such are the stories Americans are being asked to swallow as the Trump administration normalizes a level of corruption that would’ve been hard to fathom in previous eras.

The DOJ official told the Post that career ethics officials were consulted, and “they determined that ethics rules did not prohibit him from hosting his annual party at the Trump hotel.” But it’s unclear whether Barr would’ve listened to ethics officials had they reached a different conclusion — during his confirmation hearing in January he refused to commit to following their advice. And since then Barr has behaved more like the president’s fixer than he has an independent arbiter of the law, such as when he provided the public with a misleading synopsis of Robert Mueller’s report that downplayed the evidence of the Trump campaign and administration’s wrongdoing.

In a statement emailed to Vox, Jordan Libowitz, communications director for Citizens for Responsibility and Ethics in Washington (CREW), noted how implausible the DOJ’s position is that Barr is essentially being forced to have his holiday party at Trump International because no other space is available in the city.

“This is particularly egregious, even in an administration built on graft. President Trump has created a system where officials can straight up pay him money in an attempt to influence him,” Libowitz said.

Trump broke decades of precedent by refusing to divest from the business he still owns and profits from while president. Although his sons Donald Jr. and Eric are responsible for the day-to-day management of his corporate empire, the Trump International — which Trump leases from the federal government — is one of his most lucrative properties. According to a financial disclosure form released in May, Trump International generated about $40.8 million in revenue for the president in 2018.

This is not the first time controversy has swirled around Barr’s trips to Trump International. In May, Barr was photographed dining there on the same night the hotel hosted a fundraiser for a pro-Trump super PAC.

But Barr — who also served as attorney general during the George H.W. Bush administration — has pretended to be painfully ignorant about Trump’s conflicts of interest. It’s worth recalling that at his confirmation hearing in January he pretended to be unaware of what the “emoluments clause” even is.

BARR: “I think there is a dispute as to what the emoluments clause relates to… I can’t even tell you what it says at this point.” pic.twitter.com/lHpcSqVCSJ

But, as the Post reports, Barr has apparently learned about emoluments in the meantime, because when he’s not spending money at the Trump Hotel, he’s defending the president’s conflicts of interest in federal court:

Barr’s decision to book the Trump hotel is noteworthy, in particular, because Justice Department attorneys are defending the president’s business in court. Trump’s D.C. hotel has hosted a number of foreign governments as clients, business that has generated two lawsuits, one from the attorneys general of Maryland and D.C. and the other from about 200 Democratic members of Congress.

Both cases are being considered in federal court, and the Justice Department is defending the president’s position that he has not run afoul of the anti-corruption provisions in the Constitution called the domestic and foreign emoluments clauses.

The corruption is increasingly in plain sight

News of Barr’s holiday party comes as the Trump White House makes a push to host next year’s G7 at another property the president still owns and profits from — the Trump National Doral golf resort in Florida.

Trump’s explanation for why he thinks Doral is the best site for the G7 is just as implausible as Barr’s rationale for dropping $30,000 at the Trump International.

“It’s a great place. It’s got tremendous acreage,” Trump told reporters on Monday. “People are really liking it. … We haven’t found anything that could even come close to competing with it.”

In both instances, the quiet part — that spending money at the president’s properties is good because the president profits from it — isn’t quite being said audibly yet. But it’s getting louder.

Trump’s White House is doing a bad job contact tracing its Covid-19 cluster
Facebook and Twitter suspend Trump’s accounts
Fox News cuts away from Trump roundtable after he describes human trafficking in grisly detail
Watch: the longest “blood moon” lunar eclipse of the century
How images of the coronavirus are made
Love, delayed