Wisconsin’s primaries are setup for the real battle in November 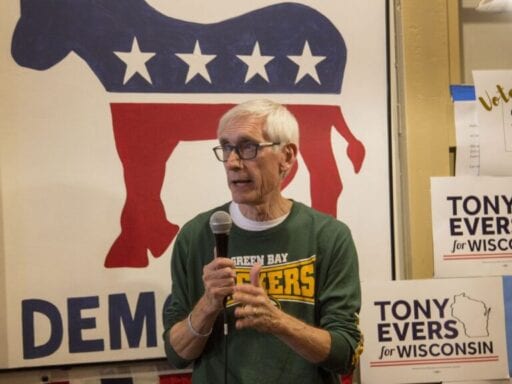 It’s a key state for Trump’s chances, and Republicans hope to win a supermajority in the state legislature.

The main event in Wisconsin’s general election this fall will be the presidential contest, especially since it’s one of the most important swing states in the country. But Tuesday’s primaries in the state will have interesting implications at both the congressional and state legislative levels.

For the legislature, Democrats are trying to stop Republicans from winning supermajorities in both chambers. If the GOP wins those supermajorities, they could override Democratic Gov. Tony Evers’s vetoes and block any attempts to reform their extremely gerrymandered statehouse maps.

Meanwhile, one of Wisconsin’s eight congressional seats might be in play — the third district, which Trump won in 2016 and is represented by a longtime Democrat, Rep. Ron Kind (D). He faces a primary challenger from the left, and two Republicans with the backing of different factions of the party are battling for the nomination to take him on.

Finally, in the Fifth District, there will be a passing of the torch, as Rep. James Sensenbrenner (R), who has been in Congress since 1979, is retiring. His likely replacement is already quite well-known in the state: It’s state Senate Majority Leader Scott Fitzgerald, who’s been at the center of many controversies in Wisconsin’s tumultuous recent politics — though Fitzgerald has to win the primary first.

Wisconsin’s Third District, spanning the state’s southwest, is the closest thing to a swing district in the Badger State on the presidential level — Donald Trump won there by 4.5 percentage points in 2016. But the district’s congressional seat has long been occupied by Rep. Ron Kind, a Democrat who first entered Congress in 1997 and has won all his recent reelection contests comfortably. (Kind was unopposed in the general election in 2016, and won by nearly 20 percentage points in 2018.)

Sensitive to his district’s pro-Trump result in 2016, Kind has stressed his moderation. For instance, he was cautious on the topic of President Trump’s impeachment (in explaining his eventual vote for it, he emphasized that he’s “the only member of Congress who has voted to open impeachment inquiries against Presidents Clinton and Trump.”)

As a result, Kind has drawn challengers from both the left and right. In the Democratic primary, he’s facing Mark Neumann, a former missionary and pediatrician. Neumann has criticized Kind’s lack of support for Medicare-for-All, but his primary challenge hasn’t drawn much national attention. Kind is the clear favorite, according to Barry Burden, a political science professor at the University of Wisconsin-Madison.

Both are running as conservative Trump supporters, but, as Olivia Herken of the Lacrosse Tribune recently wrote, Van Orden has criticized Ebben for signing a petition to recall Gov. Walker back in 2011. Ebben (who is 30 years old) countered by saying she only did so because she believed Democratic “lies” back then, and that she’s now a conservative “convert.” The Cook Political Report currently rates this race as “Likely Democratic,” but still, Republicans are hopeful for a pickup if Trump can perform well in the district again.

The retirement of 21-term Rep. Jim Sensenbrenner means an open-seat contest in the Fifth District, which encompasses suburbs of Milwaukee. The district is heavily Republican, so the winner of the GOP primary could secure a safe Republican seat for some time (depending on how redistricting goes).

The frontrunner here is Scott Fitzgerald, the majority leader of the Wisconsin state Senate, a staunch social conservative who has been a major player in the controversies that have roiled the state starting with former Gov. Scott Walker’s administration. “He’s one of the few Republican leaders who’s still standing from 10 years ago,” says Burden.

Then, in the lame-duck session after Walker lost the 2018 election to Democrat Tony Evers, Fitzgerald and Republican legislators passed new laws restricting the powers of the governor’s office. More recently, Fitzgerald has been sparring with Evers over the governor’s statewide mask-wearing mandate.

Fitzgerald’s opponent in the primary is businessman Cliff DeTemple, who has argued that he has less “baggage” and hasn’t been “in office too long,” but DeTemple is viewed as the underdog. In the general election, the GOP nominee will face Democrat Tom Palzewicz, an executive coaching consultant, but Palzewicz will face an uphill battle due to this district’s Republican lean.

Key state legislative races could give Republicans a supermajority

Though Evers won the governorship for Democrats in 2018, both chambers of Wisconsin’s state legislature remained in Republican hands, thanks in part to some spectacular gerrymandering. The good news for Democrats there was that Evers’s win would, it seemed, give him the power to veto unfair maps during the next redistricting in the 2021-2022 session.

There’s just one catch — if Republicans manage to flip just six state legislative seats (three in the Assembly and three in the Senate), they’ll control two-thirds of each chamber, which would let them override Evers’s vetoes and gerrymander the state to their hearts’ content.

That would be a tall order, but Mitchell Schmidt of the Wisconsin State Journal recently ran down the key districts that Republicans say they’re focusing on flipping. Some of those that have contested primaries are:

So these primaries will determine the candidates in these races, which will be key to determining whether the GOP can pull off a supermajority. But Wisconsin Democrats aren’t taking this threat lightly; they’ve launched a campaign called “Save the Veto,” and the state party just raised $10 million, the best fundraising quarter in its history.

Elsewhere in the state legislature contests, the longest-serving state legislator in American history — 93-year-old state Sen. Fred Risser (D), who’s represented the 26th district since 1962 — is retiring. This is a safe Democratic seat, and seven Democrats are vying for the nomination. Burden points to business owner Kelda Roys as the leading candidate, but the contest also features two young Muslim women of color, Nada Elmikashfi and Aisha Moe. Both are critical of the Democratic establishment, and announced their bids before Risser decided to retire. Brianna Reilly of the Cap Times has more on this primary here.

5 stunning Trump foreign policy moments from Bob Woodward’s new book
CPAC speakers keep saying Democrats want to ban cows and legalize infanticide. They don’t.
Lab-grown meat and the fight over what it can be called, explained
Mr. Robot wraps up with a near-perfect final season about our need to connect
The exhausting, lucrative world of childhood sleep consulting
2 primary races to watch in Indiana