With American Son, Netflix brings Broadway to the screen in an intriguing new way 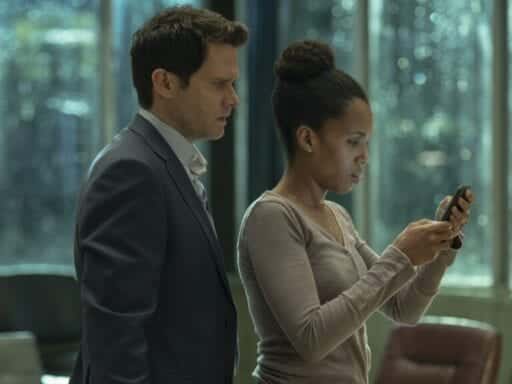 The adaptation, starring Kerry Washington, doesn’t land. But it might signal new things for the streaming giant.

The premise: On the night a teenage boy goes missing, his parents Kendra (Kerry Washington) and Scott (Steven Pasquale) end up at the police precinct. They’re trying to figure out what happened to their son — and they end up reopening old wounds concerning race, fear, and their rocky marriage in the process.

What it’s about: American Son is based on Christopher Demos-Brown’s Broadway play by the same name, which opened during the winter 2018 season. Kenny Leon, who directed the play, returns for the film, as does the entire cast; in addition to Washington and Pasquale, Jeremy Jordan and Eugene Lee star.

The result is less compelling for what it is than for what it suggests about the type of programming Netflix might be experimenting with. American Son doesn’t really work as a movie. Its theatricality comes across as forced and curiously inert on screen, at close range to the actors, and its conversations about race and policing in particular feel stilted and contrived — like pontifications snatched from national conversations and simply repeated by the characters, rather than expressions of what they deeply feel and think.

But the staging, which feels like it’s for a play rather than a movie, points toward something interesting. Virtually the entire story takes place in one precinct’s waiting room, and the effect is that it feels more like we’re watching a play than a movie, though it’s obviously still a feature film.

Bringing theater to a broad audience is tricky; experiments with forms like National Theatre Live and Broadway HD have tried to make innovative theater productions available outside major metropolitan areas, and Broadway musicals like Peter Pan, The Wiz, Grease, Rent, and Jesus Christ Superstar have been broadcast live on TV.

Netflix ventured into the same sphere with Oh, Hello on Broadway in 2017 and Springsteen on Broadway in 2018. But neither are conventional Broadway shows; the former, starring Nick Kroll and John Mulaney, changed every night and welcomed special guests, while the latter is more of a concert than theater.

But American Son is a straight play. It’s not a filmed version of the play as it is performed on a stage; instead, it’s somewhere between a play and a movie. Watching it, you can imagine a world in which new plays and revivals that achieve major stage productions find a broader audience through Netflix and other streaming platforms, creating space for new writers, directors, and actors to be seen and heard outside the more insular theater environment fostered in New York and a handful of other cities.

So it’s a shame that American Son doesn’t work as well as it might. But if it’s the signal of theater becoming more accessible as an art form, it may be worthwhile after all.

Critical reception: American Son currently has a score of 33 on Metacritic. At the Hollywood Reporter, John DeFore writes, “Any failure to expand into cinema’s possibilities is overshadowed by the uniformly strong performances in a four-person cast led by an excellent Kerry Washington.”

How to watch it: American Son starts streaming on Netflix on November 1.

We have a solution for the opioid epidemic. It’s dramatically underused.
Cory Booker on why Democrats should go bolder on gun control
Can US companies solve the Trump tariff problem by manufacturing in the US? It’s complicated.
Vox Sentences: Boris calls the queen
Want to help animals? Focus on corporate decisions, not people’s plates.
An expert on asylum seekers and refugees is joining Biden’s National Security Council