With one twist, RuPaul’s Drag Race: All Stars became a lot more compelling and a lot like Survivor 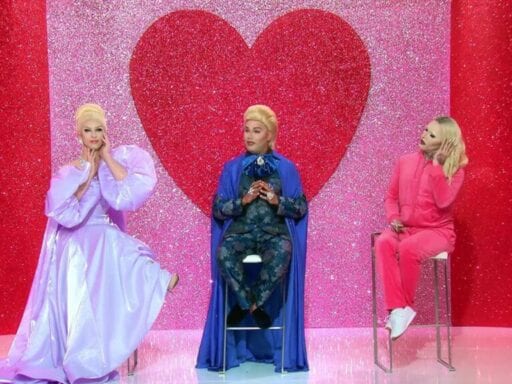 A chaos agent got the queens on Drag Race: All Stars to stop playing nice and start getting real.

The best sport airing on television right now is not what most would think of as a sport. Instead, it’s VH1’s campiest reality competition show, RuPaul’s Drag Race: All Stars. The queens of Drag Race bring their charisma, uniqueness, nerve, and talent week in and week out.

Like star athletes, drag queens have their strengths and weaknesses. Some queens are better at giving us looks, others are better at being funny, and a few excel in pageantry or dance. Determining the best of the bunch means looking for a queen who’s excellent in their specialty and the other elements of drag performance. Drag Race has always emphasized the importance of being an all-around skilled performer, but the All Stars installments of the series feature only the best of the best (well, the best of the best of any drag queen willing to give herself up to the wolves of reality TV for a second round, that is).

As the queens out-funny, out-fashion, and even out-sing each other, the real winners are the viewers at home. The result is something so joyous, so silly, and sometimes even inspiring. And with a new twist, this season now has some dastardly drama.

The rules of Drag Race have changed (again)

After 11 years on the air and multiple iterations, the RuPaul’s Drag Race franchise is an undeniable force of mainstream pop culture. Host RuPaul’s catchphrases “Shantay, you stay” and “Sashay away” are as recognizably quotable as those from any other reality TV phenomenon — right up there with Survivor’s “the tribe has spoken” and Top Chef’s “please pack your knives and go.” Ru usually drops one of these lines at the end of the show’s elimination round, where two low-scoring queens face off in a lip-sync battle. The losing queen must “sashay away”; the winner is granted the comforting “Shantay, you stay,” and moves on to the next episode.

But for Drag Race: All Stars’ past four seasons, these elimination rounds have transformed into ones less conventional and more strategic — and, best of all, way more dramatic.

This time, for the All Stars edition’s fifth season, the powers that be changed the format again: Queens are now allowed to vote each other out.

Once Ru names the week’s worst entertainers after a main competition, the remaining safe queens have to vote for which contestant they want to see go home. There is no limit to the number of queens Ru can choose to face elimination, which is already one big difference from the standard show. A more meaningful change is that the week’s single top performer can override these votes and send whoever they want packing. But in order to kick out a contestant of their choice, the challenge winner needs to defeat a “lip-sync assassin” — not a literal killer of drag queens, but a former Drag Race contestant from a previous season who is best known for being proficient at lip-syncs.

Facing one of these assassins is its own extra challenge, though, so a more compelling option is for contestants to try wooing each other into voting out the same person. These new elimination rules open the door for gamesmanship and subterfuge as the queens can conspire against one another in ways more conniving than we’ve ever seen on a Drag Race series. Since no one on the chopping block knows who exactly voted against them in the moment, it keeps them all on their toes about whom they can trust.

A possible scenario: A frontrunner who’s having a bad week could get suddenly ousted by other queens who can manipulate the game by rallying a vote. And the frontrunners are clear in All Stars season five, with mega-talented Shea Couleé and hilarious Jujubee as the true competition. They’re leagues better than their competitors, and if this were any other reality show, they’d be voted out by the other contestants as soon as they got a chance, for being the biggest threats.

Yet no one’s taken advantage of this option. Everyone’s been playing nice. Until last week.

The current season of Drag Race: All Stars has been a two-horse race almost from the beginning. Shea Couleé and Jujubee have consistently been the highlight of every episode by stunning on the runway and dominating in challenges. Jujubee is effortlessly funny, a clutch skill since the show is mostly based around challenges that involve making an audience laugh. Shea’s strengths, meanwhile, are more about her looks, ingenuity, and show-stopping performances.

When another queen manages to win a challenge, it almost seems as though the producers threw them a bone, simply to break up the monotony of every episode ending with a win for Shea or Jujubee.

The most the other queens can seem to hope for, though, is coming in third place. Prior to the show’s July 3 episode, queens Alexis Mateo and Miz Cracker were fighting for the honor of being the best performer not named Shea or Jujubee. And below Mateo and Cracker, India Ferrah and Blair St. Clair floated safely along to the top six.

And then the status quo changed dramatically.

Ferrah is a queen whose most famous moment was a controversial lip-sync performance with another memorable contestant, Mimi Imfurst, during her original season of drag race:

For most of this season of All Stars, Ferrah hasn’t really proven why she’s anything more than “the one drag queen that got hoisted into the air by another, much larger drag queen.”

After another dismal performance in a challenge, Ferrah was placed in the bottom. RuPaul revealed that along with Ferrah, every queen (except for the challenge winner, Shea, to no one’s surprise) was up for elimination. Seemingly seeing the guillotine on the horizon, Ferrah immediately pulled Shea aside to plead her case. Ferrah told Shea that there was a traitor in Shea’s midst: Mateo and a since-eliminated queen had campaigned to vote Shea out during Shea’s single appearance in the bottom this season, back in episode three. Though the viewers know that Mateo voted for Shea in that episode, Mateo denied campaigning to kick Shea out — though she did not deny voting for Shea, either.

The revelation called everything we knew about the game into question. Up until this game-changing episode, the queens had been playing fair and voting off the person with the worst track record.

Was Ferrah lying about Mateo’s campaign to ax Shea? If so, then why did Mateo vote for Shea in that episode and not one of the two other queens in the bottom? Did Mateo try to get the other queens to join her in her crusade against Shea? Then why didn’t the other queens say so before? And if Mateo did campaign against Shea, then why didn’t the producers even catch it on camera — every single interaction of the show is filmed, enough for an after-show called Untucked that shows the behind-the-scenes footage of the episode. All the producers apparently have to show for this allegation is Ferrah’s word.

That noted terrible actor Ferrah sounded so sincere when revealing Mateo’s sabotage is almost enough to convince everyone she was telling Shea the truth.

After this revelation of Mateo’s possible crusade against her, Shea was left to choose between sending home one of two queens: supposed ally Ferrah or supposed traitor Mateo. And in the end, Shea chose to send Ferrah home, despite Ferrah’s best efforts to gain Shea’s trust. Her claims against Mateo weren’t enough to save her.

Ferrah’s scorched earth tactic changed how Mateo will have to play the game going forward, as the other queens now wonder if anyone can or should trust Mateo. What had started out as a competition built on good-faith decisions, where people based eliminations on contestants’ overall success during the show, turned into something more along the lines of Survivor — a game where no one knows whom to believe.

Every queen suddenly learned they have to look out for themselves and no one else. And Ferrah, though underwhelming as a performer, gave All Stars something no other queens could as her parting gift. She single-handedly changed the show int the best kind of sport: one with a bolt of edge and drama and some possible backstabbing.

The horrible celebrity biographies of Amazon are impossible to explain
Millennials have dinner parties, they just don’t call them that
Michael Cohen claims Trump is lying about his knowledge of the 2016 Trump Tower meeting
Vegan meat alternatives are on the rise
“12 more years!” Trump’s opening speech got the 2020 RNC off to a dark start
I was always terrified of wasting time. A cancer diagnosis made me reconsider.