Woody Allen got a book deal. Staff at his new publisher have walked out in protest. 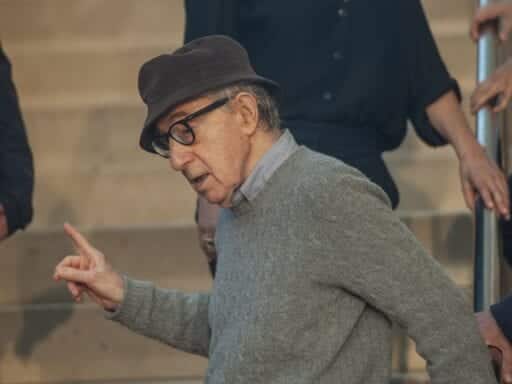 Hachette Book Group employees took to the streets, saying, “We stand in solidarity with Ronan Farrow, Dylan Farrow, and survivors of sexual abuse.”

In a statement posted to Twitter, employees said, “We stand in solidarity with Ronan Farrow, Dylan Farrow, and survivors of sexual abuse.” The message refers to Allen’s adopted daughter Dylan Farrow, who says Allen molested her when she was 7 years old, and his son Ronan Farrow, who last year published a book about sexual predators, Catch and Kill, with Hachette. Supporters of the walkout are gathering on social media under the hashtags #HachetteWalkout, #LittleBrownWalkout, and #GrandCentralWalkout.

Hachette announced earlier this week that its imprint Grand Central Publishing would be putting out Allen’s memoir Apropos of Nothing on April 7. The news sparked immediate and high-profile backlash: Allen has been accused by Dylan Farrow of molesting her, which in our post-Me Too era has often been understood to mean that Allen is now untouchable. In 2018, a number of actors who have appeared in Allen’s movies made public apologies for ever having worked with him. Amazon tried to wriggle out of its contract with him.

The #littlebrownwalkout marks a real and important shift in publishing. The next generations will not stand for this utter lack of integrity. Proud too of Grand Central employees who are adamantly against this book deal. pic.twitter.com/luB3iSULPw

Hachette’s announcement was especially controversial because one of the highest-profile books it put out in 2019 was Ronan Farrow’s Catch and Kill. Published by the Hachette imprint Little, Brown, and Company, Farrow’s book chronicles his investigation of Harvey Weinstein and Weinstein’s history of sexual assault and rape. Farrow is Allen’s son, and he has been public about his support for his sister Dylan Farrow and his disavowal of his father.

Soon after Hachette’s announcement, Farrow dropped the company as his publisher. In a public statement posted to Twitter, he condemned Hachette’s decision, saying, “It’s wildly unprofessional in multiple obvious directions for Hachette to behave this way. But it also shows a lack of ethics and compassion for victims of sexual abuse, regardless of any personal connection or breach of trust here.”

Hey, just wanted to share my thoughts on some recent news: pic.twitter.com/ovPczgx8pB

In a private email to Hachette obtained by the New York Times, Farrow was even more scathing. “As you and I worked on Catch and Kill … in part about the damage Woody Allen did to my family … you were secretly planning to publish a book by the person who committed those acts of sexual abuse,” Farrow wrote. He concluded, “Obviously I can’t in good conscience work with you any more. Imagine this were your sister.”

Dylan Farrow also condemned the announcement, saying, “Hachette’s publishing of Woody Allen’s memoir is deeply unsettling to me personally and an utter betrayal of my brother whose brave reporting, capitalized on by Hachette, gave voice to numerous survivors of sexual assault by powerful men.”

Both Ronan and Dylan Farrow noted that Hachette had not fact-checked Allen’s memoir. That’s a common practice in book publishing, which generally places the burden of accuracy on the author. But the practice has led to multiple scandals in high-profile releases over the past few years, most recently when Jill Lepore’s book was found to contain multiple errors. In contrast, Dylan Farrow pointed out, her own claims have been subject to extensive journalistic fact-checking.

Since Tuesday, when Hachette announced its plans to publish Allen’s memoir, employees from both Little, Brown and Grand Central have repeatedly attempted to speak to Hachette’s human resources department about the memoir. On Thursday, the company held two town halls in which staff could air their concerns — and by 2 pm, shortly after the second town hall meeting, plans to walk out had coalesced. At 3 pm, concerned Hachette employees, including both junior staff members and senior, director, and executive-level staff, had left the company’s offices. The walkout affects Hachette’s office locations in both New York and Boston.

In an industry as notoriously hierarchical and slow to evolve as publishing is, that’s a risky decision, with few if any precedents to guide protesters.

75 plus employees of Hachette are standing in solidarity with @ronanfarrow, @realdylanfarrow and survivors of sexual assault and walked out of the Hachette offices today in protest of Woody Allen’s memoir. #HachetteWalkout #LittleBrownWalkout pic.twitter.com/wTNi3c7gy8

Allen has reportedly been shopping a proposal for his memoir to publishers for years. The New York Times reported that in 2003, he nearly sold it to Penguin for $3 million, but at the last minute decided to hold out for more money. And in 2019, as Allen’s reputation faltered in the wake of the Me Too movement, multiple publishers reported that an agent representing Allen had reached out to them with a memoir proposal to no avail.

In 2019, the narrative was that publishers just weren’t interested and that a post-Me Too Allen was a liability for any company. But the Guardian reports that Hachette quietly acquired Allen’s book just under a year ago, around the same time that other publishers were declaring the memoir dead on arrival. Hachette kept the deal under wraps until this month.

In an emailed statement to Vox, Hachette Book Group CEO Michael Pietsch said, “We respect and understand the perspective of our employees who have decided to express their concern over the publication of this book. We will engage our staff in a fuller discussion about this at the earliest opportunity.”

Trump blasted US allies within minutes of arriving at NATO summit
This goofy bird vs. the fossil fuel industry
The Senate has approved the USMCA, bringing Trump’s trade deal one step closer to reality
Games of Thrones season 8
Why Scott Pruitt lasted so long at the EPA, and what finally did him in
Trump lashes out at Fox News for new poll showing him losing to all the Democratic candidates