Worker angst is spreading around the globe. This pilots’ strike is the latest example. 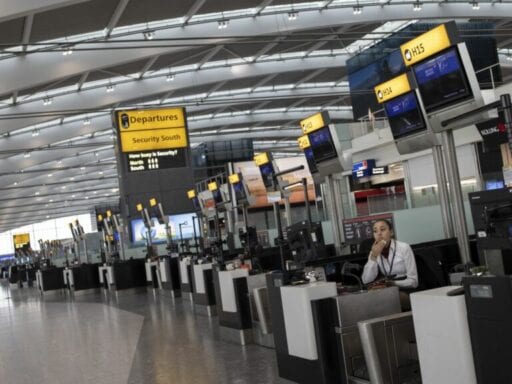 Thousands of flights for one of the largest airlines in the world remain grounded as pilots strike for a second day in a row.

British Airways canceled all of it flights Monday and Tuesday — nearly 1,700 — after most of its pilots refused to go to work over a contract dispute. The pilots’ labor union had rejected a proposed 11.5 percent raise over three years, arguing that they want a much bigger share of the company’s soaring profits. About 4,000 pilots are involved in the work stoppage.

This is the first time British Airways pilots have gone on strike, and grounding the fleet is costing the airline about 40 million euros a day. But employees aren’t budging. They have another strike planned later this month.

“Pilots are standing firm and have shown just how resolute they are today. British Airways needs to start listening to its pilots and actually come up with ways of resolving this dispute,” Brian Strutton, general secretary of the British Airline Pilots’ Association, said in a statement Monday.

The union pointed out on Twitter that they want 5 million euros more in pay — far less than the cost of grounding all the flights.

The airline, in response, blamed the union, saying it gave them “no choice” but to ground flights and apologized to customers for the union’s actions on its website.

“We’re very sorry about the impact [BALPA’s] action has had. We don’t underestimate the inconvenience caused, for which we are deeply sorry,” the airline wrote in a statement online.

Meanwhile, passengers have been posting photos of empty terminals — from London to Singapore and New York — that are usually crowded, and British Airways executives spent the day Monday preparing to hear from angry investors (stock prices for the airline’s parent company, IAG, dropped 3 percent on Monday).

The pilots’ strike is just the latest sign that general labor unrest in the US is not isolated. Workers around the world have been getting a smaller and smaller share of income growth, and that frustration is surfacing abroad too. For example, Amazon warehouse employees in Europe have been striking to protest low pay and tough conditions. Tens of thousands of factory workers in Mexico refused to go to work earlier this year until they got a pay raise, and France recently experienced a violent populist uprising.

The airline strike is notable because pilots rarely go on strike; the disruption to passengers and global travel is huge. In the US, it’s practically illegal for pilots to do so. The drastic decision by British Airways pilots shows that recent worker unrest is a global phenomenon. The number of workers who participated in work stoppages nearly doubled from 2016 to 2018, according to the International Labour Organization, with 106 million workers involved in strikes last year. Workers in more and more countries are demanding a bigger cut from company profits.

Airlines are making money — lots of it

Fortunes have turned around for airlines in the US and Europe. During the Great Recession, consumers stopped flying so much and airlines were hemorrhaging money. They slashed employee pay and perks. (Remember when passengers could check luggage for free?)

Starting around 2013, as the global economy began to recover and people began flying again, airlines have been raking in the profits. Huge profits. Commercial air travel has picked up dramatically since then and global airline profits have doubled. In 2018, that added up to $30 billion, according to the International Air Transport Association.

British Airways made more than 3 billion euros in 2018 — a stunning change from 2012, when it was losing money.

British Airline Pilots’ Association told the BBC that members took lower pay raises and made sacrifices during the hard times. The union says that because the airline’s financial performance has improved (its parent company IAG reported a 9 percent rise in profits last year) — employees should see a greater share of the profits. More than 90 percent of the airline’s pilots voted to authorize a strike to get a bigger raise than the airline offered.

Pilots for Ryanair, Europe’s largest budget airline, recently went on strike too in the UK, and they have more strikes planned this month. The budget airline’s pilots are fighting with the company over pensions, maternity benefits, allowances, and pay structure. In April, pilots at Scandinavian airline SAS pilots went on strike for a week, until they were able to reach a deal over pay raises.

Airlines based in the US are also starting to get restless. Frontier Airlines pilots threatened to go on strike last year after stalled negotiations over pay.

However, in the US, it’s more complicated for pilots to go on strike. By law, they have to first take their contract dispute to mediation. If they don’t make progress, then they can vote to authorize a strike but must then wait 30 days before beginning the work stoppage. Frontier pilots did all of that but managed to reach a deal and called off the strike.

Currently, American Airlines pilots are negotiating a pay raise. The pilots are raising the same frustration that workers across the US are raising: The Great Recession is over, companies are profitable again, but workers aren’t seeing much of the economic gains.

The recent unrest in the airline industry reflects growing frustration around the world with deepening income inequality.

Thousands of Amazon warehouse employees in the UK, France, and Germany have organized strikes since 2017 to protest harsh working conditions and low pay. This year, Amazon workers in the US joined them.

In fact, last year worker frustrations reached a boiling point in America. The labor unrest started with a teachers strike in West Virginia and ended with Marriott workers picketing across four states.

A record number of US workers went on strike or stopped working in 2018 because of labor disputes with employers, according to new data released in February by the US Bureau of Labor Statistics. A total of 485,000 employees were involved in major work stoppages last year — the highest number since 1986, when flight attendants, garbage collectors, and steelworkers walked off the job.

The increasing number of workers involved in labor strikes suggests that average Americans are not experiencing the “economic miracle” that President Donald Trump has described. They see the economy expanding and profits growing, but this doesn’t extend to their paychecks.

The airline industry is no different. Pilots — and workers in general— have become frustrated by the massive bonuses their CEOs are getting, while their pay raises barely outpace inflation.

Trump’s ignorance was on public display during coronavirus meeting with pharmaceutical execs
Rapid $1 Covid-19 tests exist. Why can’t we get them?
Live results for California’s ballot measure on restoring affirmative action
Trump just signed a bipartisan bill to confront the opioid epidemic
Trump lifts steel and aluminum tariffs on Mexico and Canada
The economy is growing. Democrats want to know who’s benefiting.