Would a female candidate be treated like Pete Buttigieg? Amy Klobuchar sees a double standard. 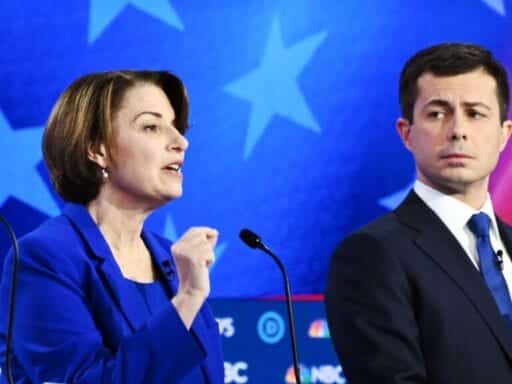 Women are held to a higher bar, Klobuchar said at the Democratic debate Wednesday night.

Ever since candidates began vying for the 2020 Democratic nomination for president, observers have wondered whether male candidates like Mayor Pete Buttigieg are held to different standards than their female opponents.

On Wednesday, the issue came up on the debate stage.

Moderator Andrea Mitchell quoted previous comments by Sen. Amy Klobuchar of Buttigieg, “Of the women on the stage, do I think we would be standing on that stage if we had the experience he had? No, I don’t.”

“Senator,” Mitchell asked of Klobuchar, “what did you mean by that?”

“Pete is qualified to be up on this stage, and I am honored to be standing next to him,” Klobuchar said. “But what I said is true. Women are held to a higher standard. Otherwise we could play a game called name your favorite woman president, which we can’t do because it has all been men.”

But, Klobuchar said, that doesn’t mean a woman can’t do the job, “If you think a woman can’t beat Donald Trump, Nancy Pelosi does it every single day.”

The moment made explicit a thread of criticism that’s run through campaign coverage from the beginning: Male candidates, many say, get more coverage and adulation than female candidates, despite, in some cases, being less qualified. One of the men who got lots of early attention, former Rep. Beto O’Rourke, has since dropped out of the race. But Buttigieg is still around, and for some, he’s a reminder that a man can approach frontrunner status in the primary race with only a mayoral post to his name, while female senators struggle to prove they’re “electable.”

On Wednesday night, Klobuchar, at least, wasn’t having it.

Throughout the campaign, male and female candidates have gotten different treatment in the media

Early in the primary race, both O’Rourke and Buttigieg generated breathless media coverage despite limited political resumés. For O’Rourke, it was a Vanity Fair cover story in which he memorably said of the nominating contest, “Man, I’m just born to be in it.” (O’Rourke later suggested his words were taken out of context.) For Buttigieg, it was discussion of his affection for James Joyce’s Ulysses.

At the time, many observers felt that female candidates like Warren and Harris weren’t getting the same media treatment, despite deeper experience and, in some cases, more carefully crafted policy proposals.

“The men are given the most generous interpretation possible about who they are and what they want to do, and the women are held to the most skeptical, cynical standard possible,” Brianna Wu, who ran for Congress in Massachusetts in 2018 and is running again in 2020, told Vox in March.

Things have changed significantly since then. O’Rourke’s campaign struggled to take off — the Vanity Fair profile, as it happens, may have hurt more than it helped. Sen. Elizabeth Warren has risen to frontrunner status, with the media attention to match.

But some inequalities seem to remain.

Buttigieg has caught fire in recent weeks, with favorable polling in Iowa and New Hampshire. He’s helped in part by a narrative of how smart he is, even though other candidates share his academic bona fides. As Amanda Terkel points out at HuffPost, both Buttigieg and Sen. Cory Booker are former Rhodes Scholars, but the mayor’s reception of that scholarship gets far more attention than the senator’s. There are a number of possible reasons for the disparity — as Terkel notes, Booker has a record in Congress for media outlets to focus on, while Buttigieg does not. But the outsized praise Buttigieg gets for his intellect may also have to do with the fact that he’s a white male, while Booker is black.

And the fascination with Buttigieg’s brain comes despite the fact that, as Mitchell noted, he has never held statewide office and won his mayoral election by less than 11,000 votes.

Warren, meanwhile, is the one who more commonly faces questions about whether she’s likable enough to win — or whether she is, perhaps, too angry. A former Harvard Law School professor, she does get some attention for her intellect — but in her case, smarts are often framed as “wonkiness.”

There are other differences, to be sure, between Buttigieg and his female opponents. At the debate on Wednesday night, he cast himself as a political outsider who could beat Trump. And he has tacked closer to the center than either Warren or Sen. Bernie Sanders, positioning himself as an alternative for more moderate voters who don’t want to support former Vice President Joe Biden.

Still, when Klobuchar talked about women being held to a different standard, she was articulating something a lot of people have noticed on the campaign trail for months — and in politics and the workplace more generally for generations.

However, she also made another important point: Beyond Hillary Clinton’s loss to President Donald Trump, there’s no evidence that women in fact are not “electable” as leaders. Research shows that women win congressional races at the same rate as men, and female candidates have notched key victories recently at the national and state levels.

And, as Klobuchar noted, House Speaker Nancy Pelosi has frequently demonstrated an ability to outflank Trump, whose particular brand of macho bullying doesn’t seem to work as well on women as it does on men.

“I think what matters is if you’re smart, if you’re competent, and if you get things done,” she continued. And when it comes to winning elections, women have just as good a record of getting things done as men do.

We don’t know yet if lockdowns are working. But we could see results as early as this week.
'Womp, womp': Speaker's bureau dumps Lewandowski after he mocks migrant with Down syn...
Netflix’s To All the Boys: P.S. I Still Love You shows its predecessor didn’t need a sequel
Why every website wants you to accept its cookies
The most powerful moment of the Whitaker hearing had nothing to do with Mueller
Top cardinal admits the Catholic Church destroyed files to hide sex abuse