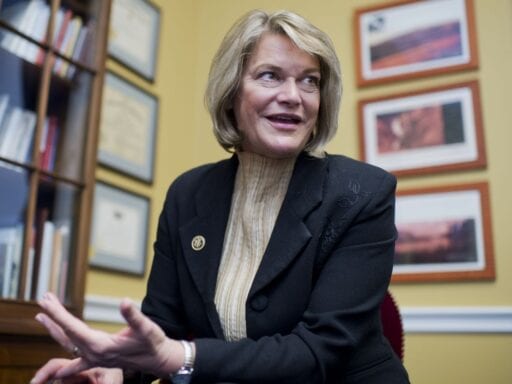 On Tuesday, Republican primary voters will effectively choose their state’s next US senator.

Sen. Mike Enzi, the four-term Republican incumbent who’s served as chair of the Senate Budget Committee since 2015, is retiring. He and the state’s junior senator, John Barrasso, have both endorsed former Rep. Cynthia Lummis for the seat.

Lummis held Wyoming’s one and only House seat from 2009 to 2017, when she retired (Liz Cheney, daughter of former Vice President and Wyoming Rep. Dick Cheney, holds the seat currently). She has strong support from establishment groups like the Chamber of Commerce and President Donald Trump, and from more grassroots conservative organizations. During her time in Congress, she was the only woman in the right-wing House Freedom Caucus and pushed to block appropriations bills unless they defunded Obamacare, contributing to the October 2013 government shutdown.

There are nine other Republicans on the ballot, though, and the one with perhaps the best shot of upsetting Lummis in the primary is Air Force veteran Bryan Miller, who unsuccessfully challenged Enzi back in 2014. Miller, the former chairman of the Sheridan County Republican Party, won a straw poll in late July for the seat at the Wyoming Republican Party’s convention. Turnout, however, was low due to Covid-19 (Miller got 126 votes to Lummis’s 65, with Converse County Commissioner Robert Short in third), and the party leaders might not be the best representation of the rest of the state: The Casper Star-Tribune’s Nick Reynolds reports that the Wyoming state party is “now almost fully controlled by the most conservative activists residing in the state’s most rural counties and arguably votes much differently from the Wyoming electorate writ large.”

Whoever wins the Republican primary is heavily favored to win the general election in November. Wyoming hasn’t elected a Democrat to the Senate since 1970, and most years the party barely competes. In 2014, Enzi defeated Charlie Hardy for reelection by a margin of 72.2 percent to 17.4 percent; in 2018, Gary Trauner got 30.1 percent to Barrasso’s 67 percent.

Nonetheless, there are six Democratic candidates. Without polling, it is hard to know who’s the frontrunner, but the candidates are Yana Ludwig, a self-identified socialist with endorsements from local chapters of the Sunrise Movement, Democratic Socialists of America, and Our Revolution; University of Wyoming zoology professor Merav Ben-David, who’s running a science- and climate-focused campaign; climate think tanker Nathan Wendt, who boasts an endorsement from Sen. Tammy Duckworth (D-IL); activist James Kirk DeBrine, whom party leaders have called on to drop out after attacks on his opponents they deemed anti-Semitic, ableist, and sexist; and perennial candidates Rex Wilde and Ken Casner.

The most likely result on Tuesday is a Lummis victory, followed by an easy general election win in November; she has won six different statewide elections in the past, two for state treasurer and four for the US House. But this is politics in 2020, so surprises are always possible.

2020 Democrats call for investigation into NBC sexual misconduct allegations ahead of debate
Colorado is fighting its largest wildfire in history
Why are the cats sexy? and other Cats questions you were too embarrassed to ask.
Millions of Americans risk being evicted. This tenants rights lawyer says the courts aren’t prepared...
Republicans are bringing back a bill to protect “abortion survivors”
Why Sundance, America’s largest independent film festival, matters