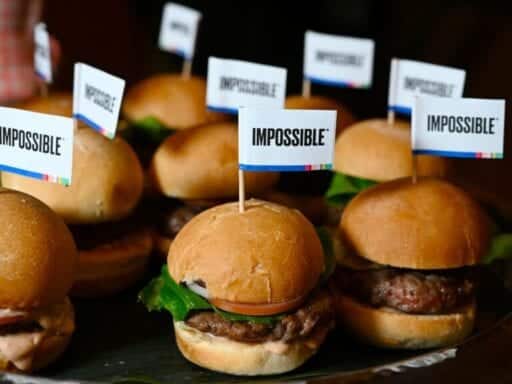 Here’s where to get the popular plant-based meat so you can cook it at home.

If you’re a fan of the cutting-edge meatless burgers produced by Impossible Foods, this is your lucky week: You’ll soon be able to buy them in grocery stores and cook them at home. This Friday, they’re hitting all 27 Gelson’s Markets in Southern California, including in San Diego and Los Angeles.

Don’t live on the West Coast? Don’t worry: Impossible Foods will announce more retailers later this month when its burgers are slated to debut at East Coast grocery stores. And the company plans to make them available in supermarkets in every region nationwide by mid-2020.

Impossible Foods products were previously only available at high-end restaurants and at chains, such as Burger King, Qdoba, Red Robin, and White Castle. The reason you couldn’t buy the patties raw in stores is the company was waiting for regulatory approval.

Impossible Foods products are made with heme, a protein that Impossible sources from soy leghemoglobin, which is found naturally in soybean roots.

That key ingredient is what allows Impossible products to mimic the texture of real meat, even making its burgers appear to “bleed” just like beef. But until recently, the Food and Drug Administration didn’t approve it for sale unless it was already cooked, which is why you had to get it from restaurants.

This regulatory hurdle has been preventing Impossible from selling its products at supermarkets, where its biggest rival in the plant-based meat space, Beyond Meat, is already on offer. Impossible worked with the FDA to get soy leghemoglobin approved, and in August, that approval finally came through.

“Our first step into retail is a watershed moment in Impossible Foods’ history,” said the company’s senior vice president, Nick Halla, in a statement.

A 12-ounce package of Impossible Burger will cost $8.99 at Gelson’s Markets, which is limiting each customer purchase to 10 packages per visit. Here’s how the product will look on supermarket shelves:

The past few months have been a time of incredible growth for the alternative meat movement, and as consumer demand surges, investors have been jumping on board. In April, Burger King announced its plan to make the Impossible Whopper available nationwide in all of its 7,200 branches. In May, Impossible Foods raised $300 million in new investor funding.

Meanwhile, Beyond Meat went public in May and has since been crushing it on the stock market. Its popularity was on clear view last month when a single KFC franchise in Atlanta began offering meatless chicken from Beyond Meat, and it sold out almost immediately with long lines of excited people thronging the building.

This trend is a big deal not just for your tastebuds but for the planet.

The rise of meat alternatives could help the fight against global warming by reducing the number of methane-producing cattle and the amount of land used for grazing. It could also help save hundreds of thousands of animals from suffering on factory farms. Plus, it could combat health risks like antibiotic resistance.

We’ve got a long way to go before plant-based meat makes a big dent in any of these problems: Although it’s a growing market, it still only accounts for 2 percent of retail packaged meat sales. But Impossible’s move into retail gets us one step closer to a revamped food system — and it gets you one step closer to grilling up a tasty meatless snack anytime the craving strikes.

Amazon is selling its futuristic cashierless technology to other stores
What’s actually happening at the US-Mexico border, explained
Ryan Zinke to the oil and gas industry: “Our government should work for you”
Trump on Covid-19: “I take full responsibility. It’s not my fault.”
Top officials are warning of Russian hacking. Trump hasn’t joined them.
Here are the candidates who qualified for the third Democratic debate — and those who might miss out