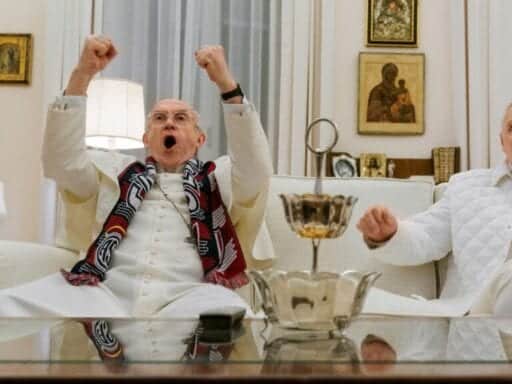 Anthony Hopkins and Jonathan Pryce star in a whimsical but thoughtful tale about Benedict, Francis, and God.

Just kidding. The Two Popes is a series of imagined conversations between two men, both of whom feel a call from God to serve the Roman Catholic church — but who otherwise don’t see eye to eye.

What it’s about: Fernando Meirelles (City of God, The Constant Gardener) directs this biographical and comedic drama about Pope Benedict XVI (Anthony Hopkins) and his successor: Cardinal Bergoglio (Jonathan Pryce), the eventual (and current) Pope Francis. The movie is set mostly in 2012, at a turning point in the history of the Church, as Bergoglio requests permission from Benedict to retire from the church, with which he’s become frustrated.

Bergoglio flies to Rome and meets Benedict at the pope’s summer home. And when he arrives, he’s surprised to learn that Benedict is also struggling with his calling. For several days, the pair converse — and sometimes spar — as they start to realize there’s more common ground between them than they’d thought

The Two Popes is thoroughly and purposefully fictionalized. (Steven Greydanus has chronicled its fabrications at the National Catholic Register.) But it’s also a surprisingly sensitive and often funny take on the promise and perils of leadership, as well as the struggle to serve God when he seems to be silent.

The Two Popes also operates as an introduction to an early conflict in the life of Pope Francis and how it shaped him, and it’s not afraid to ask hard questions of its characters about abuse in the church, as well as belief and doubt. And with two terrific performances by Anthony Hopkins and Jonathan Pryce — who are serious, angry, whimsical, and hilarious by turns — it’s a charming, often thoughtful film, modest but with big matters on its mind.

Critical reception: The Two Popes currently has a score of 75 on Metacritic. In the Globe and Mail, Kate Taylor writes that “it is extremely difficult to make something as invisible and ineffable as religious faith seem real, let alone touching, on film; doing that is only one of the achievements of Fernando Meirelles’ unusual look inside the papacy.”

How to watch it: The Two Popes opened in limited theaters on November 27 and begins streaming on Netflix on December 20.

What both the left and the right get wrong about the coronavirus economic crisis
Midnight Sun brings back the creepy, sublimated, wildly unhealthy eroticism of Twilight
A patio expert explains how to make winter socializing tolerable
Trump praises India’s religious freedom while Muslim-Hindu violence erupts
Six key moments from Amy Coney Barrett’s Supreme Court hearing
The US has a risky new plan to protect oil tankers from Iranian attacks