“You think about what marriage has become”: 4 couples on having virtual weddings 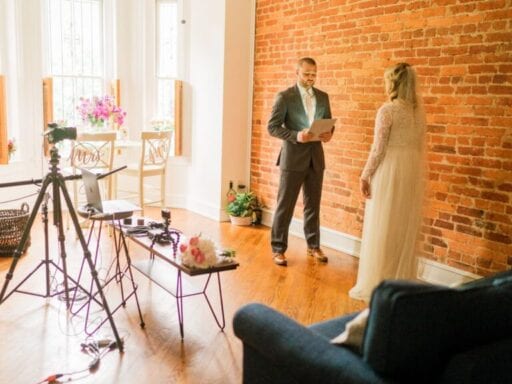 And how they’re finding more intimacy during these stripped down ceremonies.

Part of the Romance Issue of The Highlight, our home for ambitious stories that explain our world.

For Amanda Trocola and Jason Castellente of Washington, DC, the regretful cancellation calls from wedding guests were the first clue that their April nuptials, set to take place amid the picturesque cliffs of Malibu, were in peril.

“It was awful,” says Mel Sulaver of New York, who was due to wed Rob Sulaver in mid-March barefoot on a Mexican beach before a small crowd of 50 guests — before they, too, started calling, one by one, to bow out.

As the coronavirus became a global pandemic that would halt daily life and work, separate families, and put an end to gatherings joyful and otherwise, these couples were among a sea of would-be brides and grooms forced to postpone — or reimagine — their nuptials. They wondered whether weddings were even weddings without siblings or parents or grandparents, and, more importantly, what good it was to bring together loved ones if it also endangered them. “I went from crying hysterically,” says Sulaver, “to canceling the wedding.”

Jillian and Joshua Ogundele were set to marry in Savannah, Georgia, in a multi-day March affair, before calling it off, an intensely painful decision for Jillian. “I was too hurt to write a cancellation notice,” she says, “so my dad wrote it for me.”

But once the tears subsided, long days in quarantine reminded the couples of precisely whom they wanted to be stuck with for the long haul. “My, oh my, [relationships] sure step up a level when you’re spending 24 hours a day, seven days a week with anyone,” says Trocola.

By chance, Trocola and Castellente had already lined up their marriage license; the Ogundeles, who live in the Atlanta suburbs, had already been feted at bachelorette and bachelor parties and a bridal shower. And for Mel Sulaver, the idea of planning an entire wedding again sounded miserable: “There’s no way that I am going to go through this process again,” she realized. “There are other things we want to do next year.”

“What are we waiting for?” they all began to wonder.

It was Jillian Ogundele who landed on the idea of a virtual wedding, an idea she got from viral posts on Facebook Live, Instagram Live, and Zoom that began from the first days of lockdown. “I told Josh, and he was like …”

Though he has plenty of followers on social media, “we never imagined that our wedding was going to be broadcast. We’re private about this stuff,” says Rob Sulaver. But on the morning of their wedding, Rob, a founding member of the boutique boxing gym Rumble, taught a workout on Instagram Live that was viewed by thousands — and let slip that he would be married later that day. When they aired their wedding for friends and family that evening, not only were exercise enthusiasts watching, he says, but also “random people who ended up finding the broadcast, and watching and commenting on it in real time.”

Trocola and Castellente asked photographer Adam Mason, a friend who runs Mason Photography, to attend in person and capture their moment; he “popped on a long lens” to maintain social distancing and self-quarantined for two weeks, then helped set up the Zoom. “It was a lot fewer hugs and handshakes” than he’s used to, Mason says.

With quarantine weddings come snags, naturally. Parents had to be taught to how to use Instagram and Zoom. The wedding photos, so often a treasured record of the big day, are largely empty, or simply blurry shots of computer screens. Glamorous white wedding dresses, stuck in purgatory with locked-down tailors, or safely stored by quarantining mothers of the bride, had to be replaced with online finds. Trocola ordered a simple cream-colored, lace replacement dress and hoped for the best. Mel Sulaver had to don the fairy-like sparkly nude-colored gown she’d set aside for the night before her wedding. Jillian Ogundele doesn’t even usually wear makeup, so her friends FaceTimed her with tips for a bridal look. “I wouldn’t consider myself at my wedding-day best,” she says now, “but we got it done.”

Sean Bouvier, who wed his longtime love, David, in a ceremony in their Astoria, New York, apartment, was luckier: “Our outfits were here — two matching suits,” he says. They also managed to land a wedding license with New York’s “Project Cupid” online licensing system, launched in May to help couples waiting to marry during the pandemic; currently, the wait for documents is estimated to be months. But their rings were still being made by Cartier when New York Gov. Andrew Cuomo ordered businesses to close. In the end, a kindly employee stepped up to help the couple, and the rings arrived by mail in time for their big day.

Friends, too, dispatched deliveries: flowers, meals, “bottles and bottles of Veuve Clicquot,” much to Bouvier’s joy. Maybe it was too many bottles, actually — so many well-wishes arrived on their wedding day that they threatened to interrupt the ceremony, Bouvier says. “We left a note on the door: ‘Don’t ring the bell.’”

Across the East River, Mel Sulaver walked down an “aisle” from the bedroom to the living room of their Manhattan apartment. Rob read his vows in verse. “It felt like we were getting married,” she says, “and that’s what you want.”

It felt very real for Joshua Ogundele, too, right down to his very, very cold feet. “I went through the emotions I would have had. At one point, I deleted half my vows,” he says. “I actually did have a breakdown.” But he says, “Jill, she was like ‘Get it together. We have goals here. I’m not buying into what you have got going on.’ ”

In the end, there were no dessert spreads, no open bars, no sweetheart tables, no dance floors, no awkward speeches. (Though Joshua Ogundele scored some laughs from the “crowd” when he spilled champagne, slipped on it, and tumbled to the floor on his own wedding day.)

“I wouldn’t trade it for the world,” says Sean Bouvier, whose ceremony paid a nod to the five-year anniversary of the legalization of same-sex marriage. “It was super intimate. It’s a joyous moment in a negative time.”

“You think about what marriage has become,” says Mel Sulaver — characterizing it as a series of negotiations over guests and budgets rather than a pure display of love. A quarantine wedding, adds Rob Sulaver, “strips away a lot of the other things that traditionally go along with weddings. It sort of boiled it down to what was most meaningful to us.”

For Trocola, that sense of having to please no one but themselves and a handful of guests transformed every aspect of their nuptials. “We were able to write these really vulnerable and intimate vows knowing we weren’t writing them for an audience,” she says.

After the ceremony, Castellente and Trocola turned off the camera and slipped outside to their backyard. Castellente hit play on Johnnyswim’s “Take the World” on his cellphone, stuck it in the pocket of his suit, and reached for his bride. A few raindrops shook from the trees as they danced their first dance. Castellente chokes up slightly when recalling it. “It was like the world stopped around us.”

Lavanya Ramanathan is the editor of The Highlight. She’s a former features reporter for the Washington Post.