Young female activists like Greta Thunberg have the world’s attention 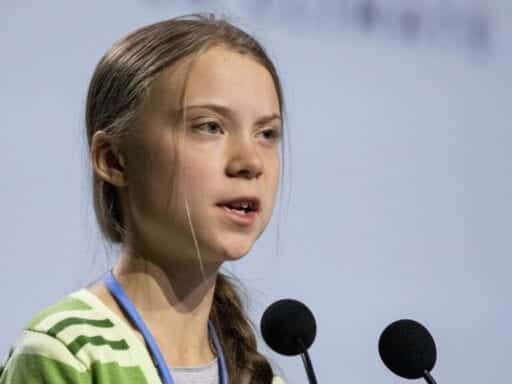 Will people in power take action?

“For decades, researchers and activists have struggled to get world leaders to take the climate threat seriously,” Charlotte Alter, Suyin Haynes, and Justin Worland wrote in Time’s cover story announcing the Swedish activist’s selection. “But this year, an unlikely teenager somehow got the world’s attention.”

Thunberg’s rise to international prominence is unlikely in the sense that she started her climate strike in August 2018 on her own, with no major advocacy groups backing her. But the fact that she’s a teenager actually puts her in good company: As we approach the beginning of the 2020s, more and more progressive movements around the world are being led by young people, many of them girls and women. And while those female activists have long been a key part of such movements, they’re getting mainstream attention in a way they haven’t always in the past.

According to Time, Thunberg herself was inspired by the Parkland, Florida, high school students who became gun safety activists after a shooter killed 17 of their classmates and teachers — student Emma González, for example, gave a widely seen speech after the shooting and went on to co-found the group March for Our Lives. Meanwhile, Thunberg is joined in her climate fight by activists like Jamie Margolin, 17, who co-founded the organization Zero Hour, and Xiye Bastida, also 17, who helped lead a student climate walkout in New York City earlier this year.

Beyond climate activism, young women in government are also capturing the attention of the media and the public. Rep. Alexandria Ocasio-Cortez, now 30, has made her age an asset, connecting with young progressive voters around issues they care about in ways that feel authentic to them. And across the Atlantic, a new coalition government in Finland will be led by five women, four of them under 35. Their top priority: fighting climate change.

Many of these young people still receive torrents of scorn and harassment based on their age and gender — Thunberg, who has Asperger’s syndrome, also deals with ableist abuse from online trolls and Fox News commentators alike. But the fact that she’s been named Person of the Year (in a story that gives shoutouts to many other teenage activists) is a reminder that even legacy publications like Time magazine are taking girls and young women seriously as a political force in a way that was unprecedented just a few years ago.

Thunberg first learned about climate change in school at the age of 11, according to Time, after which she fell into a deep depression. The only thing that helped was action — she convinced her family to eat less meat, grow their own food, and give up flying. Then, in August 2018, she began skipping school to protest outside the Swedish Parliament with a sign reading, “School Strike for Climate.” She was all alone at first, but people began to join her, and soon students across Europe were striking for climate action.

This September, Thunberg and 14 other young people sued five countries — Germany, France, Brazil, Argentina, and Turkey — for failing to take sufficient action against climate change. The countries, the activists said, were not committed to cutting emissions enough to keep global warming under 2 degrees Celsius, a threshold many say is necessary to prevent widespread heat waves, rising sea levels, and more, according to CNN.

In a speech before the United Nations Climate Action Summit that same month, Thunberg lambasted world leaders for essentially destroying the future for young people. “You have stolen my dreams and my childhood with your empty words,” she said. “We are in the beginning of a mass extinction, and all you can talk about are your fairy tales of money and eternal economic growth.”

Many media outlets have made Thunberg the face of the youth movement against climate change, but she has always made clear that she is just one of many activists. Margolin, for example, co-founded Zero Hour after being inspired, in part, by the fight to protect the Amazon rainforest in Colombia. “I fight not so much for myself but for my family back home in Colombia, who are experiencing the effects of fracking, and for the activists back in Colombia who are putting everything on the line to protect the Amazon,” she told Vox’s Nylah Burton earlier this year.

Bastida, meanwhile, helped lead students in September’s climate walkout in New York City, which drew at least 60,000 people. (Attendance was helped by the fact that Bastida and others convinced city officials to give students permission to leave school for the protest.) Originally from Mexico, Bastida told Burton that when it comes to environmental degradation, “The first ones to get affected are Indigenous communities who are displaced because of infrastructure and disrespect of the land.”

It’s no surprise that young women are leading the charge against climate change: As the planet faces warming levels that could leave millions in poverty and vulnerable to extreme weather disasters, young people are the ones who will bear the burden if those currently in power do not act.

Thunberg said she drew her inspiration, according to Time, from the young activists at Marjory Stoneman Douglas High School in Parkland, who organized nationwide protests for gun safety after the shooting of their classmates. Like Thunberg, some of those activists became household names, including González, who last year wrote an op-ed in the New York Times and appeared on the cover of Variety.

González started the Twitter account @Emma4Change to speak out for gun safety. More recently, she’s used it to promote voter registration. She’s also become known for her iconic shaved head — she told Variety she made a PowerPoint presentation to convince her parents to let her adopt the style, explaining, “It was too hot in Florida. My hair was heavy.”

While these young people became known for working to spur government action through protest, others are running for office and winning. Ocasio-Cortez was 29 when she became the youngest woman ever elected to US Congress, winning her seat as part of a blue wave that included victories for many other women of color, including Reps. Sharice Davids (now 39) and Ilhan Omar (38). In Congress, Ocasio-Cortez and her fellow progressive representatives have advocated for a number of issues important to young people, including student debt relief and the Green New Deal.

It’s not just the United States — Sanna Marin of Finland made headlines this week when she was elected by her party as the youngest prime minister in the world, as well as head of a coalition government in which four out of five leaders are women under 35. That government is expected to make climate change one of its top priorities, with the goal of making Finland carbon-neutral by 2035, according to the New York Times.

Young female activists are getting attention, but is their message really being heard?

With such visibility, it’s no surprise Thunberg and other young women have also been the focus of misogynistic and ageist attacks. Thunberg in particular has been attacked after being open about the fact that she has Asperger’s syndrome. And earlier this year, the conservative Media Research Center tweeted out a video of Ocasio-Cortez talking about the need for reducing emissions, with the mocking headline “More Shallow Thoughts With AOC.” (The congresswoman joked that the group was actually just helping her spread her message.)

I love everything about this GOP attack ad.

Republicans underestimate my intelligence bc I invite people into my home & talk about policy in plain English instead of DC jargon.

They think that’s dumb, so they end up paying for ads that spread & explain our policy positions. https://t.co/6XC1YdyKDU

Still, Thunberg and other young women are getting attention from both the media and world leaders in a way young female activists of generations past often did not. Tellingly, Time’s youngest Person of the Year before Thunberg was Charles Lindbergh, selected in 1927 at the age of 25 (the first Woman of the Year, Wallis Simpson, was named in 1936, one of only four women given the title as individuals before 1999).

The cover of Time magazine is one measure of mainstream influence, or at least recognition. But as Thunberg would likely be the first to note (and as others have pointed out), such coverage doesn’t necessarily translate to actual impact. The Swedish activist told an audience at the UN climate conference this week that people are focusing too much on quotable tidbits from her speeches and not enough on real action to reduce emissions.

“I’ve given many speeches and learned that when you talk in public you should start with something personal or emotional to get everyone’s attention, say things like ‘our house is on fire,’ ‘I want you to panic,’ and ‘how dare you,’” she said. “But today I will not do that, because then those phrases are all that people focus on. They don’t remember the facts, the very reason why I say those things in the first place.”

Today, Thunberg and other young female activists finally have the world’s attention. But as Thunberg herself has pointed out, hearing these voices is only part of the battle — whether people in power actually do something in response to their words remains to be seen.

Do Americans still believe in their democracy?
Why disaster relief is so hard
What Joe Biden won — and what he didn’t
A new study from Rwanda is the latest evidence for just giving people money
Avengers: Endgame is a Marvel miracle
How anti-vaxxers are thinking about a Covid-19 vaccine