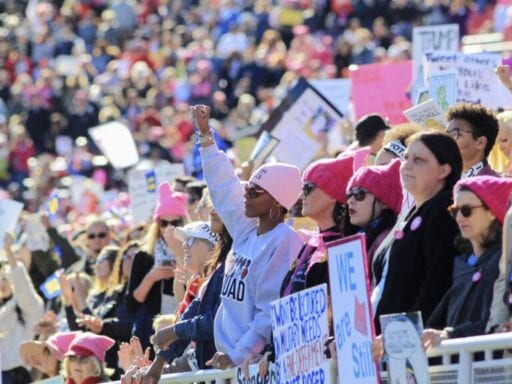 A slew of millennial women could make their way into Congress this fall.

The 2018 midterms could sweep Democrats back into power in Congress. But that might not be the only change: Young, mostly Democratic women running for Congress in districts across the country could also win and take their place in a body historically dominated by older men.

The effects of their involvement could reshape American politics far beyond 2018.

Already, their candidacies have not only transformed their own races, but they’ve also affected the broader political landscape. Twenty-nine-year-old Alexandria Ocasio-Cortez’s stunning upset of Rep. Joe Crowley made her a political star. Abby Finkenauer, 29, a fundraising powerhouse, is gearing up to be the first woman elected to the House of Representatives from Iowa. Lauren Underwood, a 32-year-old registered nurse and former HHS adviser, is the first African-American woman to win a party nomination in her Illinois district.

And they’re running in some of the most competitive races: 31-year-old nonprofit executive Katie Hill is duking it out for a seat in California’s 25th Congressional District — a race that Cook Political Report rates as a toss-up.

For decades, younger women were less likely than young men to be involved in politics pretty much across the spectrum. Data showed they were less likely to run for office, contribute to campaigns, or contact public officials. (They were and continue to be more likely to vote, however.)

This year, some of these long-held patterns are changing. Surveys are finding that young women are increasingly more likely than young men to attend protests, donate to a political candidate, and — in some cases — launch campaigns of their own.

The young women running for office in 2018 — predominately as Democrats — aren’t only upending the demographic makeup of different contests; they’re also changing the kinds of messages and policies up for discussion.

The effects are likely to last past 2018: Once people get involved in the political process, they’re much more likely to stick around, suggesting that this year’s boost could transform an entire generation’s relationship with public office.

There is a massive outpouring of interest from young women candidates

Across men and women of different age groups, young women are the ones who have disapproved of the presidency of Donald Trump the most, according to a number of polls. And this disapproval is translating to major political pushback.

Run for Something, a Democratic organization aimed at getting first-time candidates under 35 to run for elected office, heard from more than 15,000 people interested in running in the wake of the 2016 election, according to The Cut. Of that number, 60 percent were women.

Similarly, Emerge America, a group that provides training courses for Democratic women interested in running for office, has seen an 87 percent uptick in applications over the last year, according to the Christian Science Monitor. “We have never seen this kind of interest in running for office,” Emerge America’s Andrea Dew Steele told the CS Monitor.

According to Alexandra De Luca, a spokeswoman for Emily’s List — a Democratic group that helps train and support women candidates — half the participants at trainings that the organization has done since the presidential election have been under 45. Of the 40,000 women the group has heard from since 2016, roughly half of those have also been under 45, she notes.

As the Wall Street Journal reported, 10 women under 40 were named on the Democratic Congressional Campaign Committee’s “Red to Blue” list this cycle, compared to just one who was on it in 2008.

This surge marks a sharp contrast with the current makeup of Congress.

Only five millennials are currently elected to the House, including two women: Reps. Elise Stefanik and Tulsi Gabbard. As Bloomberg reports, if the composition of the House actually reflected the general population, there would be 97 millennial representatives.

The gender composition in both chambers is also still incredibly lopsided, according to data from the Center for American Women and Politics. Congress remains heavily male, with women making up just 20 percent of the seats across both chambers.

“This place is stuck in another era, and it’s time to get it to the place where the rest of America is,” Sen. Amy Klobuchar told reporters following the confirmation vote on Supreme Court Justice Brett Kavanaugh.

A host of millennial women — include some who are under 30 — are seeking to change this dynamic as they vie for office this fall. And much like Ocasio-Cortez — who noted that “women like me aren’t supposed to run for office” in one of her campaign videos — they’re showcasing their age, gender, race, and other facets of identity as a strength.

“They said the State House would be too tough for a young lady,” Finkenauer, the Democratic nominee in Iowa’s First District, says in one of her campaign videos. “And then they said a ‘girl’ paying off her student loans wasn’t tough enough to beat a millionaire for Congress.”

Underwood, too, has emphasized how African-American candidates rarely succeed in predominately white districts, like the one where she’s running — a trend that she’s seeking to change.

“For so long, African-Americans have only had elected representation from those traditional districts that are historically Black, maybe urban. But not all of us live in all those majority-minority districts,” she said in a Refinery29 interview, adding that she’s striving to challenge this assumption. “‘Hey! I grew up in this predominantly white area and my family has been here for years. I’m a leader and I have ideas,’” she said.

Katie Hill of California — who is bisexual — has not shied away from discussing her sexual orientation, either. “A lot of people told me I should be quiet about being bisexual and not say anything, but for me this is a part of my identity,” she told ThinkProgress. “We have a Republican Congress that wants to restrict LGBTQ rights and a Supreme Court that could overturn gay marriage.”

Young women are also leading the charge as activists and voters

The growing number of women under 35 running for Congress coincides with a bigger shift among millennial women, who accelerated sharply to the left around the 2016 election, according to data from Pew.

In January 2017, just months after Trump’s election, a group of women activists organized what would become one of the largest protests in US history. The Women’s March ended up drawing more than four million people across the globe and became a symbolic act of solidarity by many who took issue with Trump’s presidency. It also kicked off a wave of grassroots activism across the country that’s continued to reverberate in the months since.

Young women are also more excited about voting than young men: A survey conducted by PRRI and the Atlantic in July found that 56 percent of women ages 18 to 34 said they were either definitely or probably planning to vote in the upcoming midterm elections, compared to 47 percent of men in the same age bracket.

Relative to older age groups, however, younger voters are still seen as much less engaged at the ballot box. The PRRI/Atlantic survey also found that only 28 percent of young adults were absolutely certain they would vote in the 2018 election, compared to 74 percent of seniors.

This spike in political engagement could mean that young women will play a pivotal role in fueling a so-called “blue wave” this November, a raft of wins that could help Democrats regain control of the House. What’s more, they’re also part of a voting bloc that’s more likely to back women for Congress.

“I think the blue wave is a blue swell and we will have to work hard for it,” said Democratic pollster Celinda Lake. “In the final analysis, the key vote may well be the turnout of millennial, young women. They are voting very Democratic and very much for women candidates.”

But young women aren’t just shaking up age and gender dynamics. They’re shifting the kinds of conversations that are taking place, including by emphasizing health care and abortion rights, both issues that have had an outsized effect on women’s lives.

Underwood, a former Obama adviser who helped implement the Affordable Care Act, cites incumbent Rep. Randy Hultgren’s vote against the ACA as a key reason she decided to run. Ocasio-Cortez has catapulted the idea of Medicare-for-all further into the spotlight. And Finkenauer has championed the need to move toward universal health coverage, while criticizing a six-week abortion ban that the Iowa governor recently signed into law.

De Luca noted that many of these policy conversations can be further informed by personal experiences with issues like reproductive healthcare. “Democrats in general this cycle are laser-focused on sharing personal health care stories,” she said.

Research has repeatedly shown that increasing the number of women in Congress has a substantive impact on how policy is crafted. As Vox’s Sarah Kliff reports, women lawmakers are more likely to back legislation that specifically benefits women. Researchers have also found that a woman legislator passed twice as many bills as a male one, on average, in a recent session of Congress.

In addition to their policy achievements, women taking on high-profile positions of power also alter public perceptions regarding the kinds of roles women can take on, spurring others to consider pursuing higher office down the road.

By dialing up their participation in politics, young women are setting up a self-perpetuating phenomenon that ensures even more women will get involved in the future.

Sen. Richard Burr and the coronavirus insider trading scandal, explained
Protestors compare travel ban to dark US periods
Top North Korean official in trouble for failed Trump summit reappears in public
The Mueller investigation is over. QAnon, the conspiracy theory that grew around it, is not.
Sanders and Buttigieg put out preliminary Iowa caucus results showing they both did well
Mark Judge, Kavanaugh’s classmate, says he won’t testify on sexual assault allegations

This week in TikTok: The influencer hair salon that’s under attack

Can a pair of jeans kill the coronavirus?